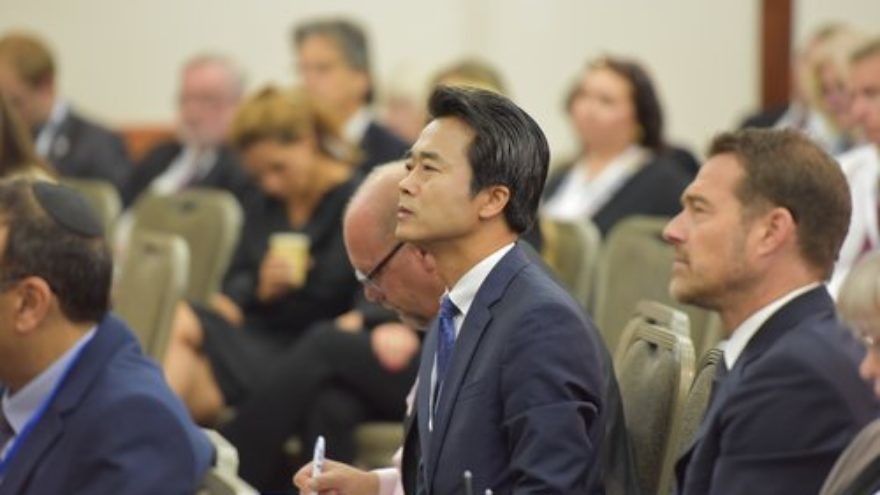 (October 19, 2017 / JNS) Recognizing it is easier to influence those who are more prone to be natural supporters of the Jewish state than it is to sway journalists who cover the Israeli-Palestinian conflict with a perceived anti-Israel bias, the Israeli government this week offered Christian media professionals a crash course in Israel advocacy and diplomacy.

More than 130 journalists from 30 countries converged in Jerusalem for Israel’s inaugural Christian Media Summit, which was sponsored by the Government Press Office and spearheaded by Minister of Jerusalem Affairs and Heritage Ze’ev Elkin.

Christian journalists, many of whom are ideological supporters of Israel, collectively influence billions of potential Israel supporters around the world. Key focuses of the conference included promoting Israel and Jerusalem as a model of religious tolerance and coexistence, as well as countering the inherent biases the Jewish state often faces in international legal forums such as the United Nations and in mainstream media.

Brian Schrauger, a veteran Christian journalist reporting from Israel for the USA Radio Network and JerusalemJournal.net, said Israel “is doing something very, very smart. It’s catering to a group of journalists that don’t often get attention, and it’s educating them. And these are by-and-large friendly journalists that generally support Israel.”

“The journalists that are here have a larger consumer base of readers and viewers that are larger than ABC, NBC, CBS and CNN combined in the U.S. So there is a huge, huge market here,” Shrauger told JNS.org.

David Parsons, vice president and senior international spokesman for the International Christian Embassy Jerusalem, said Christian media “has a vast constituency, not just in the U.S. but around the world.”

According to Parsons, Israel’s government has recognized the value of “engaging with Christian media directly to show them how to report the story better; what are the sources, what are the resources to use.”

“It’s very effective, and very important—and making sure the battle of truth is being won,” Parsons told JNS.org.

Israel as a beacon of religious tolerance

The conference was well-attended by Israeli politicians and thought-leaders, with addresses by Israeli Prime Minister Benjamin Netanyahu and President Reuven Rivlin.

Netanyahu stressed the difficulties that Christians face as persecuted minorities in neighboring countries across the Middle East.

“Israel is the one country in a vast region where Christians not only survive, they thrive,” Netanyahu stated, noting Israel has “no better friends” around the world than Christian communities.

Elkin said Jerusalem “is the ideal place to host this summit, as a model for tolerance and dialogue.”

“The importance of hosting the most influential members of the international Christian media in Jerusalem is paramount,” he said. “As Christianity has its roots in Judaism, these journalists have the unique opportunity to understand that the spurious charges claiming that Jerusalem has no contextual historical attachment to Israel are utterly absurd.”

Parsons said the age of objective and unbiased media coverage is a thing of the past, with most journalists choosing sides in the Israel-Palestinian conflict before they file their content.

“I think there is just dishonesty at a very human level, where you have reporters trying to assert that they are objective, and impartial, when in fact, they are not,” he said.

“We are talking about people who are taking a position of ‘advocacy journalism for social justice issues.’ That is the way many journalists approach this conflict: that you should always root for the oppressed, and you always view the Palestinians as oppressed,” added Parsons, who noted this approach leads many journalists to “even justify Palestinians use of violence against Israel, who they believe is the oppressor.”

A major component of the conference was geared towards explaining how mainstream media have been impacted by “Palestinian propaganda” that includes decades of incitement against Israel by the Palestinian Authority (PA).

Veteran Palestinian affairs journalist and field producer Khaled Abu Toameh seconded Marcus’s message when addressing summit attendees, asserting that “there hasn’t been any attempt by the Palestinian Authority to prepare the Palestinian people for peace with Israel—to the contrary. Ironically, Palestinian incitement intensified after the signing of the Oslo Accords.”

“There is no peace process,” Abu Toameh said.

Abu Toameh advised the Christian journalists to be careful about who they select to help them produce their news content. “If the person you hire to help you produce your piece is an activist for the PLO (Palestinian Liberation Organization),” that will severely affect the report, he said, adding there is “more than one way of telling the story.”

Conference attendee Schrauger said, “It’s been an amazing conference. Israel has brought in its best voices to explain the narrative that exists here in the Middle East. It’s a narrative that the rest of world is not hearing.”

Minister of Education and Diaspora Affairs Naftali Bennett expressed his appreciation that so many Christian journalists accepted the Israeli government’s invitation to participate in the first-of-its-kind summit.

“I want to thank you for being our friends,” he said, “because sometimes we feel alone out there.”