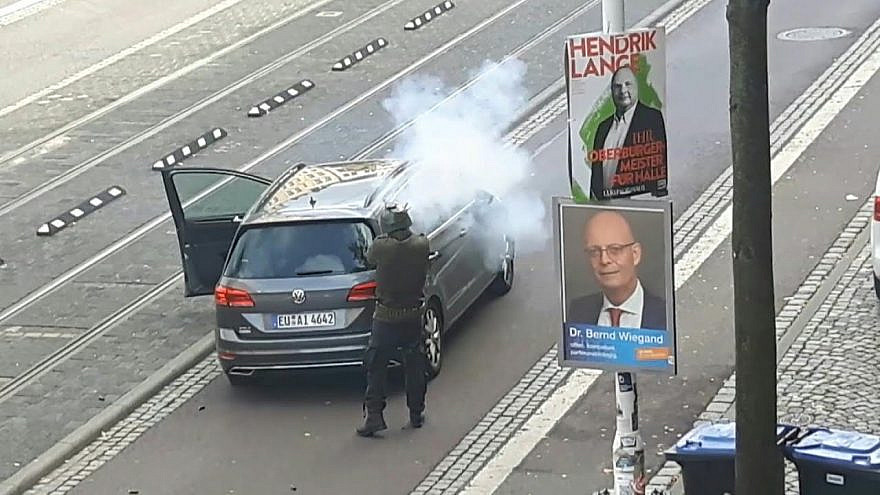 (October 10, 2019 / JNS) Israeli and Jewish leaders issued messages of solidarity and calls for action after a neo-Nazi gunned down two people and injured several others in Halle, Germany, on Wednesday, during the Jewish holiday of Yom Kippur.

“On behalf of the people of Israel, I send condolences to the families of the victims and wishes for a quick recovery to the injured,” Israeli Prime Minister Benjamin Netanyahu wrote on Twitter following the attack. “I call on the German authorities to continue taking determined action against anti-Semitism.”

Israeli President Reuven Rivlin tweeted on Wednesday that he was “stunned and pained by the terrible anti-Semitic murders in Germany today, during the holiest and most important day of the year for all Jews around the world.”

He called on “the leaders of Germany and the free world to bring the full force of law against anti-Semitism and its results.”

The assailant, who has been identified as Stephan Balliet, 27, first attempted to break into a synagogue, but was unable to open the massive wooden doors, which were bolted shut.

After failing to gain entry to the synagogue, Balliet shot a passerby, a woman in her 50s. Minutes later, he attacked a nearby kebab shop with bombs and improvised weapons, killing one. Balliet livestreamed the attack on Twitch, with the 35-minute video being viewed by 2,200 people in the 30 minutes before it was taken down, according to the video platform.

The President of the Central Council of Jews in Germany, Josef Schuster, asserted on Wednesday that “we have not experienced an incident of this kind ever before in Germany.”

“It shows that right-wing extremism is not only some kind of political development, but that it is highly dangerous and exactly the kind of danger that we have always warned against,” he added.

Jewish Agency chief Isaac Herzog said in response to the incident that “the entire world sees and hears what is happening and must understand that there can be no compromise in the fight against hatred of Jews and anti-Semitism.”

“We share in the mourning of the families whose loved ones were murdered, wish the wounded a speedy recovery, and send strength to the worshipers and members of the community who are in deep mourning,” he said.

Herzog went on to say that he had spoken with German Foreign Minister Heiko Maas, “who expressed his deep disturbance regarding the attack on the synagogue in Halle, saying, ‘This is an attack on all of us. We all stand together on the frontlines against anti-Semitism.’ ”

Orthodox Union executive vice president Allen Fagin said in a statement that this “senseless act of anti-Semitic violence was not only a heinous attack on the Jewish community of Halle, but … yet another example of anti-Semitism in Germany, which continues to proliferate. Every Jew has the right to practice their religion without fear of being a victim of terror.” An attack on one Jew is an attack on all, said Fagin, adding that “our prayers and thoughts are with our brethren in Halle.”

Chief Rabbi of Berlin Yehudah Teichtal said, “We stand alongside the community that has been harmed and weep over those murdered. The cruel method of the attacker is indescribable, and especially the fact that it happened on Yom Kippur, the holiest day for the Jewish people.”

He said he learned about the attack in the middle of the Yom Kippur prayers.

“A senior security official approached me in the middle of the Musaf prayer and informed me of the attack. Immediately, the security of our synagogue was increased, alongside other synagogues,” reported the Chabad rabbi.

“We talked about the attack with our synagogue worshipers. We emphasized the great miracle the community had because their door was locked, thus avoiding a much more serious incident, and of course, strengthened their spirit, with a prayer for a year of good news.”