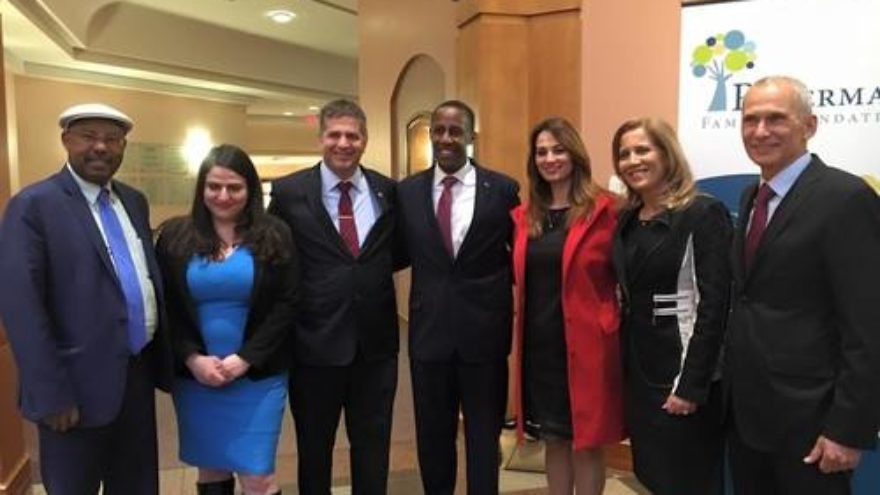 (April 18, 2016 / JNS) The global Jewish community is split between two vast centers of power. One is arguably one of the most successful in Jewish history, both economically and socially, based in North America. The other—in Israel—has helped recreate a Jewish homeland for the first time in 2,000 years. Despite their shared heritage, faith, and values, there also exists a wide gap between the two communities, especially on issues that affect the everyday lives of Jews, from discrimination to security to economic challenges.

The goal of the mission, now in its fourth year, was to meet with American Jewish leaders and U.S. government officials in order to educate the Israeli leaders on the challenges facing U.S. Jewry amid the unpredictable future of the U.S.-Israel relationship.

“The goal [of the mission] is very straightforward. It is to educate the Israeli MKs on the American Jewish community, the pluralism of the community, and how the community relates to each other and its place in America society,” Jay Ruderman, president of the Ruderman Family Foundation, told JNS.org.

Secondly, Ruderman added, “the goal is to education the MKs on the American Jewish connection to Israel and how that is changing.”

Prior to heading his family’s foundation, Ruderman worked at the American Israel Public Affairs Committee (AIPAC), where he said he learned that while many American Jews were well-versed on Israel, the opposite is true among Israelis, especially the political leaders, who had very little knowledge of the American Jewish community and their politics.

“My experience has been that the vast majority of the Israeli MKs do not have any experience with the American Jewish community,” Ruderman told JNS.org, “Some have never been to the U.S. before or had just come as children or teenagers.”

“We live in a time with a lot of changes in the American Jewish community, and these changes are not really understood by Israeli leaders,” he said.

Prior to arriving in Boston, the Israeli MKs met with a variety of Jewish officials and representatives in New York City, including meeting leaders from the Orthodox, Conservative, and Reform movements to discuss tensions between the Jewish dominations and their statuses in Israel, especially relating to egalitarian prayer the Western Wall. They also heard from American students about the increasing anti-Israel sentiment on U.S. college campuses, and met with Jewish members of Congress Eliot Engel (D-N.Y.) and Lee Zeldin (R-N.Y.). In Boston, they met with Massachusetts Governor Charlie Baker.

Ruderman called the meetings an “eye-opening” experience for the MKs, especially hearing from the leaders of the Reform and Conservative movements, which are fairly small in Israel.

“There is a lot of discrimination and misinformation. But when they come to America and meet with the heads of the movement, there are a million and a half Jews who are Reform who feel strongly about their Judaism,” he said. “This is sort of surprising to the MKs.”

Additionally, hearing from prominent American leaders about how they prioritize the Jewish state was meaningful for the Israeli lawmakers.

“During their meeting with Gov. Baker, he mentioned that his first planned trip abroad as governor will be to Israel because of Massachusetts’s strong business ties there,” Ruderman said. “That’s powerful for them to hear.”

The MKs’ U.S. mission is capped off each year with a town hall-style event in the Boston suburb of Newton, which is home to a significant and influential Jewish community.

“While 99 percent of this mission is behind closed doors with private conservations, the town hall event is an important opportunity for the community to come and hear [the Israeli MKs] close up,” Ruderman said.

This year’s town hall, held April 13, took on a new format, with former Israeli foreign minister and peace negotiator MK Tzipi Livni sitting down with The Algemeiner Editor-in-Chief Dovid Efune for a one-on-one interview for the audience.

Efune began by bringing up the largest ongoing news story in the U.S.—the wildly unpredictable 2016 presidential election. According to a poll released by the Ruderman foundation on the same day as the town hall, 33 percent of Israelis feel Donald Trump is the most pro-Israel U.S. presidential candidate, while Hillary Clinton was second with 31 percent, Sen. Ted Cruz (R-Texas) finished third with 6 percent, and Sen. Bernie Sanders (D-Vt.) garnered 5 percent.

Livni refused to weigh in on the American election, as would be expected from any Israeli elected officeholder.

“This is the only question I will not answer,” she said.

Not surprisingly, most of the discussion with Livni centered on her thoughts regarding the stalled Israeli-Palestinian peace process. As Israel’s former foreign minister under prime minister Ehud Olmert, and later a point-person for Prime Minister Benjamin Netanyahu in negotiations with the Palestinians during Netanyahu’s previous governing coalition, Livni said Israel needs to “separate” from the Palestinians, especially in light of the ongoing violence and terrorism.

But Livni was challenged by Efune on how to bring about a two-state solution when “93 percent of people in the Palestinian territories hold anti-Semitic views, according to an ADL (Anti-Defamation League) poll.”

“How do we make your vision a reality in this climate?” he asked.

Livni answered, “What is the suggestion? That we live with all of these anti-Semitic Palestinians in one state? No. The whole idea is to separate us from the Palestinians, to live in two states for two people.”

Livni, who now serves as co-leader with MK Isaac Herzog of the Israeli opposition’s Zionist Union party, also addressed the issue of the Boycott, Divestment and Sanctions (BDS) movement.

At the beginning of the town hall, each Israeli MK was given about five minutes to introduce themselves and discuss some of the issues that are important to them. As expected, there was a wide range of issues and opinions on the security situation, the peace process, economic inequality, women’s rights, and education.

One theme that pervaded most of the MKs’ speeches and the ensuing discussion was the lack of knowledge in Israel about the American Jewish community and its issues.

“Jews in the U.S. know more about Israel than we know about U.S. Jews,” MK Omer Bar-Lev (Zionist Union) said.

While the event was relatively cordial, with most MKs privately chatting and smiling together on stage, it did not pass without some political drama. The most heated exchange of the evening took place between MKs Yoav Kisch (Likud) and Michal Biran (Zionist Union) over a question from the audience on their opinions regarding AIPAC and the controversial left-wing Jewish lobby group J Street.

Biran said she “admired” both organizations, and that she feels it is important for everyone in the American Jewish community to have a safe space where they can “criticize Israel with love.”

While Kisch supported the existence of groups like J Street that frequently disagree with the actions of the Israeli government, he was troubled by the fact that such groups lobby the U.S. Congress against some of Israel’s positions.

“I accept pluralism and different opinions are natural,” Kisch said. “My problem is with their actions against the Israeli government in the U.S. Congress….It is like putting gas on the fire [for anti-Israel groups].”

Biran interrupted Kisch, mentioning how Netanyahu “undermined” President Barack Obama when he spoke directly to a joint session of Congress in March 2015 on the Iranian nuclear threat.

Despite the natural disagreements among the Israeli MKs on issues like J Street, Ruderman said the main goal of the mission is to add a “level of sophistication in the discussion of American Jews among Israelis.”

“When you hear Israeli politicians or leaders condemning the American Jewish community or the Reform movement, those are not people we have brought,” Ruderman told JNS.org.

“The people we have brought have a little bit higher level of sophistication. I don’t think they would be making those statements,” he said.

Ruderman added that most of the feedback he has received from both the latest delegation of MKs and previous missions is that the “trip has changed their view of who the American Jewish community is.”

“That’s what we are trying to do,” he said. “We just want a higher level of discussion in Israel about the American Jewish community.”