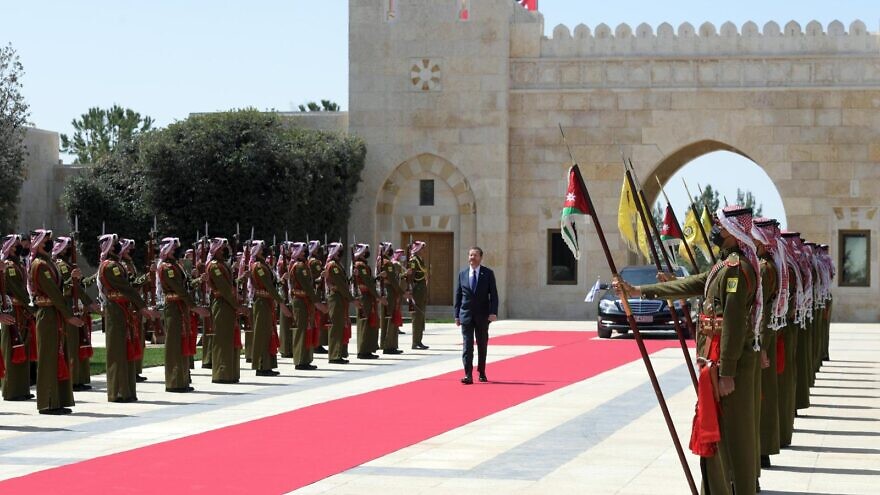 (March 30, 2022 / JNS) Israeli President Isaac Herzog arrived in Jordan on Wednesday for an official visit at the invitation of King Abdullah II. He was received by the Jordanian leader at an official ceremony at the royal palace in Amman.

This was the first public and official visit by an Israeli president to Jordan. Israeli presidents have visited Jordan in the past, but in clandestine meetings that were sometimes reported after the fact.

At the start of their meeting, Abdullah condemned the recent terror attacks in Israel and expressed his condolences to the victims’ families.

Herzog thanked the king for his “warm hospitality and friendship,” and said Israel and Jordan must “fight together against any type of terror and cooperate for the benefit of the security of our nations.”

“We share common values of prosperity and peace, based on our peace agreement, which was carved out by the late King Hussein, your legendary father, as well as by the late Prime Minister Yitzhak Rabin,” said Herzog.

“Together, we must now move forward, and we are offering an alternative. As against the horrible scenes of yesterday, we offer a different alternative of people-to-people dialogue, of respect, of speaking to each other, of showing the region that there could be a different way.”

Noting the upcoming holidays of Easter, Passover and Ramadan, Herzog also emphasized the need to work toward allowing worshippers of all faiths to “practice their beliefs in safety, in security, in calm circumstances.”

During the visit, the two leaders held a private meeting, followed by a bilateral meeting together with their respective advisers.

Several issues were discussed, including deepening Israeli-Jordanian relations, maintaining regional stability with an emphasis on the upcoming holiday period, strengthening peace and normalization as well as the many latent opportunities in relations between Israel, Jordan and the wider region.

Herzog’s visit comes just a day after a visit to Amman by Israeli Defense Minister Benny Gantz, who also met with King Abdullah. The two discussed regional and security challenges ahead of the Passover, Ramadan and Easter, all of which coincide this year.

The day before Gantz’s visit, the Jordanian leader made a rare visit to Ramallah to meet with Palestinian Authority leader Mahmoud Abbas about calming tensions ahead of Ramadan.