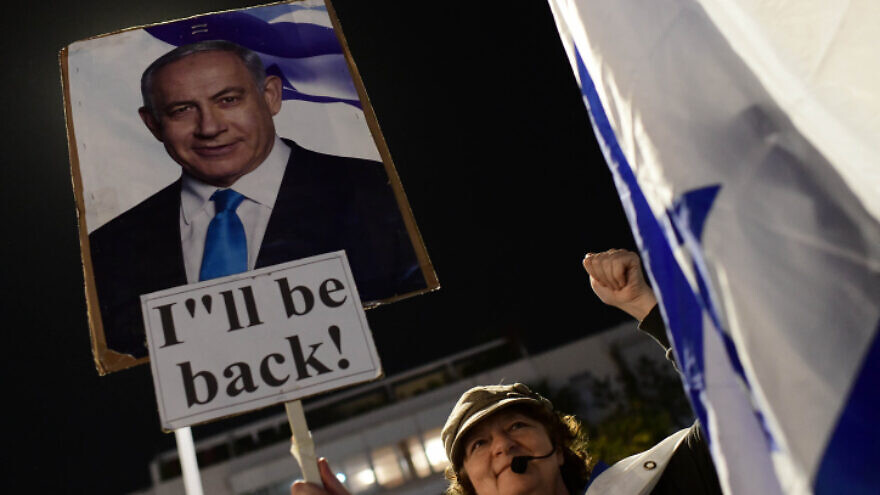 Among those in attendance were right-wing lawmakers, public figures, rabbis, activists from the Likud and the Religious Zionism parties, and bereaved family members.

Addressing the crowd, Likud Knesset member Eli Cohen said, “The State of Israel is in danger. Our parents made aliyah to Israel because they wanted a Jewish state. Our precious state was achieved with the precious blood of Israel Defense Forces fighters, not to be handed over to the Muslim Brotherhood.”

Commenting on the investigation into Border Police officers who shot and killed the terrorist who carried out a stabbing attack in Jerusalem on Saturday, Cohen said, “I send from here a big hug to the male and female fighters who took out the terrorist.”

Alluding to Justice Minister Gideon Sa’ar, head of the New Hope Party and former member of Likud, Cohen added sarcastically, “If there was a justice minister in Israel, he would send the head of the Police Internal Investigations Department home.”

“With the passage of the electricity law [that will connect illegally built Arab homes to Israel’s electric grid], they [coalition members] want sell the Negev [region], but we won’t let them. For the first time since the country’s establishment, there are more than 11 lawmakers who do not believe in a Jewish and democratic state. We have four Hamas supporters in this government. For their hatred of [opposition leader Benjamin Netanyahu] and the Likud, they are willing to sell the state.”

He went on: “Who takes [Prime Minister Naftali] Bennett into account today? Not even the government. They are scared because they came to sell the state and pulled off the biggest con job since the country’s founding. This is a government that harms citizens, a government without compassion. An evil, fat, Tel Aviv-Ra’anana government. In a democratic country, the people are the sovereign, not the legal advisers.”

Likud MK Amir Ohana, who also addressed the crowd, said, “The national camp is facing the greatest democratic heist that is taking place in Israel. Individuals who joined up to bring about the fall in improper ways of the elected leader of the nationalist camp who, God willing and with your help, will be the next prime minister, Benjamin Netanyahu,” he said.

He praised Yamina Party member Amichai Chikli, who has spoken out against the coalition despite the premier’s being the leader of his political party.

Ohana said the media, whose goal is a left-wing government and believes that any means justify that end “has dedicated itself to the great democracy robbery.”

Religious Zionism Party head Bezalel Smotrich wished a good evening “to the Israel that believes in the State of Israel, the Land of Israel, settlement of all of the land, our Israel Defense Forces [and] the Holy One, blessed be he.”

He said, “We are the majority that, God willing, will return to lead Israel for many years to come.”