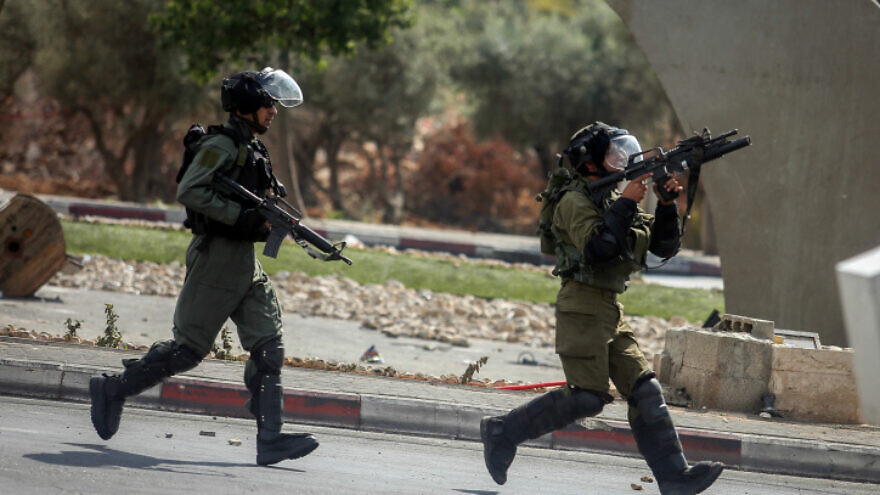 (May 15, 2022 / JNS) An armed Palestinian was shot by Israeli forces on Friday after hurling a rock at and attempting to force his way into a civilian vehicle on a road near Beit El, according to the Israeli military.

After failing to enter the car, the suspect attempted to flee the scene but was pursued by a passing soldier who had witnessed the attack. In a video released by the IDF, the suspect can be seen approaching the soldier wielding what appears to be a large rock. The soldier then opens fire at the assailant’s lower body, neutralizing him.

“The suspect was found to have a knife and bottle of acid in his possession,” the Israel Defense Forces said in a statement.

The suspect was evacuated to the hospital for treatment, according to the IDF.

This morning, a suspect hurled a brick at an Israeli civilian vehicle & attempted to break into it near Bet El.

Our soldiers neutralized the suspect, who was then taken to a hospital for treatment.

The suspect was found to have a knife & bottle of acid in his possession. pic.twitter.com/DFVOx8wgbC

Also on Friday, the Israel Police foiled an attempted terrorist attack in the country’s Sharon district.

According to a police statement, a Palestinian resident of Tulkarm entered Israel illegally, armed with a knife and a written will stating his intention to carry out an attack.

The suspect was arrested next to Route 444. Officers from Taibe Police Station together with municipal police had responded to reports of a suspicious individual wandering in the area with a rock in his hand, police said.