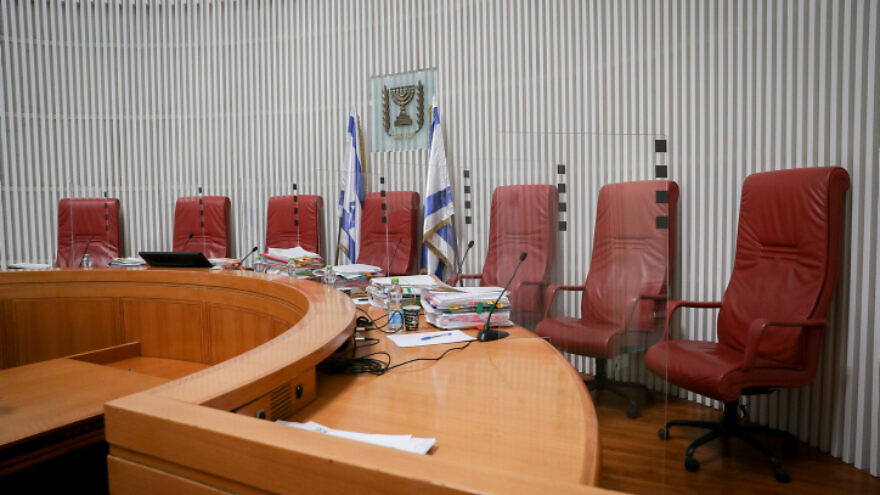 View of the Supreme Court in Jerusalem before a court hearing on the denial of citizenship for two Arab Israelis who carried out terrorist attacks on Feb. 8, 2022. Photo by Flash90.
Republish this article
1207 WORDS
Spread the word.
Help JNS grow!
Share now:

(April 14, 2022 / JNS) In a groundbreaking decision, the Israeli Supreme Court on Sunday ruled that Israeli victims of terrorism and their families can now sue the Palestinian Authority for damages. This decision is groundbreaking because it removes the onus from the victim to prove that the P.A. was involved. The fact that the P.A. pays a salary to the terrorist is enough to prove that it is responsible.

Director of legal strategies at Palestinian Media Watch Maurice Hirsch told JNS what the court’s decision says is that the P.A. payments to terrorists “are so unique in their nature that you have a systematic entrenched-in-law system for paying a reward to terrorists.”

Retrospective ratification can best be explained as when someone performs an action and a third party comes along and says, “I take responsibility for that action.”

The Supreme Court therefore decided that the P.A. payment system is so singular in its nature that it is appropriate to invoke the doctrine of retrospective ratification.

Israel collects these funds on behalf of the P.A. under the terms of the 1994 Paris Agreements, part of the Oslo Accords.

Hirsch also explained that victims of terrorism have always been able to sue the P.A. for damages, but they had to find a way to connect the P.A. to the incident in which their loved one was killed or injured.

“What the new decision says is that even in the absence of any other means of connecting the P.A. to the terror attacks, the payment system provides that basis,” he said.

Hirsch lauded the court’s decision and said terror victims now have a better chance since “the ability to make good on decisions against the P.A. is relatively [sound].”

“The question until now has been: What do you do with judgments against individual terrorists?” he said. “This decision opens the door to find the P.A. responsible, and there is [a higher] chance to get money from the P.A. via the taxes” that Israel transfers.

However, Hirsch said, since this type of application of the doctrine of retrospective ratification is so distinctive that they did not even find previous such cases.

“This opens the door for another round of legal discussion because it is so innovative in its content,” he said. “It is likely the P.A. will put in a request for an additional hearing, and there is a good chance the Supreme Court will allow that hearing to take place, most likely with an expanded panel of judges.”

Together with this new court ruling, there are additional angles to fighting terrorism and holding terrorists responsible.

Israeli State Comptroller Matanyahu Englman said on Tuesday that “there is one simple and effective tool that the State of Israel does not use in the fight against terrorism: filing civil lawsuits against terrorists.”

Englman said it doesn’t matter whether the terrorists are residents of the State of Israel or Palestinians.

“In such a case, it can be done by offsetting funds from the Palestinian Authority,” he said. “Terrorists need to understand that terrorism is not profitable, even economically.”

According to Englman, Israel compensates victims of terrorism. In 2019, the National Insurance Institute paid NIS 540 million ($169 million) to victims. But in 2018-19, the state did not file civil lawsuits against the terrorists at all.

Englman called on Minister of Justice Gideon Sa’ar and Attorney General Gali Baharav-Miara to exercise the tools of civil enforcement.

“It should be emphasized that this does not require changes in legislation,” he said. “You just have to decide that you are enforcing and enforce. This is essential for both justice and the war on terror.”

‘Compensate the victims to some extent’

In another example of how Israel can fight terrorism through deterrence, on Sunday the government approved the establishment of a committee to examine removing state benefits such as pensions from the families of Israeli citizens who committed acts of terror.

The current wave of terror that Israel is experiencing began in Beersheva on March 22, followed by attacks in Hadera on March 27, Bnei Brak on March 29 and Tel Aviv on April 7.

The Beersheva attack, in which four Israeli civilians were murdered in a combined car-ramming and knife attack, was carried out by an Israeli Bedouin from the town of Houra who was shot dead by armed civilians. The Hadera attack, in which two Israeli Border Police officers were murdered, was carried out by two terrorists from the northern Arab Israeli city of Umm el-Fahm. They were subsequently shot dead by members of a Border Police unit who were nearby.

If the committee findings eventually become a law, the families of these Israeli terrorists will lose all state benefits.

According to Yossi Kuperwasser of the Jerusalem Center for Public Affairs, “the P.A. law, according to which it pays salaries to terrorists, turns the P.A. into a terror entity.”

“This means that the P.A. can be held accountable for all terror attacks and should compensate the victims to some extent,” he told JNS.

In May 2020, the Jerusalem District Court placed a lien on NIS 450 million (nearly $140 million) in P.A. tax revenues after ruling against the authority in several lawsuits, charging it with responsibility for numerous terror attacks.

Israel is not alone in its position that the P.A. rewards terrorists and encourages terrorism.

In December 2019, the International Criminal Court published its Office of the Prosecutor Report in which it mentioned, for the first time, that the P.A. could be guilty of war crimes over payments to terrorists.

Israel has also worked together with the United States to pressure the P.A. to stop the payments to terrorists. The Taylor Force Act and the Anti-Terrorism Clarification Act (ATCA) prohibit funding to entities that fund terrorism.

ATCA of 2018, and the Promoting Security and Justice for Victims of Terrorism Act (PSJVTA) of 2019, are two amendments to the Anti-Terrorism Act (ATA) that have significant implications on American aid to the Palestinians and U.S. courts’ ability to exercise jurisdiction over Palestinian entities.

PSJVTA seeks to force the P.A. to pay damages to American terror victims and their families, whether or not the P.A. receives U.S. aid.

According to Kuperwasser, while the United States does put pressure on the P.A. to stop paying salaries to terrorists and their families, “at the same time [the Biden administration] bypasses the Taylor Force Act and provides generous economic assistance to the Palestinians so the P.A. does not have an incentive to stop paying the terrorists.”