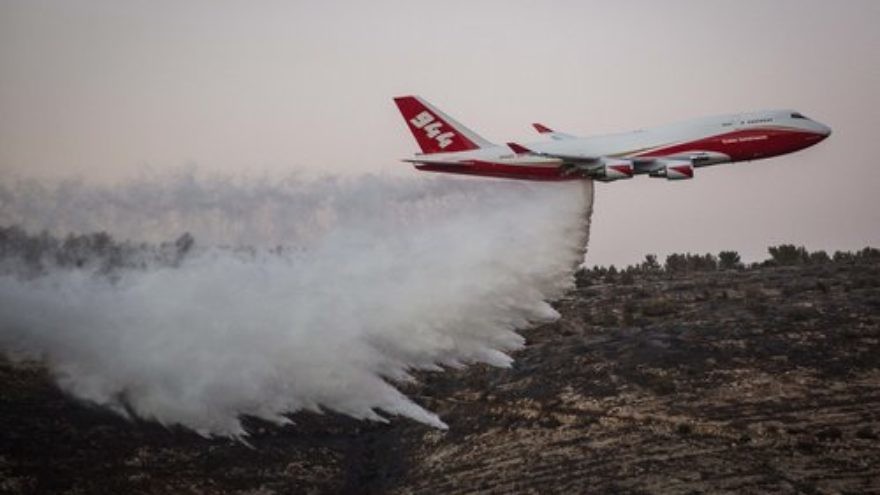 (November 28, 2016 / JNS) Improving weather conditions, a massive influx of support from the international community and efforts by Israeli first responders have enabled the Jewish state to get an outburst of raging wildfires under control.

This week’s fires are expected to be among the costliest in Israeli history, with unofficial preliminary estimates projecting about $520 million in damage. The direct damage to Israeli homes is reportedly estimated to be more than $182 million, while destruction to public property such as roads, electrical power systems and other infrastructure amounts to at least $78 million.

“These damages are on an enormous scale, the likes of which we have not encountered in any natural disaster in Israel’s history—only in wars,” said an official at the Israeli Finance Ministry, Yedioth Ahronoth reported. “The final calculations of the damages caused by the fires—both to the state’s coffers and to the public in general—could only be done weeks after the event. These are very complicated calculations.”

Haifa, Israel’s third-largest city, was under considerable threat from the fires. More than 60,000 people were evacuated Thursday from the city as flames burned nearby. Haifa residents were able to return home Friday after fire crews were able to get the flames under control.

“I salute all those who took part in dealing with this crisis, in extinguishing the fires, and in guarding life and property,” Netanyahu said. “We have built an impressive ability to fight fires on the ground and from the air and it proved itself. I do not want to imagine what might have happened if we hadn’t built this ability.”

The thousands of fires that erupted across Israel came largely as a result of extremely dry and windy weather conditions, but also from attacks by arsonists, who likely used the weather conditions as a means to inflict heavy damage on the Jewish state.

Netanyahu said that a “considerable number” of the fires were likely ignited by arsonists.

“Every fire that was the result of arson or incitement to arson is terror in every way and we’ll treat it as such,” he said. “Anyone who tries to burn parts of the state of Israel will be severely punished.”

In response to the fires, the international Jewish community stepped up its efforts to provide relief to affected Israelis.

More than 32,000 acres of land were reportedly destroyed and 180 people were hospitalized with injuries. In Haifa alone, 700 homes were damaged, 37 were destroyed and 400 were deemed uninhabitable. At least 569 homes burned down throughout Israel, according to the Jewish National Fund (JNF), which launched an emergency response campaign “for the intensive reforestation of areas destroyed by fires, as well as critically needed firefighting trucks and equipment.”

“For a week, our beloved homeland was engulfed in devastating fires forcing hundreds of families to abandon their homes on the front lines,” JNF CEO Russell F. Robinson said. “We are on the ground in Israel every day improving lives, but now we are needed more than ever.”

The Jewish Agency for Israel, with help from the Jewish Federations of North America, announced that it will provide immediate financial assistance of $1,000 per family to Israeli families who cannot return home.

“At trying times like these, world Jewry feels closely connected to what is taking place in Israel and comes to our help without hesitation,” Jewish Agency Chairman Natan Sharansky said. “We are proud of our partners in Jewish communities around the world, and particularly in North America, and appreciate their solidarity when it matters the most.”

The international community, including several of Israel’s Arab and Muslim allies, were instrumental in helping the Jewish state combat the flames.

Israeli opposition leader Member of Knesset Isaac Herzog also thanked the Palestinians for their help, saying that “from this tragedy, there is a glimmer of hope that things can be different.”

The show of solidarity from Arab and Muslim allies was a welcome sign for Israel after Arabic-speaking social media users had used the hashtag “Israel is burning” to celebrate the fires that ravaged the country.

Several of Israel’s close allies in Europe, as well as the U.S., also sent firefighting equipment. America dispatched its Boeing 747 Supertanker, the largest aerial firefighting aircraft in the world. The supertanker is capable of carrying up to 19,600 gallons of fire retardant or water.

The Conference of Presidents of Major American Jewish Organizations expressed gratitude to the countries that assisted Israel.

“Among those nations sending firefighters and equipment were Azerbaijan, Bulgaria, Croatia, Cyprus, Egypt, France, Greece, Italy, Jordan, Palestinian Authority, Romania, Russia, Turkey, Ukraine” and the U.S., the Conference of Presidents said in a press release, noting that Israel “has often responded when other countries faced natural disasters or violent attacks.”

“The outpouring of international support for Israel in response to the widespread threats to the safety and property of tens of thousands of Israelis is an example of international cooperation at its best,” said Conference of Presidents leaders Stephen M. Greenberg and Malcolm Hoenlein.