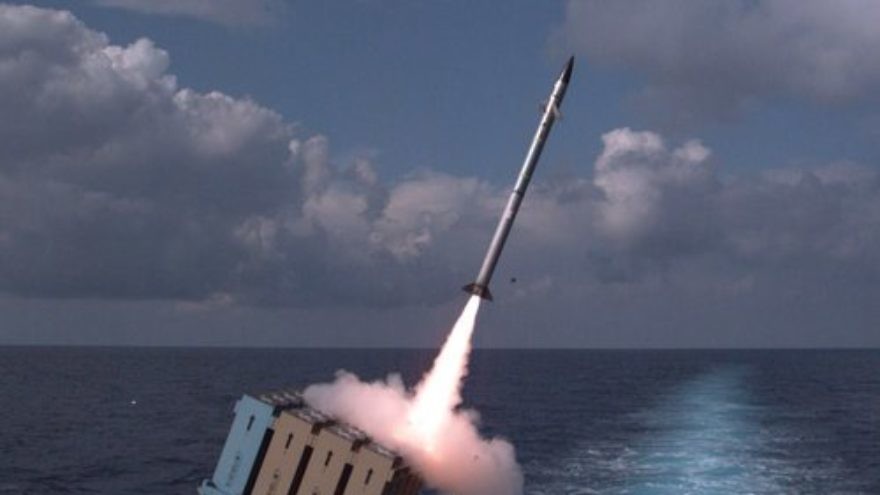 (December 5, 2017 / JNS) The Israeli Navy has a new tool at its disposal to defend the country’s offshore gas rigs in the Mediterranean Sea, which are under threat from the Hezbollah and Hamas terror groups.

The Iron Dome anti-rocket system generated global headlines in 2014, when it successfully defended Israeli cities from Gazan rocket attacks for more than 50 days. Now, a sea-based version of Iron Dome is operational.

The system, called C-Dome by its manufacturer, Rafael Advanced Defense Systems, is stationed on board the INS Lahav navy missile ship. This is a Sa’ar 5-class vessel—the largest of its kind in the Israeli Navy.

In the coming years, the navy will install more C-Dome systems on board the Sa’ar 6 missile ships, which are currently being manufactured in Germany. These are designed specifically for the mission of defending the gas rigs, and when they enter service in 2019, they will be the largest ships in the fleet.

The reason Israel is investing so heavily in the protection of the gas drilling rigs is because they are a strategic energy supply and a major future source of national income, when Israel begins exporting natural gas to the world.

But the rigs are vulnerable to enemy firepower. Located in Israel’s Exclusive Economic Zone, they form an attractive target for hostile, well-armed entities that share Israel’s Mediterranean coastline.

Hamas in Gaza, Hezbollah in Lebanon and pro-Iranian forces in Syria could all try to target the rigs with ballistic rockets or missiles.

That’s where C-Dome comes in.

The arrival of a sea-based Iron Dome “enables a multi-layered defense, not only for ground assets but also the sea,” said Lt. Col. Yoni Grinboim, commander of the 137th Iron Dome Battalion, which was set up by the Israeli Air Force to command the Iron Dome batteries stationed in northern Israel. The battalion is also responsible for the the first naval Iron Dome unit.

C-Dome is linked to the INS Lahav ship’s powerful new radar, which can detect a greater number of threats—and at longer ranges—than ever before.

Grinboim said that sending his air force Iron Dome operators to a navy vessel, to work closely with naval personnel, was no minor affair.

The Iron Dome’s operators now have their own stations in the ship’s battle information center—the area where all data comes in and where decisions are made. They work side by side with navy personnel.

Grinboim told JNS.org that there has been a major process of creating “a dialogue with the navy to adapt our battle doctrines and systems. The process included training, and developing [new] doctrines for Iron Dome operators who need to function in a sea environment…we also adapted these weapons for sea conditions.”

The Iron Dome batteries themselves have evolved over the years. Though details on how they have improved are generally classified, Grinboim was prepared to say that  many upgrades have been installed to adapt the system “to the developing threats throughout the sectors.”

“Our working assumption is that in the next war, terror organizations will try to harm Israeli national assets at sea. This strengthens the importance of the sea Iron Dome squadron and its capabilities,” Grinboim said.

Before declaring the system operational last week, the navy fired rockets, simulating an enemy Grad attack from the shore towards the sea. The projectiles were detected by the INS Lahav’s radar and Iron Dome interceptors were fired from the ship’s deck, successfully striking the targets in mid-air.

The head of the Iron Dome program at Israel’s Defense Ministry, whose name is withheld for security reasons, said the trial “simulated several scenarios of rockets fired from shore to sea. The system detected the relevant threats and successfully intercepted them.”

C-Dome does not mark the final word in the story of Iron Dome, according to the defense official, who pledged that Israel would “continue to develop and upgrade the system to deal with additional fronts and relevant threats.”

Grinboim, speaking a day after the C-Dome test, said it “created a new breakthrough because we were able to improve issues that were raised in past trials. We also introduced new technological improvements for the maritime and aerial defense of the country.”

The navy is increasing the range of coverage of the Iron Dome system at sea by linking it up to radars that are on shore.

The INS Lahav has other weapons on board designed to protect the gas drilling rigs. These include Barak 8 surface-to-air missile systems—produced by Israel Aerospace Systems—that are designed to shoot down threatening aircraft (including drones), fast cruise missiles and other weapons that are believed to be in the hands of Hezbollah.

In any conflict, the ship’s battle information center would be buzzing with incoming intelligence and orders. “We will choose to intercept threats with the correct weapons,” Grinboim said.

As Iranian-made weaponry continues to pour into Lebanon and Syria, and Gaza’s domestic rocket factories churn out more projectiles, new defenses like C-Dome should prove crucial for Israel’s ability to stop its enemies from threatening the Jewish state’s new energy lifeblood.