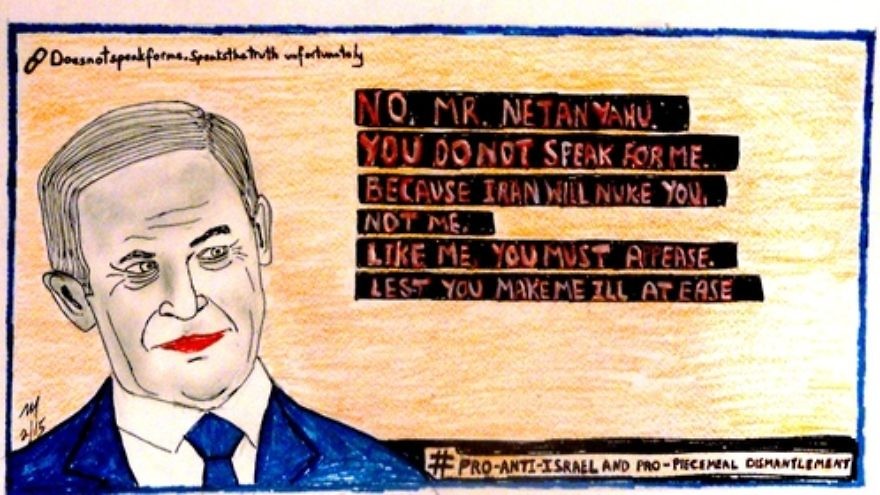 The recent announcement of the P5+1 nuclear deal with Iran has sparked deep concern and even outrage in the Jewish community. In an almost unprecedented moment for American Jewry, the majority of prominent Jewish organizations have lined up in order to combat this deal. This includes AIPAC, the ADL, and various Jewish Federation chapters, including those in Boston and Miami. This historic display of Jewish unity comes because of a clear belief that Israel and the Jewish people have been placed in a life-threatening situation.

But the J Street lobby has broken ranks with that sentiment. Back when the deal’s framework was reached in early April, J Street co-authored a statement with the National Iranian-American Council (NIAC) and the Arab American Institute, welcoming the agreement. Now that the details have become known and almost every major Jewish organization is trying to kill the deal, J Street is undertaking a multi-million dollar campaign to get Jews to support an arrangement that at best keeps Iran nuke-free for about a decade while it gives the mullahs $150 billion to arm Israel’s enemies. This puts J Street in direct confrontation with the more than 80 percent of the Jews of Israel, whose political parties from left to right are fiercely united against President Barack Obama’s deal.

J Street’s campaigning for the Iran deal comes as no surprise to those who have been carefully watching the organization since its inception in 2008. J Street’s policy on Iran has never been aligned with the rest of the American Jewish community. In Americans for Peace and Tolerance’s film “The J Street Challenge,” Professor Alan Dershowitz complains that: “It’s impossible to know what J Street’s position on Iran is. I actually offered to contribute money to J Street if they would answer a series of specific questions about their positions on Iran, and I couldn’t get an answer to any of those questions.”

J Street has a history of taking significant sums of money from anti-Israel sources—and lying about it. For example, J Street continuously lied about its funding from George Soros, who has blamed Israel and the Jewish people for the rise of global anti-Semitism. While J Street President Jeremy Ben-Ami kept denying it, Eli Lake reported in 2010 that J Street acquired $750,000 from Soros’s family. Ben-Ami was eventually forced to apologize for lying.

Even more troubling was the discovery that Genevieve Lynch, a board member of the NIAC, also funded J Street. NIAC is no ally of the Jewish community, and has recently created a 501(c)4 to counter pro-Israel groups’ attempts to halt the Iran deal.

In 2012, J Street spent $100,000 trying to convince lawmakers on Capitol Hill to both ease the rhetoric against Iran and to alter the status of the Palestinian Diplomatic Mission to the U.S.

J Street has also received funding from the Ploughshares Fund, Inc., a global security foundation that supports a “peaceful world, including on free of nuclear weapons.” This same organization spent millions of dollars pushing for Chuck Hagel’s nomination for Secretary of Defense and lobbying to lift sanctions off Iran. According to the Ploughshares Fund’s Form 990 in 2012, J Street acquired $25,000 “to support efforts to educate members of Congress on the consequences that preemptive use of military force against Iran’s nuclear program may have on Israel.” In its Form 990s in both 2013 and 2014, it shows that Ploughshares gave J Street a total of $275,000 “to use a pro-Israel frame to educate members of Congress on the dangers that a military confrontation with Iran could have for both Israel and the U.S., and to promote political solutions to the nuclear impasse.”

Why would a seemingly pro-Israel organization acquire funds from pro-Iran sources to promote a pro-Iran agenda to the United States Congress? One reason seems clear: J Street’s usefulness to Israel’s adversaries is its “pro-Israel frame,” and that can be successfully monetized.

Some of J Street’s senior leaders have at times let the mask slip. Marcia Freedman, a member of J Street’s Advisory Council, told the 2015 J Street Conference delegation, “Israelis should not have a state.” Daniel Levy, one of J Street’s co-founders, told the 2011 J Street conference that if it’s true, as some say, that Israel’s neighbors hate the Jewish state  not for what it does, but for what it is, then “Israel really ain’t a very good idea.”

In addition to its pro-Iran deal lobbying, J Street has often lobbied against laws that most American Jews support. For example, J Street opposed the Roskam-Vargas “U.S.-Israel Trade and Commercial Enhancement Act,” an anti-BDS bill, claiming that it “did not believe it would be appropriate for the United States government to spend time and resources preventing or reporting on such efforts.”

So what should be done about J Street?

Many Jewish Federations and Jewish Community Relations Councils (JCRCs) have accepted J Street within their “big tent.” They have done this in order to keep the peace and to prevent left-leaning Jews from withholding donations. This is still the case after J Street was denied a seat at the Conference of Presidents of Major American Jewish Organizations and after its leader, Ben-Ami, referred to the Jewish Federations and the JCRCs as a “multi-headed hydra.”

But the times have dramatically changed. Israel and its Jews are directly threatened with nuclear extinction and J Street is working hard to enable this catastrophe. With the majority of Jewish organizations coming together to combat this existentially dangerous deal with Iran, now is the time for Jewish leaders who care about unity and who care about Jewish life to show J Street their tent’s exit flap.

Pro-Iran J Street—which is spending millions of dollars to promote a deal that threatens Jewish life, receiving significant sums of cash from anti-Israel and anti-Semitic sources to promote pro-Iran causes, and dangerously undermining the collective Jewish unity needed to block the deadly Iranian threat—should be drummed out of organized Jewish life.

It is time for J Street to go.