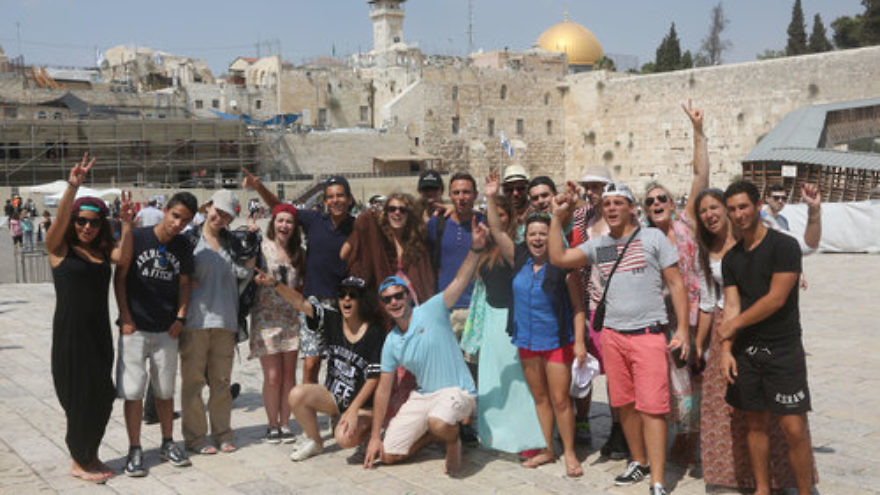 Taglit-Birthright Israel trip participants visit the Western Wall in the Old City of Jerusalem, Aug. 18, 2014. This photo was published with a recent news report on a J Street-driven letter, in which 575 Jewish students stated that Birthright has a policy of not traveling to “the West Bank.” Photo by Flash90.
Republish this article
744 WORDS
Spread the word.
Help JNS grow!
Share now:

What? How can that be?

This strange but true story began when the Israeli Knesset overwhelmingly adopted a law to prohibit the entry of foreign citizens who actively promote the BDS movement against Israel. The law does not prevent Israeli citizens from boycotting Israel. Their right to seek the destruction of their own country remains protected. The law does not block the entry of foreigners who happen to agree with BDS. Their right to believe what they want to believe—and still enter Israel—remains intact. The new legislation keeps out people who actively seek to undermine Israel.

Even though the Anti-Defamation League has described the BDS movement as anti-Semitic, J Street wants BDS activists to have unfettered access to Israel. Fortunately, Israel’s lawmakers have more common sense than the radical-chic activists of Scarsdale and Potomac. Most Members of Knesset from the left-wing Zionist Union party joined MKs from the right in supporting the anti-BDS bill.

Last week, J Street’s campus division, J Street U, mobilized 575 Jewish students to write a letter to Taglit-Birthright Israel, demanding that it refuse to cooperate with Israeli law. The letter demands that Birthright refrain from any screening of applicants for its trips to Israel to determine if they are BDS activists. Or, to put it another way, J Street wants BDS promoters to be able to exploit Birthright and gain access to Israel under its cloak, so they can avoid being caught by the Israeli border authorities.

Then, this gets really interesting.

The 575 signatories described themselves as having already taken part in Birthright trips, or are planning to participate in them in the near future. And the letter mentioned what it said is

Birthright’s policy of not traveling to “the West Bank,” and thus supposedly recognizing “a distinction” between pre-1967 Israel and Jewish settlements beyond the 1967 lines. But when the

Jewish Telegraphic Agency reported on the letter of the 575, it attached to its report a photo of Birthright participants (maybe even including some of the 575 signatories) posing and smiling in front of the best-known Jewish “settlement” beyond the 1967 lines.

That’s right, in the photo we see smiling young Jewish men and women visiting a site beyond the 1967 lines—a “settlement,” in “occupied territory.” It’s on the itinerary of every single Birthright trip. Every J Street U student who has gone on Birthright must have visited it. It’s called the Western Wall.

That’s right—the Palestinian Authority considers the Western Wall “occupied Arab territory.” So does every single Arab country, and most other countries, for that matter. In their eyes, the Western Wall and the Jewish Quarter surrounding it are “illegal settlements.”

It’s a safe bet that many Birthright trips visit other parts of Jerusalem that the Arabs likewise consider “settlements”—French Hill, Ramot, Gilo, Talpiot Mizrach and more.

My point is not that the J Street U kids who visit these Israeli settlements are hypocrites. Maybe some are. Or maybe they’re just naive. Maybe they’re so poorly informed that they don’t even realize that when they visit the Western Wall and many other parts of Jerusalem, they are visiting “settlements.”

No, my point is that they—and the entire Jewish left—are kidding themselves if they think that Jewish settlements that are out in the hills of Judea and Samaria are the obstacle to peace. They’re fooling themselves if they think that getting Birthright to boycott Shiloh or Beit El or Kiryat Arba is going to advance the cause of peace. It won’t. Because if the day ever comes that

Israel tears down Shiloh or Beit El, that won’t bring peace. The Arabs consider the Western Wall and the Jewish Quarter to be “settlements,” too. And if they ever take over those places, then Haifa and Tel Aviv will be next on their march to “liberate Palestine.”