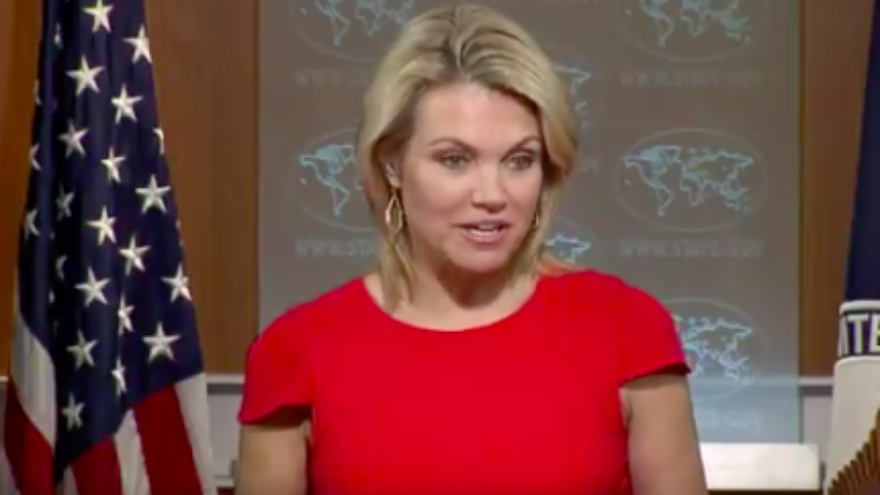 The U.S. government’s reluctance to demand the immediate creation of a Palestinian state has sent J Street into a panic. With its candidates having been defeated in elections on both sides of the ocean, and its proposals crumbling in the face of reality, J Street is trying one last desperate strategy: rewriting history so that it appears Palestinian statehood has been supported by everybody, everywhere, for as long as anyone can remember.

Asked by reporters Aug. 24 about the Palestinian state issue, State Department spokeswoman Heather Nauert said, “We are not going to state what the outcome has to be. It has to be workable to both sides. That’s the best view as to not really bias one side over the other, to make sure that they can work through it.”

Nauert’s statement was simple, logical, and reasonable. But her failure to pledge a full-throated endorsement of the Palestinian agenda sent J Street into a tizzy. The J Street leaders fired off an overheated press release that declared, “For more than two decades, responsible Israeli and Palestinian leaders, U.S. presidents of both parties and virtually the entire international community have understood that a two-state solution is the only viable way to end the conflict.”

Literally, everything in J Street’s declaration is erroneous.

Not only that, but Bush’s support was conditional. In his June 25, 2002 speech about a Palestinian state, Bush said that such a state could come about only if the Palestinian people elected “new leaders not compromised by terror.” The Palestinians, of course, did exactly the opposite.

The only president who has unconditionally and publicly supported Palestinian statehood while in office was Barack Obama. Suddenly J Street’s tally of “more than two decades” is down to eight years.

And anyway, since when is there a rule that every future president is obligated to take the same position as President Obama?

There are 7.44 billion people in the world. Did J Street ask them all? How many farmers in Thailand or truck drivers in Nebraska care whether the Palestinian Arabs have a state or not? Or does J Street really believe that the whole world consists of pro-Palestinian elitists in Potomac and Scarsdale?

There have been two major arguments in favor of Palestinian statehood. Neither of those arguments have stood the test of time.

The first was that Yasser Arafat and the Palestinian Arabs had given up their goal of destroying Israel and had forsaken terrorism. Presumably if they changed their ways, they could be trusted with their own state in Israel’s backyard. That was the basis for the Oslo Accords in 1993. But that argument fell apart when Arafat tried to smuggle 50 tons of weapons into Gaza on the motor vessel Karine A in 2002. It turned out the old terrorist had never changed his ways, after all.

For the past 22 years, they have been residents of the Palestinian Authority, and they vote in Palestinian elections. They will never be Israeli citizens, will never vote in Israeli elections, and will never threaten Israel’s Jewish demographic majority.

The old arguments for Palestinian statehood lie in tatters. The U.S. government’s position simply reflects that reality. J Street, unable to face reality, is trying to change history to suit its agenda. Friends of Israel need to act swiftly to counter such dangerous revisionism.