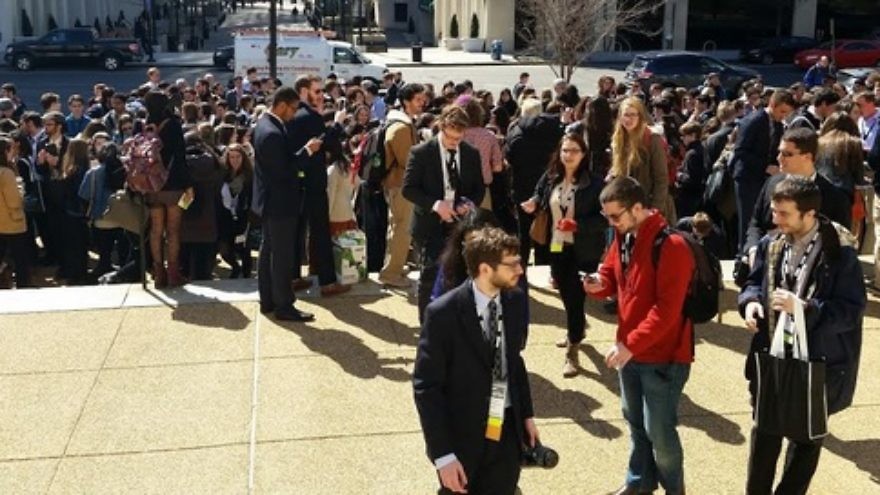 J Street U students gather for a march to the Hillel International headquarters in Washington, D.C., back in March of 2015. Credit: Paul Miller.
Republish this article
751 WORDS
Spread the word.
Help JNS grow!
Share now:

Fingerhut, who heads an organization devoted to fostering Jewish life on more than 550 college and university campuses, was originally scheduled to address J Street U students on Sunday evening. But after learning that chief Palestinian negotiator Saeb Erekat was also speaking at the conference, Fingerhut retracted his attendance.

“My desire to attend the conference was based on my wish to speak at a student-only session directly with the students who will be in attendance, to thank those who have joined in the fight against BDS (the Boycott, Divestment and Sanctions movement) and anti-Semitism on college campuses, and to urge everyone to take up this crucial cause,” Fingerhut said in a statement. “However, after reviewing the full list of speakers, I now realize that any benefit that might come from this opportunity would be overshadowed by concerns regarding my participation amongst other speakers who have made highly inflammatory statements against the Jewish state.”

Erekat has compared the Jewish state to the Islamic State terror group and defended Hamas, claiming the Gaza-based Palestinian terrorist organization is “a political, not a terrorist movement.” He has also referred Israeli Prime Minister Benjamin Netanyahu as a “filthy war criminal.”

Benjy Cannon, national board president of J Street U, believes that Fingerhut used Erekat as an excuse for his non-attendance of the conference. He claimed that “right-wing donors” were behind Fingerhut’s change of heart.

“It’s worth noting that in recent articles Hillel International has actually almost walked back that reason and just said a wide variety of their stakeholders did not think that it was appropriate for him (Fingerhut) to speak at this time,” Cannon told the Haym Salomon Center (HSC).

Jeff Daube—the Zionist Organization of America’s (ZOA) Israel office director—had praised Fingerhut’s decision to pull out of the J Street conference, telling The Jerusalem Post, “Honest [and] open discourse can be productive, but lending cachet to a serial liar-inciter like Erekat, by attending the forum to which he was invited, would be counterproductive.”

But ZOA’s Daube—who noted that Erekat “fabricated an Israeli massacre of 500 in Jenin [in 2002] when none took place”—said, “If J Street is truly interested in promoting understanding, let it promote someone who understands the meaning of truth.”

Cannon explained that the goal of the march was to have J Street U activists “express our disappointment that Eric Fingerhut was unable to join us at the J Street U conference and begin building a path for work we can be doing with Hillel to address this going forward.”

Upon their arrival at the Hillel building, J Street U publicly voiced their concerns via a megaphone, alleging that wealthy pro-Israel activists such as Sheldon Adelson were the influence behind Fingerhut’s decision.

The rally concluded with the students sticking Post-it notes on the windows of the building that read, “Dear Eric Fingerhut, you cancelled on [insert name].” A more detailed preprinted letter was also available to students that allowed them to sign with their name and school.

A few hours after the student march, Fingerhut reportedly sent a letter to J Street informing their board members that he will meet with them.

At a meeting of the Israeli Knesset’s Immigration, Absorption, and Diaspora Affairs Committee last fall, Aviva Slomich—director of the campus department for the Committee for Accuracy in Middle East Reporting in America (CAMERA) media watchdog—criticized Hillel’s willingness to work with J Street’s campus arm. Slomich said that J Street U chapters “describe themselves as pro-Israeli, yet host anti-Israel speakers and hold events that inaccurately describe the situation in Israel,” The Jerusalem Post reported.

Hillel’s guidelines on Israel prohibit collaboration with groups that “delegitimize, demonize or apply a double standard to Israel.”