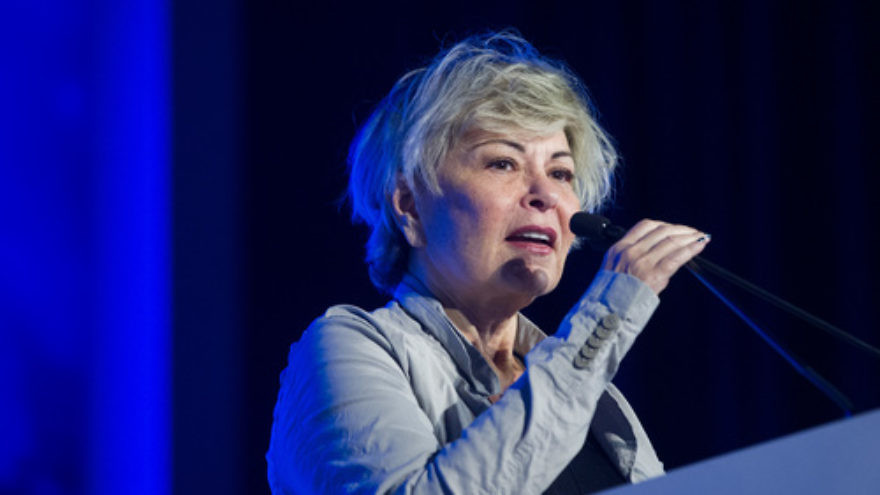 (March 28, 2016 / JNS) Debate on the Boycott, Divestment and Sanctions (BDS) movement is often heard loudest from Jews in America and the rest of the Diaspora, perhaps most notably when it comes to anti-Israel activity on college campuses, rather than focusing on what leaders in the movement’s stated target—Israel—are saying.

Yet “Stop the Boycott,” a March 28 conference in Jerusalem hosted by Yedioth Ahronoth and Ynet, focused on BDS from a fully Israeli perspective. American actress and comedian Roseanne Barr, who gave remarks at the gathering, took the Israel-focused message to heart in a post-conference phone interview.

“I think people should listen to what Jewish people say that live here, in Israel, rather than those people that live in Chicago and especially those that aren’t even Jewish,” Barr, who has become known for expressing strongly pro-Israel sentiments on Twitter, told JNS.org. “Jewish people need to be the ones to talk about it—not [Pink Floyd’s] Roger Waters or the pope. It’s a Jewish subject. The rest of the people should keep their mouths shut and listen for a change.”

Member of Knesset (MK) Yair Lapid, the leader of Israel’s Yesh Atid political party, told conference attendees regarding BDS activists, “We need to go where they are and be better than they are.”

“There is no way that the ‘start-up nation’ could not know how to do a better job than they are doing,” Lapid said, using the nickname has earned due to its penchant for entrepreneurship and innovation. “There is no way we will not be able to reach every campus and debate and win those debates….Why are we not doing it? It’s like the IDF (Israel Defense Forces) being told not to go where they are shooting. If they are shooting, go and fight. We are fighting for this state.”

“We cannot walk around with a racket that kills mosquitoes here on this campus or a little mosquito there—we need to dry up the swamp….It is in our hands to change it,” he said.

The challenge, however, was apparent from one conference panel in which five Israeli politicians from varying parties and perspectives all offered their commentary on fighting BDS, but no fully-baked solutions for the problem.

“This is what Israeli politicians are grappling with,” said Tovah Lazaroff, deputy managing editor of The Jerusalem Post, who covers issues relating to BDS for the English-language Israeli daily newspaper. “If they had a solution, they would have already done it. I don’t think anyone is refusing to do it.”

MK Tzipi Livni, chairperson of the Knesset’s Hatnuah faction, disagrees. At the conference, she accused Prime Minister Benjamin Netanyahu of pandering to his right-wing coalition of 61 lawmakers by refusing to take the steps he knows he should take, “because he’s afraid the education minister (MK Naftali Bennett) will be mad at him.”

Echoing remarks made earlier in the conference by Lars Faaborg-Andersen, head of the European Union delegation to Israel, that “the most effective antidote to the BDS movement is to solve the Israeli Palestinian conflict,” Livni said that when Israel will promote a truly Jewish and democratic state as well as the peace process, it will “create a wall” of protection against BDS.

Livni said she worries that the longer Israel takes to make such steps, the more “in” BDS will become. Equating the BDS movement to veganism, she said, “If it becomes a social and cultural trend, then it will become worse and worse. We have to break this vicious cycle.”

Bennett, who besides his education portfolio is also Israel’s Diaspora affairs minister and the leader of the Jewish Home political party, shot down Livni’s analysis in the first sentence of his remarks. Looking at the last decade, he cited multiple examples of instances when Israel pandered for peace and it worked against the Jewish state.

“In Gaza, we did what the world asked. We went out of there all the way to the ’67 lines….We should have received great applause—that was the purpose of the disengagement,” said Bennett. “We got no affection.”

Bennett called it delusional to believe that if Israel gave land to the Arabs, the world would love and accept the Jewish state.

“Maybe in the short-term, a few days or weeks. But in the long-term, it makes Israel a mockery,” he said. “The world appreciates a nation that protects itself.”

He argued that Israel belongs to the Jewish people—“the land is ours.” That premise, he said, is where any debate needs to start.

Bennett added that there is no solution to the Israeli-Palestinian conflict, so to win the BDS battle, Israel needs to shift the dialogue “to our strong points.”

“Is there anyone here who knows how to solve the conflict? Everyone has tried,” he said. “We are so busy with what we cannot solve. Let’s represent Israel as what we are: a lighthouse, a steady island in the midst of the Arab storm.”

In her talk, which took place directly after that of the politicians, Barr—whose Israel trip was hosted by the Israel education organization StandWithUs—said she sees pandemic anti-Semitism on Twitter. Since many social media users at first didn’t realize her Jewish roots—“perhaps because no one thought I was Jewish being from Utah”—she was privy to hearing uncensored things non-Jews say about Jews, things they might not have said if they knew they were speaking to a Jew.

“It was shocking when I realized that what I considered criticism of Israel became garden variety anti-Semitism,” Barr said. “BDS is right-wing and fascist….BDS [members] do not want peace, nor do they want peace negotiations.”

Barr said she thinks many celebrities are afraid to speak up for Israel because they’re afraid of being maligned in the media, at conferences, on campuses, or even in synagogue.

“I think people are afraid. Have you ever been shouted down by these BDS people?” said Barr. “People are afraid of being targeted….[They are] protecting their lives and their families.”

Lazaroff said most politicians are grappling with what to do in a universe where they believe that BDS is about anti-Semitism and delegitimization of Israel, while everyone else thinks it’s about the Israeli-Palestinian conflict.

“If everyone believes the Israeli-Palestinian conflict is fueling BDS, then you need a solution about and beyond resolving the conflict,” said Lazaroff. “You cannot show that BDS is about delegitimization of Israel while the Palestinian-Israeli conflict is going on.”

The good news, according to Israeli Finance Minister Moshe Kahlon (Kulanu), is that BDS has not yet affected Israel’s economy. At the conference, he described Israel’s economy as strong, with a low unemployment rate. But he did not discount the potential power of the BDS movement.

“A threat is a threat,” said Kahlon, noting that the government has earmarked NIS 118 million ($31 million) to be used to among other things to help compensate any businesses who report being hurt by BDS. “The finance minister has to react to any threat in earnest….The boycott has to be taken seriously.”