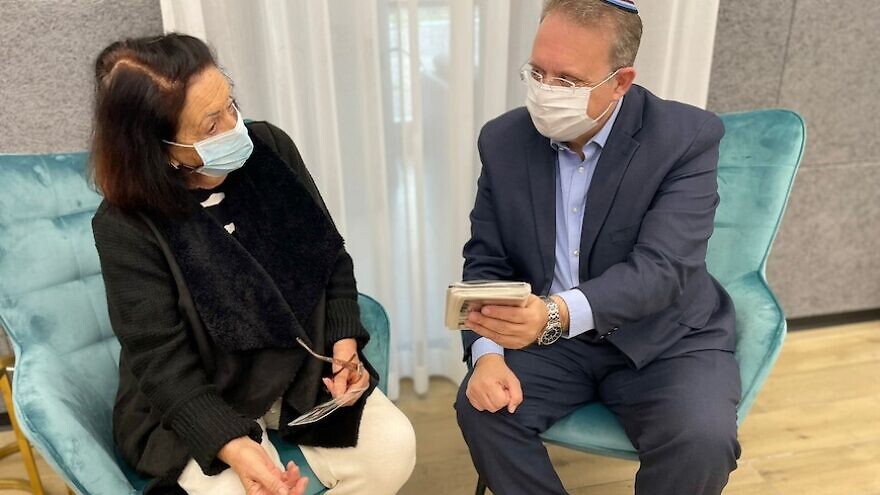 Acting Jewish Agency chairman Yaakov Hagoel with Holocaust survivor Mariah Krupievsky, whose father, Israel Nissman, was murdered by the Nazis in 1941 when they lived in Chernivtsi. In the picture, Hagoel uploaded his name to an Instagram story as part of the Jewish Agency and World Zionist Organization’s "Forever in their Name" campaign. Credit: Jewish Agency for Israel.
Spread the word.
Help JNS grow!
Share now:

(January 25, 2022 / JNS) The Jewish Agency for Israel announced on Tuesday the launch, together with the World Zionist Organization, of a social-media campaign to memorialize the victims of the Shoah.

The “Forever in Their Name” campaign, which will launch on Jan. 26—the day before International Holocaust Remembrance Day—hopes to leverage social media to impress upon a younger generation the magnitude of one of the 20th century’s worst crimes, according to the Agency.

For the campaign, users will memorialize Holocaust victims by uploading the name of one of the 6 million Jews who were murdered to their Instagram story, using a specially designed filter.

“Holocaust survivors are dwindling before our eyes and soon there will be no one left to speak about the horrors of the Shoah. Therefore, it is our moral duty to inspire the younger generation to listen, cherish, and continue telling the stories of the heroes and victims for generations to come,” said Amira Ahronoviz, CEO and director general of the Jewish Agency.

WZO chairman Yaakov Hagoel called the social-media compaign “another step in keeping the memory of the Holocaust and its victims alive for the next generation.”

Hagoel noted that together with rising anti-Semitism around the globe, there have also been frequent attempts to “deny and distort” the events of the Holocaust.

“I call on governments all over the world to dedicate themselves to preserving the memory of the Holocaust and keeping Jewish communities secure. Every Jew deserves to live a life without fear,” he said.