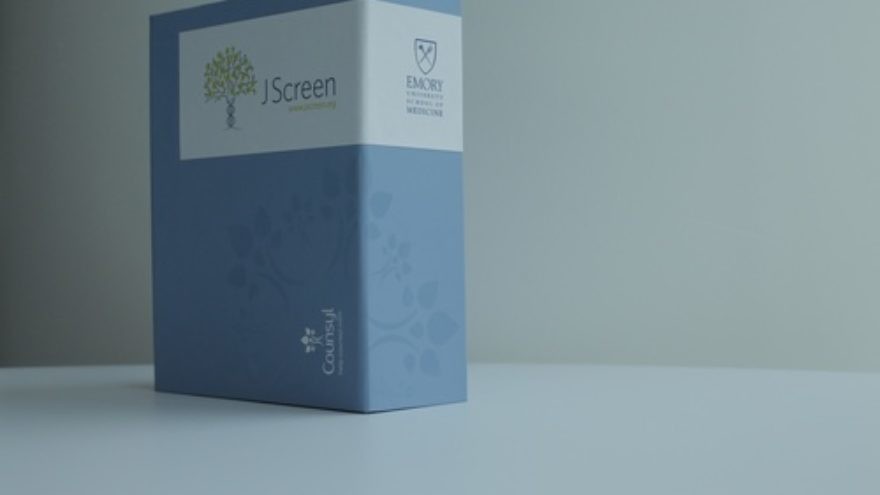 One in four Jews is a carrier of one or more of the 19 known preventable Jewish genetic diseases, according to the Center for Jewish Genetics. Although Sephardic Jews and non-Jews can carry these diseases, they appear twice as often for Ashkenazi Jews as they do for the rest of the population. When both spouses are carriers for a particular genetic disease, the couple has a 25 percent chance of passing the disease on to their children.

Launched in September through the Emory University School of Medicine’s Department of Human Genetics, the goal of the JScreen not-for-profit health initiative is to make those statistics appear less daunting.

A carrier-screening program for Jewish genetic diseases, JScreen aims to give families with Jewish ancestry easy access to information and to provide convenient testing. Employing an easy-to-use kit, JScreen allows individuals to test for the 19 known preventable Jewish genetic diseases—which among others include Tay-Sachs, Canavan, and Gaucher—in their own homes.

While testing for genetic disorders is nothing new, JScreen’s accessibility is. The kit is easily acquired through the initiative’s website at www.JScreen.org, and the test allows a saliva sample to be sent directly for analysis. The program works closely with the individual, obtaining doctors’ orders when needed and providing updates on the status of the sample until results are sent out approximately four weeks later.

Touting the initiative as community-oriented, JScreen’s website provides resources that aim to make couples feel comfortable in proceeding with their family-planning efforts. This includes explaining the reasons for getting tested, as well as statistics.

“JScreen hopes to act as a resource for the community to do genetic testing and make a big impact in growing healthy families,” Patricia Page, a JScreen program senior director, told JNS.org.

The program grew out of the work of Randy and Caroline Gold, who were surprised to find out that their daughter, Eden, had the genetic disease Mucolipidosis Type IV (ML4), despite their having both undergone genetic testing before starting a family.

When they learned that their genetic test had screened for less than half the conditions common in people of Jewish descent, the Golds made it their mission to spread the word about expanded Jewish genetic disease screening. They launched the Atlanta Jewish Gene Screen, an organization that partnered with the Victor Center for Prevention of Jewish Genetic Diseases at Einstein Medical Center in Philadelphia, and Emory Genetics from 2010 to 2012.

“Screening for Jewish genetic diseases is an issue that is as much a Jewish communal issue as it is a public health issue, and in order to create a standard, one has to understand both parts of the equation,” Randy Gold told JNS.org in late 2011, when he was named the Jewish Federations of North America’s “Jewish Community Hero,” earning a $25,000 grant.

“We as a Jewish community focused very, very clearly in the 1970s on Tay-Sachs screening, and today many people know to be screened for Tay-Sachs. But sadly, the conversation never evolved, to ‘now it’s Tay-Sachs and a second disease,’ or a third disease or a fourth disease, and the laboratory companies never created a standard for the panel of diseases that Jews should be screened for,” Gold said. “We are promoting awareness in the Jewish community and creating that standard for doctors and laboratories across the country to follow in screening for all 19 known preventable Jewish genetic diseases. There should never be another couple who gives birth to a child affected by a Jewish genetic disease because the parents didn’t get screened for all 19 known preventable Jewish genetic diseases.”

Through JScreen, the Golds are hoping to standardize genetic screening, make it more accessible, and lower its cost. For individuals with health insurance, the cost of JScreen should not exceed $99, and is often much lower, depending on one’s provider. For those without insurance, the self-pay rate for the program is $599, with options for financial assistance to those who cannot otherwise afford it.

The main priority of JScreen’s work is to reassure couples that their future children are not susceptible to an increased risk of acquiring any of the devastating diseases associated with Jewish genetics.

“When we do find a carrier couple, we offer a variety of options to help them have healthy children. Without screening, the couples would not have known they were at risk,” said Karen Arnovitz Grinzaid, JScreen’s program senior director at the Emory School of Medicine’s Department of Human Genetics, in a statement.

JScreen specialists counsel carrier couples on potential options that include in vitro fertilization (IVF), donated sperm or egg, and adoption. Each case can be matched up with a personalized consultation. It was such individualized counseling that allowed the Golds to later have a healthy baby girl through IVF.