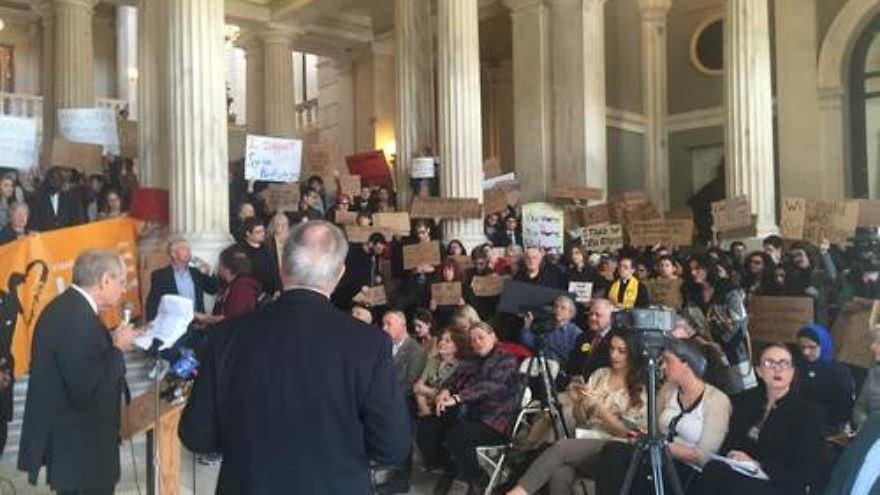 “We are proud that America is a country of immigrants. We welcome people who come here to join us and bolster our way of life. We do see and we do sympathize with people fleeing war and violence. But an influx of Syrian refugees may pose a significant danger to Rhode Islanders, and especially to the Jewish and certain other communities, specifically gays and women, that exist in Rhode Island,” Jacobs, president of the Americans for Peace and Tolerance (APT) advocacy group, which is based in nearby Boston, said in a speech whose text was obtained in advance by JNS.org.

Jacobs, who was accompanied by former U.S. House of Representatives member Pete Hoekstra (R-Mich.) at the press conference in Providence, R.I., said he was unable to complete his entire planned speech because he was shouted down by a group of about 100 protesters.

In the aftermath of Islamist terror attacks that killed about 130 people in Paris last November, more than half of America’s state governors publicly stated that they did not support letting in refugees fleeing Syria’s civil war. But when asked by the Associated Presswhat her state would do if the federal government asked Rhode Island to house refugees, Raimondo (a Democrat) said, “Of course we will.”

On Monday, APT’s Jacobs said that amid the national debate on Syrian refugees, “no one has raised…the very serious question of the deeply ingrained hatred of the West and our way of life that is embedded in Syrian cultural values.”

“Then too, over and beyond the threat to all Americans, this migration represents a unique and specific threat to the Jewish community posed by a near genocidal hatred of Jews that is inculcated in all Syrians,” he said. “This animus is taught through Syrian educational intuitions, starting from childhood, and finds continual expression in the broader Syrian culture. Sadly, even Jewish community leaders have failed to take note of this danger. I am here to break this dangerous, politically correct silence.”

While a number of American-Jewish organizations have advocated for the absorption of Syrian refugees, likening the Syrians’ plight to that of European Jews in the Holocaust era, groups like APT oppose letting in the refugees due to concerns over terrorism and Syria’s anti-Semitic culture. Presidential candidate Sen. Ted Cruz (R-Texas) and former presidential candidate Jeb Bush, meanwhile, have called for the U.S. to give priority to Syrian Christian refugees over Syrian Muslims, reasoning that Syrian Christians do not pose a domestic terrorism risk for America.

Jacobs explained that studies of Syrian school curricula “show that practically every Syrian will have been taught to hate the West and the Jews. This is the sad consequence of growing up under a Ba’athist regime—a violent authoritarian movement with its roots in 1930s European fascism.”

Those studies, according to Jacobs, include: “The schools of Ba’athism: A study of Syrian schoolbooks,” by Meyrav Wurmser via the Middle East Media Research Institute; “Islam in Syrian textbooks: monolithic and nonpluralistic,” by Muhammad Faour via the Carnegie Endowment for International Peace; and “Jews, Zionism and Israel in Syrian school textbooks,” by Dr. Arnon Groiss via the Center for Monitoring the Impact of Peace, among others.

“The Center for Monitoring the Impact of Peace published a report [by Groiss] in 2001 that revealed Syrian school textbooks teach that Jews ‘are portrayed as enemies of Islam since its inception, enemies of all mankind, and enemies of God himself.’ Syrian textbooks teach that, ‘The Holocaust is justified, though its magnitude is exaggerated by the Jews,’” Jacobs noted.

He added a description of the “famous case of [Syrian] defense minister Gen. Mustafa Tlass, who wrote a book titled ‘The Matzah of Zion’ in the 1980s that claims that Jews living in Damascus in 1840 killed two Christians and used their blood in preparing the unleavened bread called matzah. In consequence, since the Jewish religion is one of ‘vicious deviations’ and ‘black hatred against all human kind and religions,’ no Arab country should ever sign a peace treaty with Israel.”

Addressing Gov. Raimondo, Jacobs asked, “Do you really want to welcome hundreds or thousands of people who think that their religious duty is to make jihad, who think that Jews are the sons of monkeys and pigs, or Nazis, and who are believed to kill gentile children to make matzah? We need to heed the lessons of Europe. We are inviting in people from a radicalized culture that rejects tolerance and teaches hatred of women, gays, Christians, Jews, and democracy. Jewish leaders in Europe have spoken about the growing violence against the Jewish community emanating strongly from Muslim immigrants. Sexual assaults and violent anti-Semitism now affect much of western Europe. Before we can admit hundreds of similar refugees, who come from the same deeply disturbing culture, surely we must first gauge the threat they pose and examine the ideas they support.”