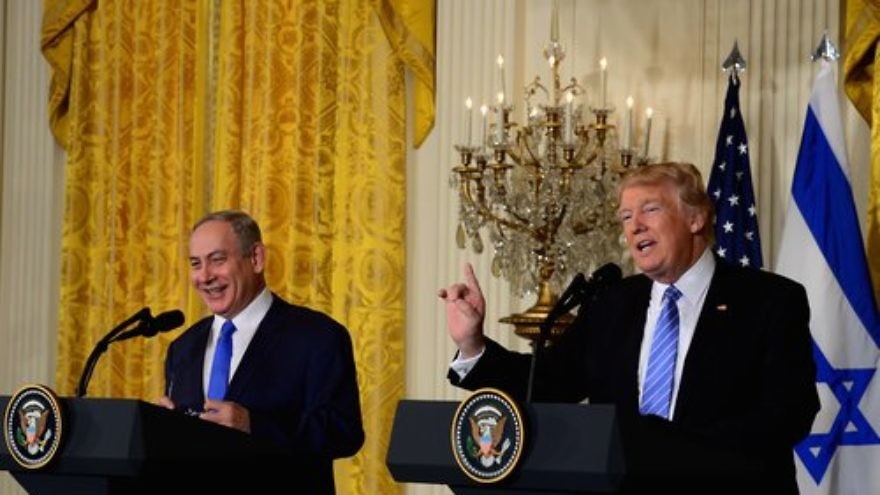 At his press conference with Israeli Prime Minister Benjamin Netanyahu Feb. 15, Trump said “the Palestinians have to get rid of” the anti-Israel and anti-Jewish material that appears in PA school texts. “They’re taught tremendous hate,” he said. “I’ve seen what they’re taught…it starts at a very young age and it starts in the school room.”

Malcolm Hoenlein, executive vice chairman and CEO of the Conference of Presidents of Major American Jewish Organizations, told JNS.org, “The U.S. government should use all leverage at its disposal to do something about changing the Palestinian school books, especially when the U.S. provides the Palestinians with over $350 million in aid each year. It’s an outrage that the incitement continues.”

Speaking from Morocco, where he received an award for fostering friendly relations between American Jewry and the Moroccan people, Hoenlein emphasized that “ending the incitement should not be a result of negotiations, but rather must be a prelude to negotiations.”

The Anti-Defamation League (ADL) and the American Israel Public Affairs Committee (AIPAC) also applauded the president’s statement. ADL National Director and CEO Jonathan Greenblatt said the Palestinians “need to reform their school curricula to remove the anti-Israel content.” In addition, Greenblatt pointed out, “some Palestinian textbooks contain anti-Semitism, incitement against Jews and stereotypes about Jews, and this content needs to be reformed as well. These kinds of actions certainly do not suggest that the Palestinians are preparing to make peace.” Greenblatt told JNS.org that “it is most important for the U.S. government to raise this issue in all meetings with the Palestinians.”

AIPAC spokesman Marshall Wittman said, “We are pleased the President has publicly called attention to this ongoing problem…We believe the Palestinian Authority should take firm action to halt any incitement to violence. Incitement of terrorism has posed a serious impediment to peace.”

“The president is to be praised for speaking out so forcefully against the continuing drumbeat of hatred toward Israel which emanates from the Palestinian Authority,” Rabbi Joel Meyers, executive vice president emeritus of Conservative Judaism’s Rabbinical Assembly, told JNS.org.

“I am glad President Trump believes it is time for us to become more forceful in our efforts to force change,” he added. “The road to peace cannot be achieved by teaching hate to generation after generation in school curriculum or by publicly praising killers of Israelis.”

Farley Weiss, president of the National Council of Young Israel, said Trump’s remarks were “a big step in the right direction” and “a welcome reversal of the previous administration’s policy.” Roger Jacobs, vice president of the New Jersey State Association of Jewish Federations, agreed that Trump’s comments about Palestinian schools were “very constructive.” Jacobs, whose cousin, Boaz Aluf, was killed in a Palestinian bus bombing in Jerusalem in 2002, told JNS.org that “there is no question that constant incitement does encourage people to commit violent acts.”

Then-Secretary of State John Kerry said in 2014 that the attack on a synagogue in Jerusalem’s Har Nof neighborhood was “a pure result of incitement” by Palestinian leaders. The terrorists killed an Israeli police officer and five rabbis, four of them American citizens. The Obama administration also criticized the PA’s incitement on several other occasions, but did not take any publicly known steps to curb it.

The key issue now is enforcement, according to Rabbi Dr. Irving (Yitz) Greenberg, who chaired the U.S. Holocaust Memorial Council from 2000-2002. He noted that “the U.S. in the past verbally urged the P.A. to stop incitement, but there was no enforcement.” Greenberg said “if this was enforced, it would push the Palestinians to shift from the victimhood mode and start acting like a peace partner. This would be good for them and could begin to rebuild some trust on Israel’s side.”

Rabbi Abraham Cooper, associate dean of the Simon Wiesenthal Center, told JNS.org it was “extremely important that President Trump’s immediate reaction was to recognize the problem for what it is.” Cooper said, “If you inculcate children with hate, you will lose another generation—if you don’t get rid of the mindset of glorifying terrorism and using anti-Semitism and denying Jewish history in the Holy Land, there is zero chance for peace.”

Roz Rothstein, CEO of the pro-Israel education organization StandWithUs, told JNS.org that the problem of incitement did not begin with the creation of the PA in 1994, but rather has been “an ongoing problem since before Israel became a state in 1948.” She said that “a just and lasting peace between Israelis and Palestinians will be impossible” unless the U.S. “takes steps to hold Palestinian leaders accountable on this issue.”

One unresolved question is what mechanism could be used to verify claims by the PA that it has revised the books. Sarah Stern, president of the Endowment for Middle East Truth (EMET), a pro-Israel think tank and policy center, pointed out that the Trilateral Committee to Monitor Incitement, which was established following the Oslo Accords, “turned out to be a miserable failure, because you can’t have the PA involved in the monitoring, when it’s the PA that is the problem.” She urged the Trump administration to establish a U.S. commission to determine if the PA has changed the school books.

“A respected figure with substantial knowledge of the Middle East, such as [former U.S. Ambassador to the United Nations] John Bolton, should chair the commission,” Stern said.

Conference of Presidents leader Hoenlein called the commission proposal “a valid idea.” He suggested that members of Congress and officials of the Department of Education be included in such a commission, “so they can reach hard conclusions about what is happening and whether they have changed the textbooks.” The Rabbinical Assembly’s Meyers agreed that “a monitoring committee to review the school curriculum could be a help in this direction.”