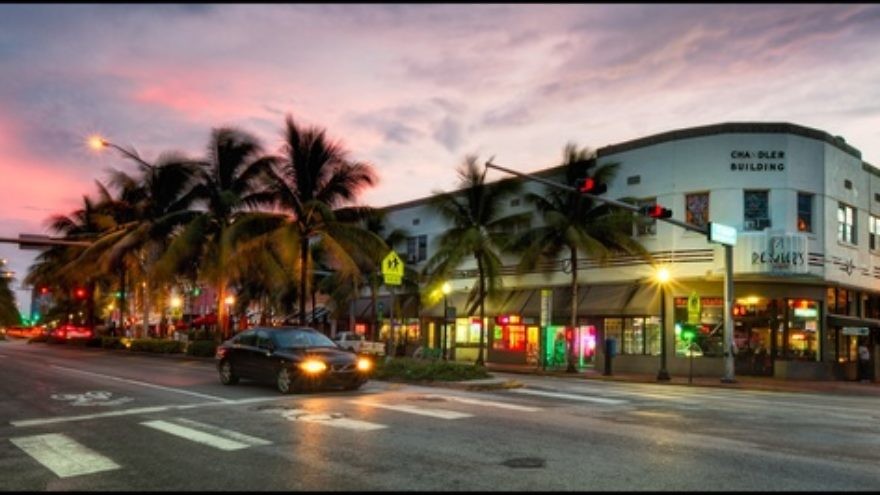 A view of Washington Avenue and 15th Street in South Beach, Miami. Rather than the partying/nightlife destination it is known as today, South Beach used to be a prime spot for Jewish seniors. Credit: Pedro Szekely via Wikimedia Commons.
Republish this article
1087 WORDS
Spread the word.
Help JNS grow!
Share now:

Is the age-old trend of Jews retiring to South Florida on the decline? It depends how you look at the numbers, according to demographer Dr. Ira Sheskin.

“Even though the percentage coming to Florida may be down, the number coming is probably not decreasing and it’s not going to decrease,” Sheskin, a member of the committee that completed both the 1990 and 2000-01 National Jewish Population Surveys, told JNS.org.

Why is that the case?

“Starting last year the baby boomers began to retire,” said Sheskin, director of the Jewish Demography Project of the Sue and Leonard Miller Center for Contemporary Judaic Studies at the University of Miami. “There are 10,000 baby boomers a day in this country turning age 65. Even though the percentage coming to Florida may be somewhat lower, because there is an increase now of people retiring in this country over the next couple of decades, the number coming to Florida will still continue to increase.”

Sheskin has completed in excess of 110 demographic studies for more than 80 synagogues, Jewish organizations, and commercial entities. He said that according to the nationwide trend in elderly retirement, “Florida is still, to this day, the overwhelming destination for retirees.

“Having said that, it is somewhat of a lower percentage than it was 20 or 30 years ago,” Sheskin said. “We now see retirees, including Jewish retirees, going to places like North Carolina, even places like Arkansas, where the cost of living is considerably less expensive. So the percentage [retiring to Florida] is down some.”

Sheskin estimates that there are 555,000 total Jews living in that three-county area—half of them 65 and over.

“Jews are continuing to come here, but they are more frequently settling in Palm Beach County than in Broward County, and probably more frequently in Broward than in Miami-Dade County,” Sheskin said. “Miami has become this major metropolitan area.”

According to Marcia Jo Zerivitz, founding executive director of the Jewish Museum of Florida, two groups of Jews started the trend of coming to Miami Beach.

“Prosperous Jews began to winter on Miami Beach in the 1950s when the new hotels (such as the Eden Roc and Fontainebleau) had the ‘American Plan,’” she told JNS.org. “The poorer Jewish elderly on South Beach, which were largely teachers and garment workers, rapidly declined from 1977 to 1986. South Beach was the last leg of a historic migration from the old world—the shtetls of eastern Europe, the Czarist pogroms and Nazi Holocaust—to this country, to the formidable years in the northeast, and at last, to the summer-in-winter climate.”

Zerivitz said that Miami’s South Beach, rather than the partying/nightlife destination it is known as today, used to be a prime spot for Jewish seniors.

“Today’s Jewish population on [South] Beach is Americanized and the non-Jewish population is largely Hispanic,” Zerevitz said. “It is a different world. For every 20-year-old today who cruises Ocean Drive, imagine an 80-year-old then pulling a shopping cart up Washington Avenue. Where the bars are today, imagine a makeshift synagogue. On the beach, for every ‘hard’ body today, imagine an elderly person, and no traffic. The last elderly Jews of Miami Beach represented tenacity and conviction, a love of learning, and a fragile and unique culture.”

“I remember going to South Beach when my wife and I moved to Florida in the early 1980s,” he said. “I took my guitar and I sang Jewish songs sitting on a bench, and I immediately had about 200 elderly Jews standing around listening and singing along. At one time, there were as many as 70,000 Jews on Miami Beach.”

The demographer’s latest estimate for Jews in Miami Beach is 19,000.

“That is still a reasonably sized Jewish population for what is a four-zip code area, but the nature of South Beach has changed significantly,” Sheskin said.

Nevertheless, Sheskin’s figures show that many so-called “snowbirds”—seniors who travel to Florida seasonally, for a warmer winter—turn into full-year residents. He said this trend could be traced to World War II, when many New York Jews who were in the army were trained in South Florida.

“They came here, saw something they liked, and then after the war when they started their families, decided to move their families here,” Sheskin explained. “That led to a large growth of the Jewish community in this area. The other obvious reason is the climate. As people aged, they could not put up with weather conditions, snow, and ice in the northeast. Florida became a good alternative.”

Further contributing to this trend is what geographers call “chain migration.”

“In the 1920s and 1930s, Jews started to come [to South Florida],” Sheskin said. “Others would come down on vacation or visit relatives then return to New York, Boston or Philadelphia and think, ‘Wow, that’s a neat place, I’ve already got relatives or friends there, and they would follow. It’s called chain migration because you have an initial group of settlers, you then have another group that comes and sees, goes home, and then follows, with the first group providing guidance to the second group as to where to live. Information then flows between South Florida and New York that leads to the continuation of that chain migration. “

According to Gary Monroe, who had a photographic exhibit called “Barely a Minyan” on the last Jews of South Beach, those Jews lived in accord with their old-world values.

“The ocean was therapeutic,” Monroe said. “The streets were lively with activity.  Everything was in walking distance. Social agencies and neighbors met their needs. For Shabbat, card rooms were converted to shuls.”

Zerivitz said the ethnic community of South Beach became out of touch, and eventually, out of time.

“Crime soared with the 1980 Mariel boat lift and sunrise swims came to an abrupt end,” she said. “Then came the popular TV show, ‘Miami Vice.’ The preservation movement that propelled the restoration of the [Art] Deco buildings also propelled the movement out of the elderly. In a rush to redevelop the southern shore, Holocaust survivors were told that they would be ‘relocated.’ The precious legacy of the culture they had established in South Beach came to the end of the line. The average age of ‘trendy’ South Beach’s population dropped by about 50 years within a decade.”