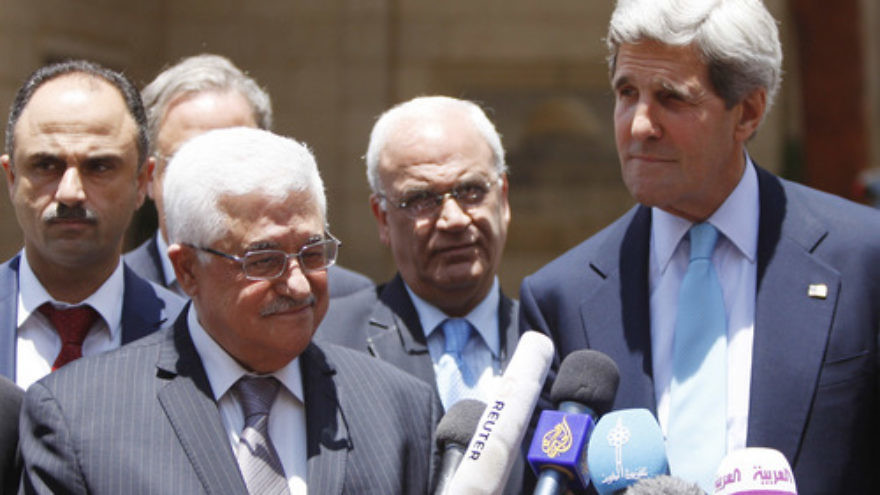 With his attention focused on a situation that is stable, relative to its immediate surroundings, U.S. Secretary of State John Kerry has left many in Israel wondering if the U.S. has its foreign policy priorities straight—particularly in the Middle East.

Kerry has visited Israel and the Palestinian territories five times since he started his new post in February (with the sixth, scheduled for July 11, expected to be canceled because of his wife’s health) in an effort to restart peace negotiations.

The recent push comes at a time of tremendous regional instability, with the ongoing civil war in Syria, anti-Islamist protests in Turkey, and a new president in Iran, as well as deadly rioting in Egypt following the deposing of Egyptian President Mohamed Morsi—a member of the Muslim Brotherhood.

“The fact that the administration, represented by the Secretary of State, has chosen to be preoccupied with the Palestinian issue proves that they have ignored a fundamental principle. If you are smothered by lethal sandstorms, don’t be preoccupied with the tumbleweeds,” Amb. Yoram Ettinger, former Minister of Congressional Affairs in Israel’s Embassy to the U.S., told JNS.org.

“I don’t think this initiative will yield any positive results,” Ettinger said.

According to Ettinger, the latest peace push demonstrates that Kerry mistakenly assumes that the Palestinian issue is a core cause of Middle East turbulence.

“The recent developments on the Arab Street are totally independent of the Palestinian issue, which has never been a Middle East pace-setter,” Ettinger said.

“Being preoccupied with the Palestinian issue diverts valuable resources and attention away from much more critical threats to vital American economic and defense interests,” he said.

A new study by the Israel Democracy Institute and Tel Aviv University indicates that Ettinger’s voice is not alone.

According to the poll, 71 percent of Jewish Israelis and 72 percent of Arab Israelis believe that Kerry’s initiative has a low chance of succeeding in restarting negotiations.

“Since 1949 there have been a litany of American initiatives and none of them have produced peace,” Ettinger said. “All of them have radicalized Arab expectations, and increased terrorism, because every time the U.S. proposes something, the Arabs have to outflank them from the hawkish side, because the Arabs cannot be seen as less hawkish than the Americans.”

“We are talking about a very negative impact on the peace process, not a positive one,” he said.

According to a report in London’s Al-Hayat newspaper, renewed negotiations would be given a six-to-nine month window to produce results. As part of the call to negotiations, Israel would be required to release Arab prisoners jailed prior to the 1993 Oslo Accords and to freeze all construction in West Bank Jewish communities outside of the major blocs.

Further, Israel would be required to allow Palestinians to build in Area C, land designated as part of the 1993 Oslo agreement as being under full Israeli military and civilian control.

Kerry is simultaneously calling for $4 billion worth of investments in the Palestinian Authority.

Ettinger contends that Kerry’s renewed peace push misleads the public by insinuating that Israeli concessions and foreign investment can deliver peace, which numerous initiatives have demonstrated is not the case.

Furthermore, according to Ettinger, the push for a Palestinian state runs directly counter to American and Israeli interests.

“A Palestinian State would provide a tailwind to Islamic terrorism, as evidenced by the terror-driven hate-education instituted by Mahmoud Abbas and by the PLO, which has been the role model of international terrorism,” he said.

Israel, in sharp contrast to the Palestinian Authority and other countries in the Middle East, “increasingly shines as the only stable, credible, capable, democratic and unconditional ally of the US in the Middle East and beyond,” according to Ettinger.

“U.S.-Israel relations have not evolved around the Palestinian issue, but around shared values (dating back to the 17th century), mutual threats and joint commercial, defense and homeland security interests,” he said.

As the fall of previously stable dictators in the Middle East, such as President Hosni Mubarak in Egypt, has demonstrated, the stability of peace agreements cannot necessarily be guaranteed long-term.

Palestinian Authority Chairman Mahmoud Abbas is 78 years old, suffers from low popularity and factional infighting, and has been ruling without a mandate since Palestinian Authority elections were indefinitely postponed in 2009—due to fears that the U.S.-designated terrorist organization Hamas would take over.

An agreement signed with Abbas—who could be assassinated for signing any agreement with Israel—may quickly breakdown.

“As for Kerry’s initiative, and Israel’s willingness to cautiously engage in a renewed process, you have to ask policymakers why they take erroneous steps,” Ettinger said.  “This initiative runs contrary to the interests of the U.S., the peace process, and U.S.-Israel relations.”