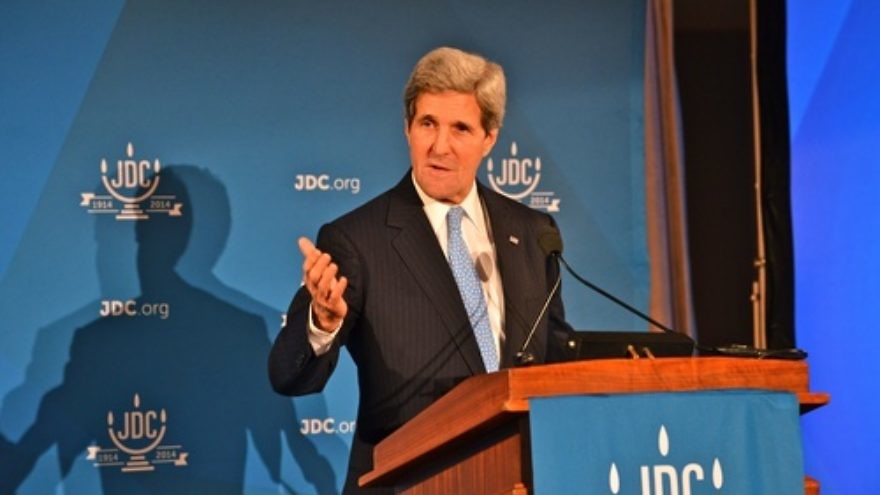 (December 12, 2013 / JNS) WASHINGTON—On John Kerry’s first visit to Israel in 1986, he toured a bomb shelter in Kiryat Shemona, inserted a prayer into the cracks of the Western Wall, and tried swimming in the Dead Sea.

But for Kerry, the most stirring memory of that trip was when the young senator from Massachusetts and his Israeli tour guide stood at the edge of a cliff at Masada, shouting “Am Yisrael Chai” across the chasm—and the echo faintly came back moments later.

“It was stunning to hear that echo,” Kerry recalled Dec. 9 at a dinner marking the 100th anniversary of the American Jewish Joint Distribution Committee (JDC). “You sort of felt like you were listening to the souls of the past tell you Israel is going to survive. And that’s why, my friends, you have a secretary of state who gets it, who understands this mission. And with your help and your support, we’ll get it done the right way.”

It wasn’t the first time Kerry has told his Masada story, but even so, it elicited an enthusiastic round of applause from the 300 or so dignitaries, diplomats, lawmakers, and other guests at the dinner—the first of several events this week celebrating the JDC’s centennial. The following evening, some 150 guests, including a dozen U.S. senators and representatives, attended a JDC congressional reception on Capitol Hill emceed by Irene Kaplan, chair of the organization’s government affairs committee.

At the Dec. 9 dinner, Kerry was introduced by Stuart Eizenstat, chairman of the newly formed JDC National Advisory Council and deputy secretary of treasury from 1999 to 2001.

“It’s fitting that we open the year-long centennial celebration of the JDC—the world’s leading Jewish humanitarian assistance organization—by having John Kerry speak to us in our nation’s capital,” said Eizenstat, whose late wife Fran served on the JDC board for 12 years. “It’s a perfect convergence of a genuine American hero who has contributed so much to our nation to the Jewish people and to Israel.”

The JDC, which has helped people in 70 countries—from victims of Haiti’s 2010 earthquake, to survivors of last month’s typhoon in the Philippines—is now working with the State Department to launch a partnership with the U.S. Agency for International Development for disaster relief programs in East Asia and the Pacific.

“You have provided relief to millions of people from every corner of the globe — all of whom are in desperate need of a helping hand,” said Kerry. “You also support Jewish life around the world, and you’re involved in ways that connect young Jewish men and women to their communities and inspire them to address social challenges.”

Kerry reserved his toughest remarks of the evening for the issue of Israel’s security—particularly as it relates to the Iranian nuclear program.

“The United States has long viewed Israel’s security as fundamental to our own,” Kerry said. “We stand squarely beside our Israeli friends and allies, and that bond is ironclad and will never be broken. Every time I land at Ben-Gurion Airport, I truly feel in my gut how precious and how vulnerable and how real Israel’s security challenge is.”

This is why, said Kerry, the Obama administration is “deeply committed” to a diplomatic solution to the Iran issue.

“We will not allow Iran to acquire a nuclear weapon—not now, not ever,” he stressed. “I know that some people are apprehensive and wonder that we somehow stumbled into something, and that Iran has pulled the wool over our eyes. Let me just say to you very simply: I’ve spent 30 years in the Senate, I’ve chaired the Senate Foreign Relations Committee, I understand military and security issues, and I understand the fundamental basis of what is necessary to prove Iran has a peaceful nuclear program. I can’t stand here today and say that the Iranians will do what they say they’re going to do, but I can say that Israel is safer today than it was the day before yesterday.”

The interim deal on Iran’s nuclear program ordered the Islamic Republic to dilute its 20-percent-enriched (high grade) uranium stockpiles to 5 percent, while allowing Iran to continue production of 3.5-percent enriched uranium while the agreement is in force. The U.S. has said Iran will receive about $7 billion in sanctions relief, but a Dec. 11 report in Haaretz cited security sources in Israel who said the relief could amount to $20 billion. Kerry told the JDC audience that the Iranians are “not allowed to install any new centrifuges, they have to allow us daily inspections at Fordow and Natanz, there will be regular inspections of their heavy water reactor, they can’t test additional fuels, and we’re allowed to go into the storage sites of all their centrifuge production facilities—all things we couldn’t do before we made this agreement.”

What happens if Washington isn’t successful?

“If we get to the end of these six months and they don’t do what they need to do—then we will have kept united the P5+1 and we will shown the global community our bona fides,” Kerry said. “We will go back to Congress and ratchet them up, and if need be, we will take no other options, military or otherwise, off the table.”

Reports indicate that Congress is close to passing a new bipartisan sanctions bill. The bill would give the Obama administration flexibility by not imposing the sanctions for six months, the length of the interim Iran nuclear deal. But Iranian Foreign Minister Mohammad Javad Zarif told Time magazine that the “entire deal is dead” if Congress passes new sanctions.

“We’ll do sanctions tied to the end game where the relief will only come if they stop the enrichment program, dismantle the reactor, and turn over the enriched uranium,” U.S. Sen. Lindsey Graham (R-SC) told CNN. Prime Minister Benjamin Netanyahu and other Israeli leaders, like advocates for new sanctions in Congress, believe a final deal with Iran should halt all enrichment.

“Why does the administration strongly oppose congressional action on Iran sanctions legislation that makes clear new sanctions will not be imposed unless Iran violated the terms of the interim deal?” U.S. Rep. Eliot Engel (D-NY) asked Tuesday when Kerry testified before the House Foreign Affairs Committee.