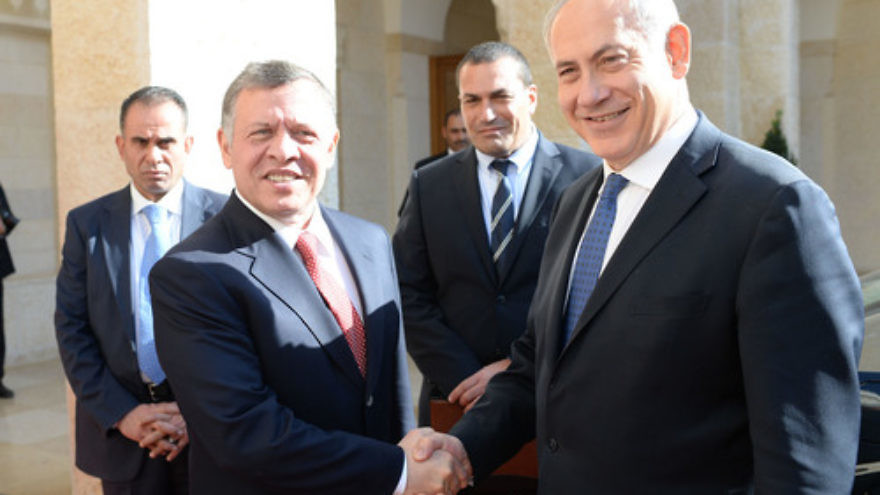 A recent border incident in which Israeli troops shot a Palestinian-Jordanian judge has highlighted the dualities of Israel’s stable-yet-tenuous relations with its eastern neighbor.

Judge Raed Za’eiter was shot dead on March 10 at the Allenby Bridge crossing, also known as the King Hussein Bridge, after he allegedly charged Israel Defense Forces soldiers while shouting “Allahu Akhbar” and attempted to grab a rifle from a soldier.

While Jordan’s monarchy has maintained strong ties with Israel’s government since the signing of a peace agreement with Israel in 1994, Jordanian parliamentary lawmakers are now calling for the severing of diplomatic ties and the recalling of ambassadors to Israel in the wake of the incident.

“In regard to Israeli-Jordanian relations, there is a clear distinction between the monarchy and its mechanisms on one side, and the relationship between the people [of the two countries],” said Dr. Mordechai Kedar, director of the Center for the Study of the Middle East and Islam at Israel’s Bar-Ilan University.

“So when Israel shoots a respected judge, all the anti-Israel sentiments are coming out from under the rug, and everybody attacks the king for collaborating with Israel,” Kedar told JNS.org.

Jordanian King Abdullah II must now try to weather the storm, recognizing that most of the Arab world, including his own citizenry, has strong disdain for Israel. Yet since Israel is a growing military and economic power in an otherwise unstable Middle East, there are many advantages for Abdullah to maintain close strategic ties with the Jewish state.

“For decades, the palace has recognized the import and utility of relations with Israel,” David Schenker, Aufzien fellow and director of the Program on Arab Politics at The Washington Institute for Near East Policy, told JNS.org. “Jordan was having relations all the way back to 1948, this is ongoing for decades. Yet on the Jordanian street, there is a broad sentiment that Israel is not good news.”

In the past year, Israel has signed two major strategic resource contracts with Jordanian counterparts, in addition to ongoing military cooperation and intelligence sharing between the nations. Israel and Jordan are collaborating on a Red Sea water desalination project that will bring water from a Jordanian plant to southern Israel, while Israel will send much-needed water to Jordan’s north. More recently, Jordanian industry has contracted newly exploitable Israeli natural gas.

Yet the recent border incident has brought about renewed calls from Jordan’s populace, and even from Jordan’s publicly elected legislature, to end all ties with the Jewish state.

Jordanian Prime Minister Abdullah Nsur refuted the most recent calls to cut ties with Jerusalem during a no-confidence motion, saying such moves do not “serve the path of our martyr’s case.” According to Jordan’s state-run Petra News Agency, Nsur said, “If we go ahead with such moves, Jordan will face repercussions that would go beyond our sorrows.” He added, “It will also affect Jordan’s abilities concerning the Israeli-Palestinian peace talks.”

Additionally, on March 30, an Israeli military court ordered the IDF’s police investigations unit to open a probe into the shooting of Za’eiter, Israel Hayom reported. The investigation will try to determine whether or not the IDF soldiers who were involved in the shooting acted appropriately, and if they will face criminal charges.

Bar-Ilan University’s Kedar explained, “On the one side, there is a very close cooperation, especially on security, when it comes to terrorism, borders, counter-insurgencies. We share many concerns, which target the Jordanian regime and Israel together. We are in the same bed when it comes to security, vis-à-vis threats to stability.”

Should Jordan’s monarchy eventually fall—as in “Arab Spring” events in Egypt and across the Middle East—the Palestinian majority could potentially rise to power in the country, realizing an alternative vision of Palestinian self-determination for statehood.

“The Jordanian regime suffers problems of legitimacy. I am not sure that Israel should be the party that resuscitates it,” Kedar said.

In addition to the fragility of a Hashemite monarch ruling a Palestinian majority, Jordan has custodianship over the Temple Mount in Jerusalem, Judaism’s holiest site and a major spiritual flashpoint in the region. Developments and unrest on the Temple Mount have often been a source of tension for Israel’s government.

Kedar said the Jordanian monarchy’s survival is partially dependent on close ties with Israel, one of the factors contributing to the Israeli-Jordanian peace agreement. “The regime in Jordan actually rests on the security relationship with Israel,” he said. “Their problem has been how to sell this agreement to the population.”

Jordan has deep economic problems because of refugees flooding the country from Syria and Iraq, Kedar noted. “Those refugees from Syria are not all innocent. Some are jihadists that come to recruit refugees to their ranks,” he said.

“The last thing that the king needs now is unrest—political unrest and security unrest. It is complicated. We shouldn’t envy them,” added Kedar.

The Washington Institute’s Schenker suggested Abdullah’s rule might have benefited in the short term as a result of chaos throughout the region. “Because of the destabilization of Syria, Jordan has become a little bit more stable,” he said. “When Jordanians look around, they see that what they have is better than what is happening in Syria and better than what is happening in Egypt.”

Yet tumult across the Middle East is not necessarily making Jordan’s public warm up to Israel, posing long-term threats to the Israel-Jordan relationship.

“In the short-term, we may see the ambassadors recalled, and then possibly restored to their posts soon after,” Schenker said. “As long as the system and the palace remain in place, the relationship is secure. But, in the long run, the relationship may be untenable.”