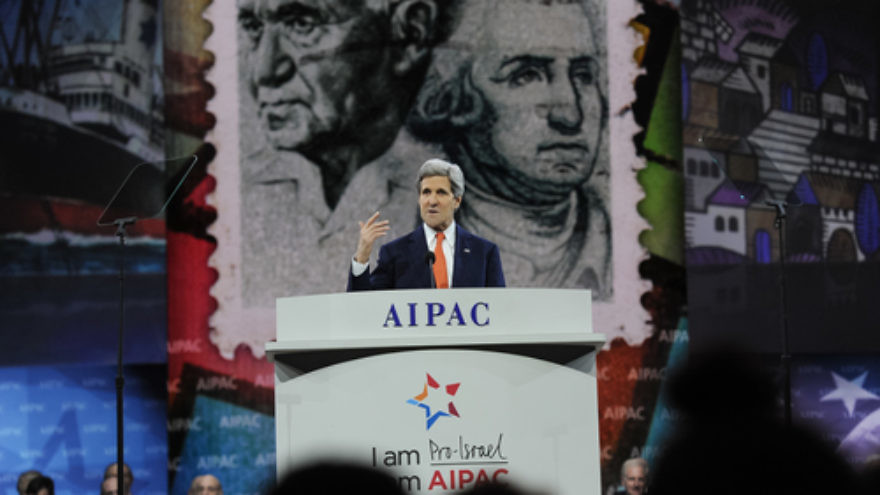 After he was apparently criticized by U.S. Sen. Chuck Schumer (D-NY) for comments he made last month on boycotts of Israel, Secretary of State John Kerry in his Monday address at the American Israel Public Affairs Committee conference sought to allay skepticism on nuclear negotiations with Iran and Israeli-Palestinian conflict negotiations.

Without mentioning Kerry by name, Schumer took a shot at the secretary of state by saying those with “even with the best of intentions” who warn Israel that it will face increased boycotts if it does not reach a peace agreement with the Palestinians “have it all wrong.”

“Those quote unquote friends [of Israel] should be condemning the boycotts in any possible way, weakening them,” Schumer said.

In February at the Munich Security Conference, Kerry said in connection with the outcome of the U.S.-brokered Israeli-Palestinian talks, “There are talks of boycotts [of Israel] and other kinds of things. Are we all going to be better with all of that?” President Barack Obama, asked by Bloomberg View columnist Jeffrey Goldberg if he agreed with Kerry’s assessment on boycotts, said in comments published Sunday that Kerry “has been simply stating what observers inside of Israel and outside of Israel recognize, which is that with each successive year, the window is closing for a peace deal that both the Israelis can accept and the Palestinians can accept.”

Obama also said, “If you see no peace deal and continued aggressive settlement construction—and we have seen more aggressive settlement construction over the last couple years than we’ve seen in a very long time… If Palestinians come to believe that the possibility of a contiguous sovereign Palestinian state is no longer within reach, then our ability to manage the international fallout [for Israel] is going to be limited.”

On Monday, Kerry told AIPAC, “I will continue to staunchly, loudly and unapologetically oppose boycotts of Israel. That will never change.”

Regarding the nuclear talks, Kerry said there is a “healthy debate” on the effectiveness of the negotiations and that “we welcome that.” He said American diplomacy with Iran “is guided by a simple bottom line: no deal is better than a bad deal.”

“The truth is, it is strong diplomacy that has actually made this moment [of getting Iran to negotiate] possible, and we need to give it the space to work,” Kerry said.

The interim nuclear deal with Iran, according to Kerry, has “not changed one piece of the sanctions architecture, and yet we are able to negotiate.”

“This is not a process that is about trusting Tehran,” he said. “This is about testing Tehran. And you can be sure that if Iran fails this test, American will not fail Israel. That I promise.”

A “good deal” with Iran would make certain that Iran could not obtain nuclear weapons, continually ensure that the Iranian nuclear program remains peaceful, and expand Iran’s “breakout” time for obtaining a nuclear weapon so that the world could act if Iran takes improper steps, Kerry explained.

Schumer—one of 26 senators to cosponsor the Nuclear Weapons Free Iran Act, which would levy additional sanctions on Iran should the Islamic Republic violate the terms of the six-month interim nuclear deal or fail to reach a final agreement—said America “must keep tough sanctions in place until Iran agrees to give up nuclear weapons.” The New York legislator criticized the terms of the interim deal, which gave Iran $7 billion in sanctions relief.

“It is no secret that I believe that we should not in the interim agreement have reduced sanctions in any way, until Iran reduced its nuclear capability,” Schumer said, adding that many in Congress “believe that any reduction in sanctions relieves the psychological power of future sanctions” on Iran.

Congress “will be heavily involved” in monitoring the impact the diminishing of sanctions has on Iran, and will ensure that any final agreement with Iran will permanently prevent the country from having nuclear weapons, said Schumer.

On the Israeli-Palestinian talks, Kerry said he knows “there are many doubters here” about the suitability of Palestinian Authority Mahmoud Abbas as a peace partner for Israel. Kerry, however, believes Abbas “has demonstrated he wants to be a partner for peace” and has “been genuinely committed against violence.”

Israeli Prime Minister Benjamin Netanyahu, meanwhile, has “demonstrated his courage and his commitment in pursuit of peace with security” and knows that a peace deal with the Palestinians is only way for Israel to remain a Jewish and democratic state, rather than a binational state, Kerry said.

Kerry vowed that any peace agreement would “guarantee Israel’s identity as a Jewish homeland,” and said that ending the Israeli-Palestinian conflict “means ending the [Palestinian] incitement.”

Israel’s security “is our first priority,” Kerry said, stressing that the Obama administration made an unprecedented move in the Israeli-Palestinian peace process by sending retired four-star general John Allen to the region “to work with Israelis and Jordanians and Palestinians to make the Jordan River border as strong as the strongest border on earth.”

“There is a vision of peace, and it takes tough choices on both sides,” Kerry said.