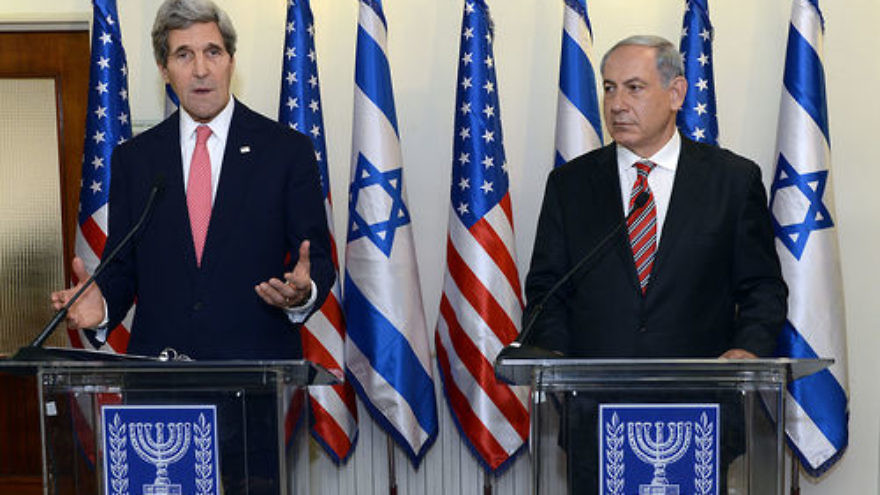 John Kerry has a new strategy for achieving Mideast peace: mobilize the international community to gang up on Israel.

That was the essence of the secretary of state’s disturbing remarks in Paris on March 13. Kerry declared that the Obama administration is “looking for a way forward” to bring about creation of a Palestinian state. He said that Palestinian statehood is “absolutely essential.”

Not just “an idea worth exploring”; not just “something to be considered.” Rather, “absolutely essential.” Kerry and President Obama have made up their minds and will not consider any alternatives. They have decided that establishing an independent Palestinian state is the only solution to the Arab-Israeli conflict. It’s just a question of how to make it happen.

The administration’s attempts to pressure Israel into creating a Palestinian state obviously have not been successful so far. So Kerry is looking for new ways to harangue the Israelis. Standing next to a group of European foreign ministers at the Paris press conference, Kerry said: “There’s not any one country or one person who can resolve this. This is going to require the global community, it will require international support.”

Significantly, Kerry’s quest for an international alliance to pressure Israel comes on the heels of France’s recent announcement that it will try to convene an international conference to resolve the Israeli-Palestinian conflict. The French said that if the conference failed to produce a Palestinian state, they will go ahead and unilaterally recognize such a state. That’s the French idea of “negotiations.”

The French approach, which Secretary Kerry now seems to be moving towards, is reminiscent of similar proposals that were made back in 1985. Alarmed, then-Defense Minister Yitzhak Rabin flew to Washington to try to head off the convening what was being called an “international umbrella” for Mideast negotiations.

“Whenever anyone mentions umbrella, it reminds me of Chamberlain and Munich,” Rabin declared. For Rabin to invoke the memory of Chamberlain selling out to Hitler at Munich–and for Rabin to use those words at a press conference in Washington–vividly illustrates how dangerous he considered the ‘international’ proposal to be.

It’s not hard to understand why Rabin in 1985 opposed such a proposal, and it’s not hard to see why Israel’s leaders today oppose it, too. If Kerry succeeds in his strategy, such an international conference or umbrella would consist of a dozen or more Arab and European countries ganging up on Israel and demanding that the Israelis make unilateral concessions to the Palestinians. Knowing the Obama administration’s pro-Palestinian slant, one must assume that the U.S. would side with the Arabs and Europeans.

The French–evidently with Kerry’s tacit approval, or perhaps even his encouragement–are pushing forward. French diplomat Pierre Vimont will be visiting Israel and the Palestinian Authority this week to promote France’s initiative. French Foreign Minister Jean-Marc Ayrault, appearing alongside Kerry at the press conference: “The conflict is getting worse and the status quo cannot continue.”

The conflict is getting worse? No, it’s not.

The status quo cannot continue? Yes, it can.

I am the last person in the world to minimize the reality of Palestinian terrorism. But there’s no way anybody can say the current attacks are worse than the weekly bus bombings of the 1990s. Israel’s strong military response put an end to the suicide bombings–which shows that if Israel does not fight with one hand tied behind its back, it can beat the terrorists.

And the status quo may not be the ideal solution, but show me a better one that’s feasible. Withdrawing to indefensible borders? Setting up an armed or soon-to-be-armed Palestinian state just a few miles from Jerusalem and Tel Aviv? In 1976, people were saying “the status quo cannot continue.” They were saying it 1986 and 1996 and 2006, too. Yet here we are, nearly 50 years after the 1967 war–and it has continued, because the alternatives have been worse.

Of course, what Kerry and French call the “status quo” is not at all the same as the status quo of the 1970s or 1980s. In 1995, Rabin withdrew from the areas where 98 percent of the Palestinians reside. For the past 21 years, the Palestinian Authority has functioned as a de-facto state in a large portion of Judea-Samaria. The only thing the PA lacks is a full-fledged army and the ability to import tanks and planes. And from Israel’s point of view, that’s not such a bad status quo.

So maybe it’s time for Kerry and his gang of would-be interveners to step back, take a deep breath, and face the fact that the slogans and ideas of the 1980s—”status quo,” “international umbrella,” and the like—are just not suited to today’s reality.