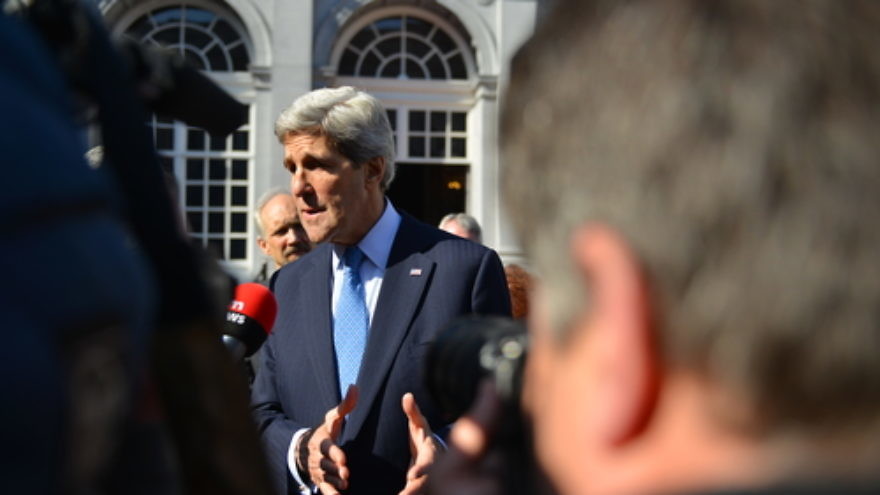 A private conversation caught on an open microphone between Secretary of State John Kerry and his aide July 20 is raising questions about whether the Obama administration’s uncompromising public support for Israel’s Operation Protective Edge may not reflect its private stance.

“Right,” the aide replied. “It’s escalating really significantly and just underscores the need for a cease-fire.”

“We’ve got to get over there,” Kerry told the aide, referring to the Middle East. (On July 21, Kerry flew to Cairo to begin working on a cease-fire agreement between Israel and Hamas.)

The conversation took place before Kerry appeared on Fox News Sunday. Host Chris Wallace played a clip of the conversation for the secretary and asked, “[W]hen you said it’s a ‘hell of a pinpoint operation,’ are you upset that the Israelis are going too far, and in fact, do you intend to go back to the Middle East tonight, sir?”

“It’s tough to have this kind of operation, and I reacted obviously in a way that anybody does with respect to young children and civilians,” Kerry answered. “But war is tough, and I said that publicly and I’ll say it again. We defend Israel’s right to do what it is doing in order to get at those tunnels.”

“Kerry has once again shown his true colors, lending the imprimatur of the U.S. secretary of state to the Palestinian propaganda line against Israel,” Pollak told JNS.org. “He also did his own diplomatic mission real damage by revealing to the Israelis his contempt for their legitimate security concerns.”

But Alan Elsner—vice president of communications for the self-labeled “pro-Israel, pro-peace” lobby J Street—thinks Kerry’s “pinpoint” remark has been assigned more significance than it deserves. He said Kerry was simply voicing a normal reaction to the thought of casualties.

“I didn’t hear anything particularly controversial. He was just expressing human emotions and expressing his desire to bring the bloodshed to an end,” Elsner said, adding that it is also important to distinguish between “civilian casualties that are caused when Hamas places its positions in extremely populated areas, and those which are caused by a clear case of error.”

Elliott Abrams, who served as a top national security adviser to President George W. Bush, was not as discouraged by Kerry’s description of Israel’s military operation as he was by the secretary of state’s inability to properly delegate within his department.

“I found it interesting that Kerry felt he just had to go out [to the Middle East]—for no real reason,” Abrams, a senior fellow for the Council on Foreign Relations, told JNS.org. “He has a deputy who used to be assistant secretary for that region and [an] ambassador to Jordan (Bill Burns), and it would have been wiser to send him.”

“U.S. diplomacy should not be a one-man band,” added Abrams. “Kerry seems compelled to appear, even when there isn’t much he can accomplish.”