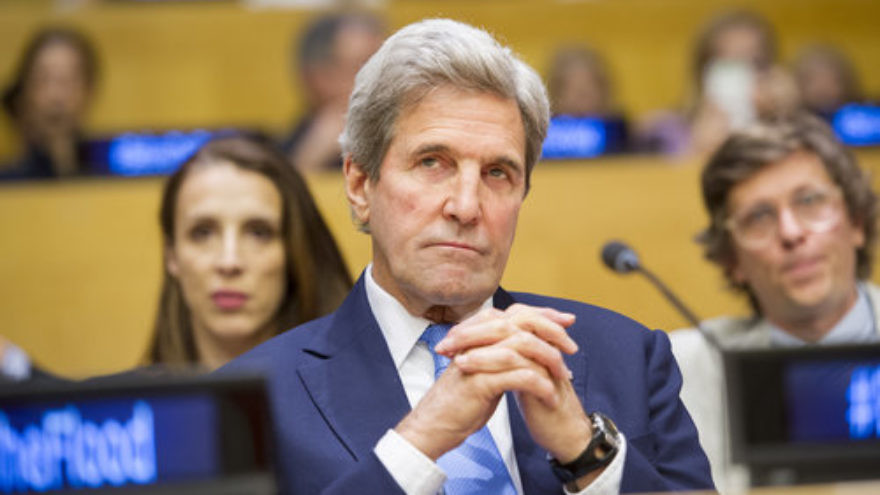 Like many others, I sat at my computer with baited breath Wednesday waiting for Secretary of State John Kerry to explain the background to the U.S. abstention on last week’s United Nations Security Council vote. And explain he did. But there were so many things wrong with what I will call Kerry’s farewell anti-Israel speech:

Spending 45 minutes on settlements, and 45 seconds on terrorism.

Condemning Israeli construction even within Jerusalem.

But if I had to choose the one aspect that bothered me the most, the part that made me want to shout at the computer screen, it would be the false moral equivalence.

Kerry, like all blame-Israel-firsters, cannot accept the simple fact that, in this conflict, the Israelis are the good guys and the Palestinians are the bad guys. That’s not to say that Israel is perfect; of course not. America was not perfect in the 1940s, either. But any reasonable person could understand that the U.S. and its allies were the good guys, and Nazi Germany and its partners were the bad guys.

Kerry and the rest of the Obama administration see the world differently. They will not acknowledge that Israel is the victim, and the Palestinians are the aggressors. They will not recognize the difference between democratic, freedom-loving Israel and the totalitarian, terror-promoting PA regime.

So in his speech Wednesday, Kerry recalled visiting Kiryat Shemonah, near Israel’s northern border, and he acknowledged that children there “have 15 seconds to reach bomb shelters.” But he couldn’t just leave it at that. He had to try to show that Palestinian children have similar experiences. So he quickly talked about visiting Gaza and seeing Arab children “in the rubble of bombed-out buildings.”

That kind of superficial equivalence is outrageous because it is so fundamentally wrong. The Israeli children are the innocent victims of Arab terrorists—and the Palestinian children are also the innocent victims of Arab terrorists. The only reason their buildings are in rubble is because their elected ruler, Hamas, deliberately provokes Israeli strikes by raining thousands of rockets down on Israeli cities.

He repeatedly claimed “both sides” were to blame. “Many people” on both sides, Kerry asserted, “don’t see the other side as people.”

Nonsense. Israeli schools teach coexistence, diversity and pluralism. It is the PA’s schools that portray Jews as less than human—as insects and wolves and demons.

Kerry then alleged that “both sides push a narrative to play on fears and stereotypes.”

Nonsense. It is the PA that peddles conspiracy theories about Jews plotting to destroy the mosques on the Temple Mount—theories that are deliberately intended to whip up fears and anti-Jewish stereotypes among Palestinians. And the incitement works. It manifests itself every single day, in the stabbings and stonings perpetrated by Arabs who claim they are “defending the Al-Aqsa mosque.”

The lowest point of Kerry’s moral-equivalence tirade was when he listed what he said are the two major obstacles to peace: “settlement expansion” and terrorism. That rubbery term “settlement expansion” is a nefarious-sounding description of such less-than-nefarious actions as a family building an extra room in its house for a nursery, or the construction of a kindergarten in the Jewish Quarter of Jerusalem’s Old City. To portray Israeli kindergarten construction as the equivalent of Palestinians blowing up buses, stabbing women and children, or lynching Israelis who accidentally drive into their neighborhood is nothing less than outrageous.