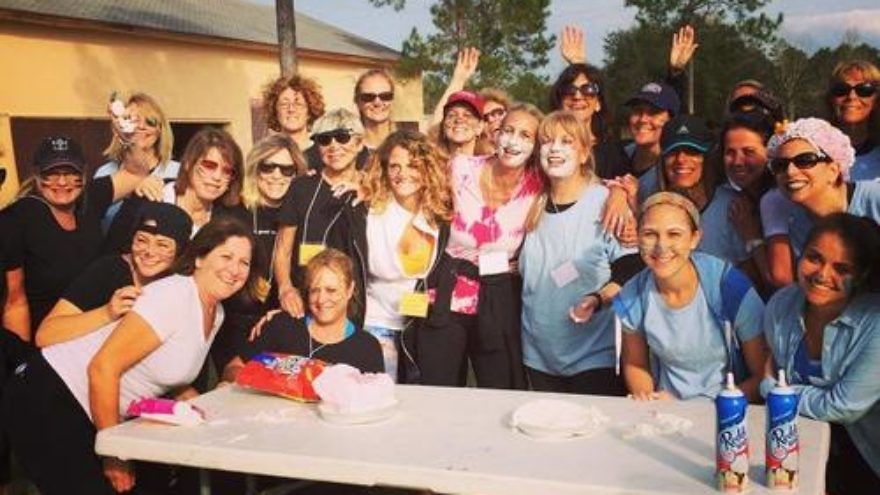 Scott Michaud is a hard-working lawyer 51 weeks out of the year. But for that final week, the 58-year-old is more at home on the trail than in a courtroom.

“It was my daughter’s idea,” says Michaud, who splits his time between homes in Colorado and Florida. “She told me, ‘Dad, you need to go to overnight camp.’” Since his children had been Ramah campers, the adult camp at Ramah of the Rockies outside Denver seemed like a good choice.

“There’s nothing like camping out in nature, to being physically a part of the environment, going to bed when the sun does and waking up when it wakes up,” he says, adding with a laugh, “I’m a lawyer, but these are billable hours for my life.”

With some 10 million kids packed off to overnight camp each summer, lugging duffels crammed with bug repellant, sunscreen, granola bars, baseball caps, and t-shirts, some anonymous genius must have taken one look at today’s tightly wound adults and prescribed a cure: that same brand of getaway filled with walks and whittling, singing, and s’mores.

Like his parents before him, Mike Sokol runs Camp Shalom of central Florida. Only these days, the camp is branching out. Like many other Jewish camps, in addition to the kids and the teens who are their bread and butter, Camp Shalom is also welcoming grown-ups around the campfire, albeit off-season when the kids aren’t there. Offering two adult camps a year, one for Florida’s Jewish men’s clubs and the other a woman’s group through Campowerment, Camp Shalom is a destination where adult campers tend to return year after year.

“At the men’s camp, they go into digital detox, unplugging, and sitting by the campfire like when they were kids,” says Sokol. “And the women who’ve been taking care of other people for years, when they come here they can be a kid themselves and just enjoy.”

In fact, giving women a break from what were often crushing responsibilities was the inspiration that Isabella Freedman brought to the founding of her Jewish retreat center at the turn of the 20th century. “She wanted to give factory workers a break from very difficult lives,” says Miki Raver, who runs the two-week senior camp at Hazon’s Isabella Freedman Jewish Retreat Center in Falls Village, Conn., each summer. (Hazon is a non-profit working within the Jewish community for a healthier and more sustainable world.)

Attracting as many as 100 men and women between ages 55 and 99, the camp features hikes, workshops, excursions, arts and crafts, tai chi, and this year even “Torah yoga” and memoir-writing coaching. “Between the power of being in nature and the bond that forms between the women, the camp is a transforming and life-renewing experience,” says Raver.

On the other end of the age spectrum are the 72 young adults who turn out each summer for the Marilyn and Sigi Ziering Brandeis Collegiate Institute (BCI) in California. “After 26 days, they leave feeling like they have a home in the Jewish community and hopefully the tools to make Jewish choices and feel like they matter as tomorrow’s Jewish leaders,” says Navah Kelman Becker, who directs the program.

For 75 years, BCI has been welcoming 18-26 year-olds from around the world each summer to the Brandeis-Bardin Campus’s 2,700 acres, the largest plot of Jewish-owned land outside of Israel. “We balance Jewish studies with the arts, the pool, hiking and overnight camping, all the things that make a camp a camp,” Becker says. Although participants hail from around the globe, Facebook, Skype, and texting keep them connected long after camp is over, adds Becker.

Claire Perelman, a 24-year-old from San Diego who attended the camp last summer, has already visited BCI friends in New York and has BCI friends coming out to see her soon. “You get really close to what’s become your family for the month, the experience is so real,” she says. “With the balance of work and play and the hour of beit midrash (Jewish study hall) daily with rabbinic students who made it very accessible, it was altogether a life-changing experience.”

As transformative as they are for the individual camper, adult camps are equally positive influences on the communities they serve. “We have seen that by hosting family camps or adult camps, Jewish camps can serve as an important and positive experience, and as a connection point to other Jewish engagement opportunities in the community,” says Jeremy Fingerman, CEO of the Foundation for Jewish Camp.

Indeed, whatever the age group targeted, adult Jewish camps work as outreach to the unaffiliated. Of the roughly 100,000 Jews in Texas, at least 40 percent are unconnected to the Jewish community, says Frank Silberlicht, director of Camp Young Judaea of Texas, located an hour outside Austin. He says his two adult camps each year represent “an easy way to get involved” in Jewish life. Men’s Camp (“sports and beer and brotherhood”) in September and Women’s ReJEWvenation (“spirituality, massages, and yoga”) in May “bring not only the adults, but eventually their kids and grandkids into our camp community,” adds Silberlicht. His newest idea: Bubbe and Zadie and Me Camp, debuting around Hanukkah time.

“We know people love the adult camps by the way they keep coming back every year and their donations to the camp,” Silberlicht says. “It’s win-win-win for the campers and their families, the Jewish community, and the camp.”

“We are so far off the beaten trail that it takes a while to reach us,” quips Rabbi Eliav Bock, executive director of Ramah in the Rockies. But that hasn’t stopped campers like Scott Michaud from trekking out there repeatedly—and, like Michaud, planning to return again.

Indeed, the mostly 55-and-older campers who come out for the weeklong experience at what is considered a rustic “outdoor adventure camp” spend much of their time sampling the joys of the natural world, without the buffer of many civilized conveniences.

This physical encounter with nature affects the campers spiritually as well, the rabbi says.

“Though they come with a wide range of Jewish backgrounds and though we’re so disassociated from the cycles of nature today, everyone is inspired by the fact that so many of our Jewish values emerge from our origins as an ancient people living in concert with the land,” says Bock.

The camp is also deeply personal, he adds.

“Camp can be an intense and transformative Jewish experience. With everything they’ve lived through, these adults are open to Torah learning to help them look at their own life and rise up to a higher level of spirituality,” Bock says.

Tammi Leader Fuller, who runs Campowerment for women at Florida’s Camp Shalom as well as camps near Los Angeles and in Pennsylvania’s Pocono Mountains, says that adult campers can “discover their purpose amid the joys, the fun and the games…life is so fast and busy today that we are glad there are almost no cell signals in our camps.”

“We know we need to disconnect to reconnect,” says Fuller, a longtime producer for “The Today Show” on NBC.

Although not all of her campers are Jewish, Fuller insists that every camp that hosts her Campowerment programs needs to be Jewish.

“To me, camp is Jewish,” she says. “It’s Jewish in that sense of community we need more and more of as we age, it’s Jewish in the mezuzahs on the cabin doors and singing ‘Hinei Matov’u Manayim’ around the fire, and it’s Jewish because a Jewish camp makes you feel cared for and safe and included in a community. It’s something grown-ups need as much or more than kids do.”