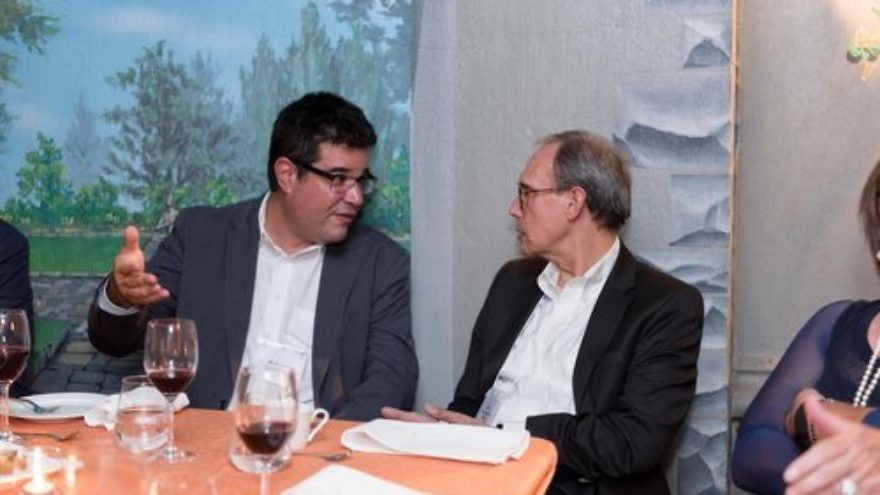 Their goal is to become familiar with North American Jewish life by meeting Jewish professional and community leaders.

“They came with a goal of learning about the (North American) Jewish community,” but “also really felt they were leaving with a deeper understanding of how our communities care, and the mutual benefit that comes out of the relationship,” Adam Minsky, president and CEO of the UJA Federation of Greater Toronto, told JNS.org.

Arriving in Toronto for the first stop, the politicians—traveling with Jewish Agency and Federation leaders—were welcomed with a walking tour of the city’s historic Jewish area. They met with rabbis, learned about Jewish education in the city, and met with federal and provincial parliament members. They also visited social service agencies to see how the community responds to problems, and they met with Israelis and Russian-speaking Jews. They also attended a presentation on the UJA Federation of Greater Toronto’s investment in Israel and other countries through the Jewish Agency.

“What was key for us was to go beyond the headlines to allow them to interact with members across organizational and denominational lines,” and to learn “what it means to live in a community where being Jewish is a choice,” Minsky said.

The Labor/Zionist Camp’s Shai told JNS.org that “every Jewish community has its characteristics,” and he is particularly impressed with the diaspora Jewish ability to maintain a community amidst a different world. Shai heads the Lobby for Strengthening the Jewish World in the Knesset.

It’s very important to reach “every Jewish person somewhere in the world,” and “continuously work on maintaining this connection,” he said.

Launched in 2013, the lobby now has 45 Knesset members who tackle the issue of unifying Jewish people around the world by participating in activities in Israel, and by traveling to diaspora communities to get an impression of Jewish life there.

Minsky called the engagement with the lawmakers “meaningful,” adding that increased unity between Jews in Israel and the diaspora could also lead to important legislative compromises in the Jewish state.

One current issue is an effort to reconcile between Israel’s Orthodox rabbinical establishment and other more liberal forms of Judaism that are currently not formally recognized in the Jewish state but are prevalent among North America Jews, who also consider Israel their spiritual home. This on-going conflict has manifested recently with the campaign of Women of the Wall, Reform Jewish women who’ve been calling for their right to pray at the Western wall.

“It is their complete right,” Shai said, though a compromise reached in January that planned for a separate egalitarian prayer space alongside the traditional Orthodox prayer area at the wall has recently stalled.

“Although for millennia, Judaism played a central role in forging and unifying our people, today American and Israeli Jews—who together constitute more than 85 percent of world Jewry—find themselves increasingly divided on religious matters,” chairman of the Jewish Agency Natan Sharansky wrote in Tablet Magazine on Sept. 6.

“While Israel’s official religious body refuses to recognize liberal Jewish practices, the state itself continues to insist that Israel should be a home for each and every Jew, whether or not they are ready to adhere to Orthodox standards. Given this situation, the compromise reached over the Kotel [Western Wall] was truly remarkable,” and it would be “devastating” if the compromise fails, Sharansky wrote.

Minsky said visits by Israeli lawmakers to North American Jewish communities can help them develop sensitivity when they are “considering legislation that may have implications for the Jewish people (as a whole), and not just Israelis,” such as the issue of Jewish prayer at the Western Wall.

After Toronto, the lawmakers traveled to Detroit to discuss the prayer conflict with local leaders. Scott Kaufman, CEO of the Jewish Federation of Metropolitan Detroit, said has “a very diverse Jewish community, but there aren’t so many barriers between them,” Kaufman told JNS.org.

“We want to be one people,” he said. “It’s about a relationship. The more we do it, the stronger the Jewish people will be.”

In the Motor City, the lawmakers toured downtown Detroit, whose historically strong Jewish community was decimated with the economic downturn that began in 2008, leading to population loss and unemployment.

“We were losing our best and brightest,” but slowly with a concentrated effort to retain talent and economic growth, the Jewish community of Detroit recovered.

Knesset members met with Jewish social entrepreneurs, and visited companies such as the mortgage lender Quicken Loans, whose Jewish founder, entrepreneur and businessman Dan Gilbert, has invested in providing an innovative high-speed internet service to the downtown through the Rocket Fiber initiative.

“I’d like them to understand there’s a community here working to build a better future,” Kaufman said. He also hopes the Israeli lawmakers will learn from the American Jewish experience and compromise on the issue of Jewish prayer at the Western Wall.

“From the American Jewish community that’s a good thing. If we can get to not fighting, even if we disagree,” he said. “We’ve got anti-Semites driving real money” against Israel, he said, citing the efforts of the Boycott, Divestment and Sanctions (BDS) movement against Israel around the world.

“That’s whom we should be fighting, not among ourselves,” he added.