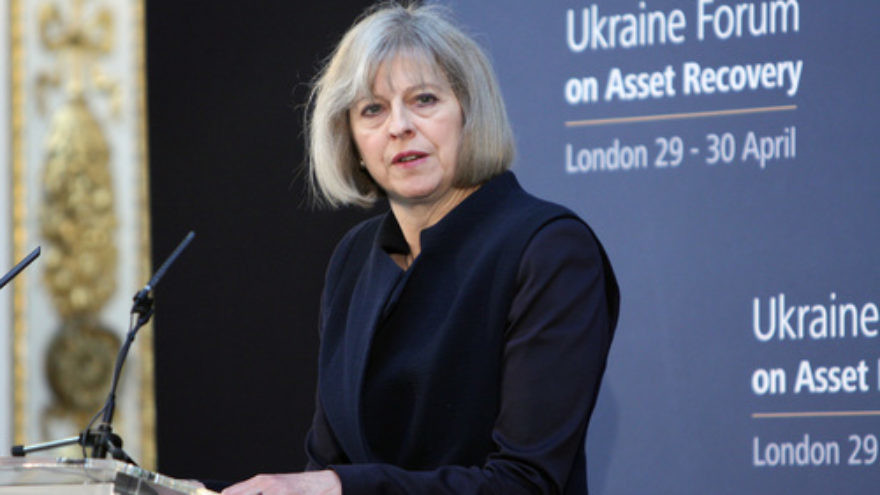 May takes over the role after all other candidates for the Conservative leadership exited the race earlier in the week, and after Cameron expedited his resignation to Wednesday, July 13 (he initially gave himself a three-month deadline for leaving office). May now becomes the U.K.’s second female prime minister after Margaret Thatcher. Her ascension to the post has been viewed positively by the Jewish and pro-Israel communities due to her record of support for those sectors.

Theresa May has repeatedly shown herself as “a committed and conscientious friend to both Israel and Jewish communities in the U.K.,” Paul Charney, chairman of the Zionist Federation of the United Kingdom, told JNS.org.

“We have no doubt that should the safety of either [community] come under threat, she will stand firm in our defense. Under David Cameron, the relationship between Israel and the U.K. remained warm and open, and we look forward to that positive relationship continuing under May,” he said.

May’s appointment comes at a challenging time for British Jews. The Conservative Party’s rival Labour Party was recently mired in a controversy over anti-Semitism. There were as many as 50 reported suspensions of Labour parliament members for anti-Semitic remarks, including of Labour MP Naz Shah and former London Mayor Ken Livingstone. Shah was later reinstated. Labour Party leader Jeremy Corbyn also came under fire for a recent apparent comparison of Israel to the Islamic State terror group, which added to his existing history of controversial remarks on the Jewish state.

A report reviewing the year 2015 by the Community Security Trust (CST), a group that works to protects British Jews from anti-Semitism, recorded 924 anti-Semitic incidents in 2015, the third-highest annual total ever recorded by CST. The number of such incidents in 2014 was even higher, largely due to the Gaza conflict between Israel and the Hamas terror group that summer.

In her capacity as home secretary, a position responsible for the internal affairs of England and Wales, May had promised to defend the country’s Jewish community and wipe out anti-Semitism.

“No one wants the school where they send their child to need security guards, or have their place of worship be fitted with security alarms and blast-resistant glass. But until that changes, the government is clear—we will stand by the Jewish community,” May said at a CST-organized event, the London Jewish Chronicle reported.

May has also worked closely with the CST, committing £13.4 million ($17.8 million) of government funds toward Jewish communal security measures in March. This figure is larger than the amount pledged by Cameron in 2015.

Gerald Ronson, CST’s chairman, thanked May and said that she gives the Jewish community in the U.K. “moral support, opposing anti-Semitism in its own right, but also correctly placing it within the wider attack upon British and western values.”

Jonathan Walker, president of the U.K.-based Anglo-Jewish Association, told JNS.org that May “has held one of the most important positions in the British government for 6 years, minister of state for the Home Office, and this has brought her into close contact with the British-Jewish community.”

Walker said May has a good record of supporting religious freedom, particularly the Jewish practices of shechita (kosher slaughter) and brit milah (ritual circumcision). There have been efforts to ban both practices across Europe, including in the U.K. In a speech at the Board of Deputies of British Jews dinner in 2013, May vowed that such efforts “will not succeed.”

The U.K. government, she said, will do “everything [it] can to ensure that Jewish people can practice their religion safely, without incurring any disadvantage—like being required to work on holy days such as Shabbat.”

Gillian Merron, chief executive of the Board of Deputies of British Jews, congratulated May on her rise to prime minister, saying in a statement that May “has been a great friend of the [Jewish] community and, during her time as home secretary, the Board of Deputies has had a very positive and close relationship with her.”

“We look forward to that relationship continuing as she moves in to 10 Downing Street and we wish her every success in her new role at this challenging time for our country,” Merron said.

Walker told JNS.org that May has developed a good understanding not only of the contributions of Britain’s Jewish community, but also of the political and security situation in Israel. In a speech for Israeli Independence Day in April 2015, May had said that “the modern state of Israel is the fulfillment of many generations of struggle.”

In 2014, May visited Israel, where she met with experts on cyber-security and modern slavery, saying those are “two challenges which both Israel and the U.K. are confronting with great determination.”

“At a time of major upheaval emanating from Brexit, having a senior, experienced serious politician in Theresa May offers the current Conservative government strong and stable leadership. For Britain’s Jewish community, there are good prospects for continued good relations with our government based on mutual respect, understanding, and fairness. For Israel, we look forward to continued good relations with the British government,” Walker said.

May’s appointment comes just days after Israeli Member of Knesset Tzipi Livni was questioned by British police on suspicion of committing war crimes in relation to Israel’s Operation Protective Edge in 2014, when she served as the Jewish state’s foreign minister.

“We would have expected different behavior from a close ally such as the U.K.,” the Israeli Foreign Ministry said in a statement about the questioning of Livni.

In 2011, the Jewish Leadership Council (JLC)—a British umbrella body for Jewish organizations, charities, and religious groups—and other U.K. Jewish groups successfully campaigned to change their country’s universal jurisdiction laws. As such, “Livni was not subjected to arrest,” said Simon Johnson, leader of the JLC.

“However, the current situation remains unsatisfactory,” Johnson told JNS.org. “It is unacceptable that democratically elected members of the Israeli Knesset should face such uncertainty when visiting the U.K. We hope that Theresa May will continue to support democratic leaders who visit the U.K. and ensure they are treated appropriately.”

Former Israeli Ambassador to the U.K. Daniel Taub told the Jerusalem Post that May has supported “efforts to deepen British-Israel ties in the area of homeland security, and [is] also very receptive to the concerns of the Jewish community regarding anti-Semitism and violent extremism.”

“Israel can rest assured that a U.K. led by Theresa May will be there in its moments of need,” said British MP Eric Pickles, the parliamentary chairman of the Conservative Friends of Israel group, in a statement. He added that May has a “deep understanding of the seriousness of the threat radical Islam poses to the U.K., Israel, and [the] wider international community. It will not be one that she takes lightly.”