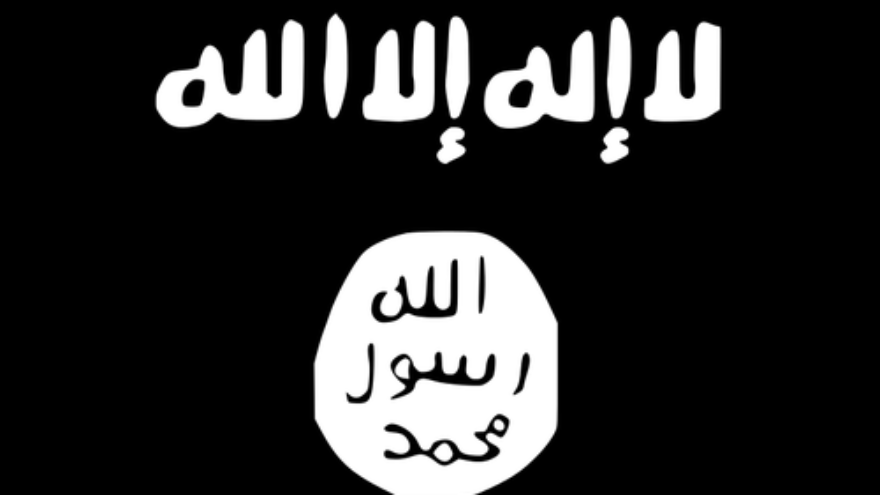 Click photo to download. Caption: The flag of the jihadist terrorist group Islamic State of Iraq and Greater Syria (ISIS), which is driving through the heart of Iraq to the capital of Baghdad and inflicting medieval-style Islamic justice on anyone in its path. Credit: Wikimedia Commons.
Republish this article
1143 WORDS
Spread the word.
Help JNS grow!
Share now:

For most Westerners, Iraq is a foreboding and dangerous place that is filled with extremists and daily violence. Yet as little as 75 years ago Iraq was a vibrant country that was home to many different ethnic and religious minorities, including large Jewish and Christian populations.

But the latest round of violence spearheaded by the jihadist terrorist group Islamic State of Iraq and Greater Syria (ISIS), which is driving through the heart of Iraq to the capital of Baghdad and inflicting medieval-style Islamic justice on anyone in its path, might be the last gasp of Iraq’s ancient Christian community, which faces extinction like Iraq’s Jewish community before it.

“Iraq used to be a beautiful mosaic made of many different faiths, including Judaism,” Juliana Taimoorazy, founder and president of the Iraqi Christian Relief Council, told JNS.org.

Like the Jewish people, the Christians of Iraq have a long and storied history that can be traced back to the very foundations of human civilization.

Most Iraqi Christians belong to an ethnic group known as the Assyrians. The Assyrian people consider themselves to be direct descendants of the numerous ancient Mesopotamian civilizations such as the Sumerians, Akkadians, Babylonians, and Assyrians.

“The Assyrians, also known as Chaldeans and Syriacs are the children of Sumerians, the original people of Iraq,” Taimoorazy said.

Mentioned numerous times in the bible from Genesis and onward, the peoples of Mesopotamia were key in formation of Judeo-Christian history. It is the land from which the biblical patriarch Abraham hailed. And later on, the Assyrians played a notable role in Jewish history, as they conquered the northern Kingdom of Israel and expelled the Jewish people to Mesopotamia. That led to the creation of Iraq’s Jewish community, which continued until the 20th century. Additionally, the Mesopotamians’ successors, the Babylonians, were the ones who later destroyed the First Temple in 587 BCE.

Christianity was first brought to modern-day Iraq by Jesus’s Apostle St. Thomas during the 1st century CE, making it one of the oldest Christian communities in the world. Christians formed the majority of the country’s population until the 14th century. The region’s Christians have subdivided since then into a number of churches, with the Chaldean Catholic Church and the Assyrian Church of the East forming the largest denominations.

Today, the Assyrians are based in northern Iraq’s Nineveh plains, where they have fought to preserve the customs, culture, and languages of the area’s past, despite facing numerous waves of persecution, mass killings, and expulsions since the invasion of Islam in the 7th century CE.

“For hundreds of years Christians have been marginalized in the Islam-dominated part of the world. After the fall of Saddam the situation has been devastating for Christian Assyrians and other minorities such as Mandeans and Yezidies,” Nuri Kino—a Swedish-Assyrian Christian who is an independent investigative reporter, filmmaker, author, and Middle East and human rights analyst—told JNS.org.

“More than 60 churches have been attacked and bombed. Rapes, kidnappings, robberies and executions [are all prevalent],” Kino added.

Kino, who has been in constant communication with friends on the ground in Iraq, said that these attacks are all a part of daily life for Assyrians “who don’t have their own militia or any neighboring country to back them up.”

According to Taimoorazy, who has also been in regular contact with a number of people in Iraq, the situation has deteriorated rapidly since the jihadist invasion.

Taimoorazy said that “water and electricity have been cut, there is a shortage of cooking gas, clean water is running out and there is a fear of an outbreak of illness where the refugees have fled.”

“This is a complete disaster for the wellbeing of our nation,” she added.

Before 2003, it was estimated that around 130,000 Christians lived in Mosul, Iraq’s second-largest city, but only about 10,000 remained before the recent ISIS invasion a week ago. Now, residents say around 2,000 Christians remain in the city. Many have gone to the surrounding countryside or to Kurdistan. Additionally, many are seeking to flee the country altogether.

“Mosul is also very important for Christians, the prophet Jonah is buried there and also Abraham is supposed to be born in that part of Iraq,” Kino said,

“I have spoken to more than 20 Assyrian refugees [in recent days]. They are all saying pretty much the same thing: ISIS is a radical Sunni Islamic group who preaches and demands Sharia laws. That means that Christians have to pay a certain tax for protection, convert, or die,” she said.

The latest attacks are nothing new for Assyrian Christians and other minorities. They have faced nearly a century of continuous assault on their way of life.

“We lost 75 percent of our nation during the Armenian, Assyrian, and Greek genocide from 1914 through 1918,” Taimoorazy said.

This has accelerated over the last decade, where nearly two-thirds of Iraq’s 1.5 million Christians have fled the country since 2003.

As the jihadist invasion continues, Iraq’s Christian leaders fear that this may very well be the end of Christianity in Iraq.

“After more than 2,000 years, during which we have withstood obstacles and persecutions, Iraq is today almost emptied of its Christian presence,” Chaldean Auxiliary Bishop Saad Syroub of Baghdad said in an interview with the international Catholic charity group Aid to the Church in Need.

“We fear a civil war. If the various different opposing internal parties do not succeed in finding an agreement, then we must expect the worst. Another war would mean the end, especially for us Christians,” added Syroub.

The modern persecution and expulsion of Iraq’s Christian and other minorities draws many parallels to the waves of attacks on and eventual expulsion of Iraq’s Jewish community during the mid-20th century, when nearly 135,000 Jews were forced to leave from 1948 onwards. Overall, nearly 900,000 Jews were expelled from their homes across the Middle East, many settling in Israel, Europe, and North America.

“The history of Jews and Christians in the Muslim dominated part of the world goes hand in hand. Massacres and atrocities to the members of the two religions have been going on for centuries,” Kino told JNS.org. “It is very sad that the colorful and very cultivated Jewish community of Iraq vanished.”

For Iraqi Christians—as well as those in Syria, Egypt, Lebanon, and elsewhere in the Middle East—their ancient communities may soon also vanish, as many flee for safety in Europe and North America.

“At the current rate, with the mass exodus which is being witnessed by the world, the number of Christians left in the Middle East will be slim to none,” Taimoorazy said.