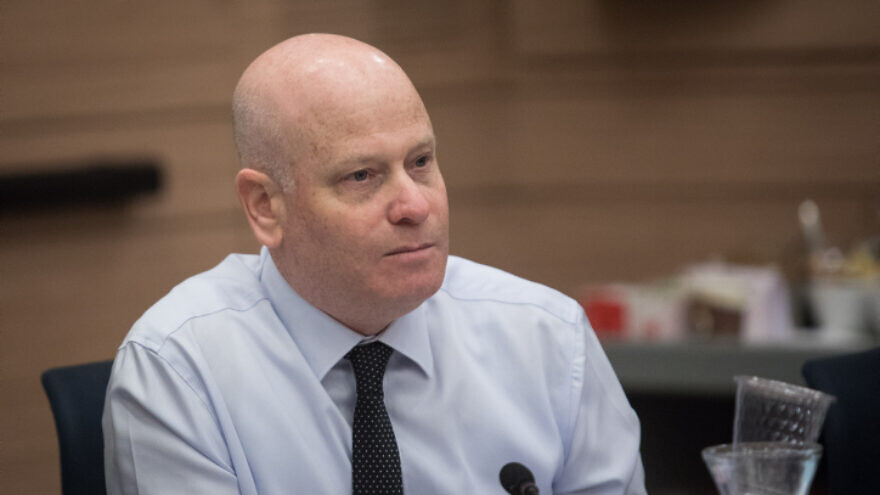 Legal adviser Eyal Yinon at during a committee meeting at the Knesset in Jerusalem on Nov. 6, 2018. Photo by Hadas Parush/Flash90.
Spread the word.
Help JNS grow!
Share now:

(January 12, 2020 / JNS) The Likud Party submitted a petition to Israel’s High Court on Sunday to block the publication of a legal opinion by the Knesset’s chief legal adviser that could pave the way for the immediate review of Israeli Prime Minister Benjamin Netanyahu’s request for immunity in the three criminal cases facing him.

The petition, which was filed on behalf of the party by Likud Knesset faction chair Miki Zohar, argues that Knesset legal adviser Eyal Yinon is unfit to rule on whether the Knesset can move forward with proceedings because his wife was a members of the prosecutorial team that worked on Netanyahu’s cases.

In 2017, Yinon and his wife, Amit Merari, signed a conflict of interest agreement barring him from taking part in issues pertaining to cases she worked on.

Yinon argued that the agreement should not be applicable in this case, saying the matter was related to parliamentary procedure in setting up a Knesset committee to oversee debate regarding the premier’s immunity request, rather than the immunity request itself.

However, the petition argues that if Yinon had been tied to Netanyahu’s legal defense, he would certainly have been prevented from ruling on the issue: “Does anyone actually believe that if Yinon’s wife was on the prime minister’s defense team, he would have been permitted to engage directly or indirectly in any matter concerning the prime minister?”

The legal opinion in question regards whether Knesset Speaker Yuli Edelstein has the authority to postpone the creation of a Knesset committee to address Netanyahu’s immunity request prior to the country’s March 2 elections.

The Blue and White Party has pushed for the immunity inquiry to take place as soon as possible, in hopes that the Knesset would reject Netanyahu’s request prior to the elections. Likud has attempted to slow the review process, in the hope that it could be delayed until after the election, at which point the party might have won a parliamentary majority and Knesset support for the immunity bid along with it.

On Saturday night, Netanyahu issued a statement blasting Yinon for being “caught red-handed,” adding, “they’ve lost their sense of shame. … He and his wife claim they did not discuss my case. Do they think we’re stupid?”