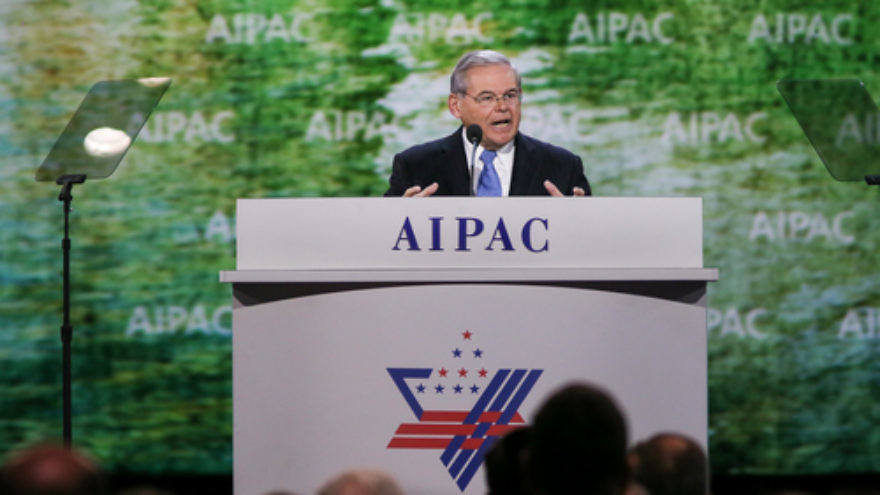 (May 7, 2015 / JNS) When Iran was in the incipient stages of its nuclear program, U.S. Sen. Robert Menendez (D-N.J.) sponsored the Iran Nuclear Proliferation Prevention Act of 1998, a bill that passed in the House of Representatives but not in the Senate. Seventeen years later, Menendez looks back with concern on how his initial calls to action on the nuclear issue went unheeded.

“We had not listened to the alarm bells… I wish others were right and I wrong, but, I was right and they were wrong,” Menendez said in an exclusive interview with JNS.org, referring to his colleagues in Congress. “We have allowed Iran to advance to the point that we are now willing to accept that a great amount of [nuclear] infrastructure will stay in place, even though it may be in violation of U.N. Security Council resolutions.”

Menendez said he is “not intimidated by anyone.” That includes his most prominent fellow Democrat, President Barack Obama, with whom Menendez has been at odds on Iran. In what may have been the harshest critique to date of Obama’s approach to the ongoing nuclear negotiations with Iran—from a member of the president’s party, no less—Menendez said in January, “The more I hear from the administration and its quotes, the more it sounds like talking points that come straight out of Tehran.”

The senator speaks with conviction and consistency about his beliefs, particularly about his support for Israel.

“It is in the [American] national security interest to have a strong, unwavering relationship with the state of Israel, to help the people defend themselves and live in peace in the land of their ancestors,” Menendez told JNS.org.

A first-generation American, Menendez is one of three Latino members of the Senate. Appointed to fill an interim seat in 2006, he was re-elected in 2007 and 2013. An early advocate of preventing Iran from obtaining nuclear capabilities, he is adamant about assuring that Congress will have the opportunity to fully review a final nuclear agreement between Iran and world powers—hence his introduction, with U.S. Sen. Bob Corker (R-Tenn.), of the Iran Nuclear Agreement Review Act of 2015. That bill was overwhelmingly passed by the Senate in a 98-1 vote on Thursday.

“Preventing Iran from attaining nuclear weapons capability is urgent for our own nation’s security as well as for that of Israel,” said Menendez. “Any deal, to be a good deal, has to be built on more than monitoring a one-year [nuclear] breakout capacity. If a year is not enough time for us to do anything other than to exercise a military response, it is not a good deal.”

Menendez said that when the nuclear talks with Iran started, “we were told that [Iran’s] plutonium reactor would be destroyed… and [the] Fordow [underground uranium enrichment facility] was to be dismantled.” Yet according to the framework nuclear deal that was reached in April, he said, “That’s not going to happen. The structure remains.” Menendez warned that “in so many dimensions, we have moved in Iran’s direction… much of the their [nuclear] infrastructure will likely stay in place. If Iran remains a threshold nuclear power for 10 years in exchange for relief of sanctions, we have gone too far towards Iran’s position.”

The senator said that the nuclear deal, as the framework currently proposes, “leaves Iran with the ability to continue to advance its nuclear capability, remaining able to use its highly sophisticated centrifuges and reduce the breakout time” to a nuclear weapon.

“The ability to have ‘anytime inspections’ [of Iran’s nuclear program] is not clearly stated in the framework,” Menendez said. The framework, instead, outlines that inspections are a committee-style process with multiple countries involved, and there is no guarantee that inspections will be allowed on demand.

“To have Iran come clean about its military and the dimensions of its nuclear program is almost absent [from the framework]… While I will reserve judgment, I am alarmed by what I see… all the more reason for Congress to have an essential role,” added Menendez.

Prior to the 2014 midterm elections, Menendez served as chairman of the Senate Foreign Relations Committee. Last month, he was indicted on federal corruption charges in U.S. District Court, relating to his alleged receipt of favors and gifts. Menendez has pleaded not guilty to all charges. Asked by JNS.org if he feels the legal action might be political retribution for his sharp policy disagreements with the Obama administration, he responded, “I hope that is not the case.”

In the aftermath of the indictment, Menendez did resign from his position as Ranking Member of the Foreign Relations Committee, and was replaced by U.S. Sen. Ben Cardin (D-Md.). He said the change in leadership has not affected the political dynamic regarding the Iran Nuclear Agreement Review Act of 2015, and that he remains in close contact on the bill with both its co-author, Corker, and Cardin.

This is not Menendez’s first experience with a uniquely timed investigation. In September 2006, just a few weeks before that year’s U.S. Senate election in New Jersey, the office of the U.S. District Attorney, then held by Republican Chris Christie (now New Jersey’s governor), began a probe of a property rental deal made by Menendez with the North Hudson Community Action Group. Some Democrats criticized the investigation—particularly its timing and the news leaks that accompanied it—as being politically motivated. Menendez was vindicated, as the case was eventually dropped by the U.S. Attorney’s Office.

Obama had vowed to veto the original version of the Iran Nuclear Agreement Review Act of 2015, but he is expected to approve the proposal’s latest iteration, which cut the duration of Congress’s period to review a deal from 60 days to 30 days.

“My aspiration,” said Menendez, “is to have the bill passed unanimously [in a full Senate vote], as it was in the Foreign Relations Committee.”

Menendez’s lofty aspiration came close to fruition on Thursday with the bill’s 98-1 Senate passage. But partisan acrimony had preceded the near-unanimous approval. U.S. Sen. Marco Rubio (R-Fla.) proposed seven amendments to the legislation, including one that demanded that Iran acknowledge Israel’s “right to exist” and another requiring the release of all American prisoners held in Iran. An amendment submitted by U.S. Sens. Ted Cruz’s (R-Texas) and Pat Toomey (R-Penn.) demanded a vote of approval in both houses of Congress before any nuclear deal can be affirmed. Both Rubio and Cruz are running for president in 2016.

Senate Minority Leader Harry Reid (D-Nev.) called the Corker-Menendez bill “too important” to be used as a pawn “in anyone’s political game.” U.S. Sen. Lindsey Graham (R-S.C.) warned that “anybody that monkeys with this bill is going to run into a buzz saw.”

“I want to try to get a process that we can approve a good deal or kill a bad one,” Graham added, urging his cohorts not to “destroy what I think is one of the most important pieces of legislation that I’ll ever deal with.”

Ultimately, the only senator to vote against the bill on Thursday was U.S. Sen. Tom Cotton (R-Ark.), who objected on the grounds that the legislation does not require a final nuclear deal to be submitted as a treaty requiring Senate approval.