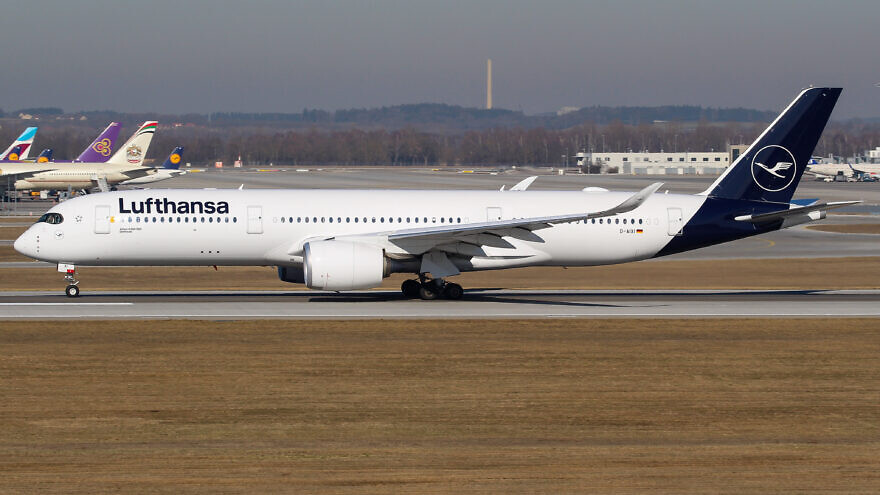 (May 9, 2022 / JNS) Jewish groups are demanding answers from Germany’s official airline Lufthansa after more than 100 identifiably Jewish Americans were denied permission to board a flight last week from Frankfurt, Germany, to Budapest, Hungary.

The airline has claimed that the passengers, who had flown into Frankfurt from John F. Kennedy Airport in New York, were not properly masked, as required by the airline.

“We confirm that a larger group of passengers could not be carried on Flight #LH1334 from Frankfurt to Budapest because the travelers refused to wear a medical mask on board. By law, Lufthansa is obliged to follow the legal requirements here,” the company tweeted on May 4.

In a May 9 letter to the airlines, Rabbi David Zwiebel, executive vice president of the Agudath Israel of America wrote: “We are in receipt of very disturbing accounts of what allegedly transpired on May 4 at the Frankfurt airport when passengers who were visibly Jewish were prevented by Lufthansa personnel from continuing their trip … several people who happened to be Jewish did not comply with a request to honor the airline’s mask mandate.

“We make no excuses for such behavior,” he wrote. “But other Jewish people who were on board that flight and who claimed to have been fully masked throughout were subsequently prevented from boarding a connecting flight to Budapest.”

“For innocent passengers to be penalized for the alleged actions of others who share their ethnicity or religion, is simply unacceptable, indeed abhorrent, here, no less than where the mistreated passengers African, Asian or Scandinavian,” he continued.

In a video recorded by a passenger, which had been posted to YouTube, but removed for violating the social-media site’s “policy on hate speech,” the man asks an airline representative why he was not allowed to continue on his journey when he had not been among the people violating the mask rule.

“Why am I lumped in with them?” he is heard asking at one point.

“This is 2022 and this is a Western country, and there’s a lot of anti-Semitism throughout the world,” he continues, calling the situation “gruesome.”

After some back and forth, the Lufthansa employee whose face is not visible in the video tells him that those who are banned are “Jewish from JFK” airport, and that “it was the Jewish people who were the mess, who made the problems.”

Other videos show police with guns in the terminal, standing guard and others speaking with passengers, including one tweeted out by a man named Yitzy Schmidt, who posted on Twitter: “I was on the flight, being guilty by association, of being Jewish. This was a classic case of pure anti-Semitism from its origination on the flight to its blunt execution at the terminal. Non-Jews from the same flight were allowed on; 150+ Jews that don’t know each other, not.”

The watchdog group StopAntisemitism.org blasted the airlines on Twitter. “ ‘Jewish people made the mess, they’re the problem,’ startling footage from a Lufthansa employee explaining why every Jew was removed from the flight over the mess of one person,” they tweeted.

The American Jewish Committee declared the incident “outrageous,” on Twitter, writing: “Banning ALL Jews from a flight because of an alleged mask violation by some Jewish passengers is textbook anti-Semitism from Lufthansa. While this is infuriating, the airline’s apathetic response is equally shocking.”

Many of the Jews were intending to travel to the town of Bodrogkeresztúr, formerly Kerestir, in Hungary for the observance of the yahrzeit (anniversary of death) of Rabbi Yeshaya Steiner. Known as the Kerestir rebbe, he was a leader of a Chassidic dynasty.