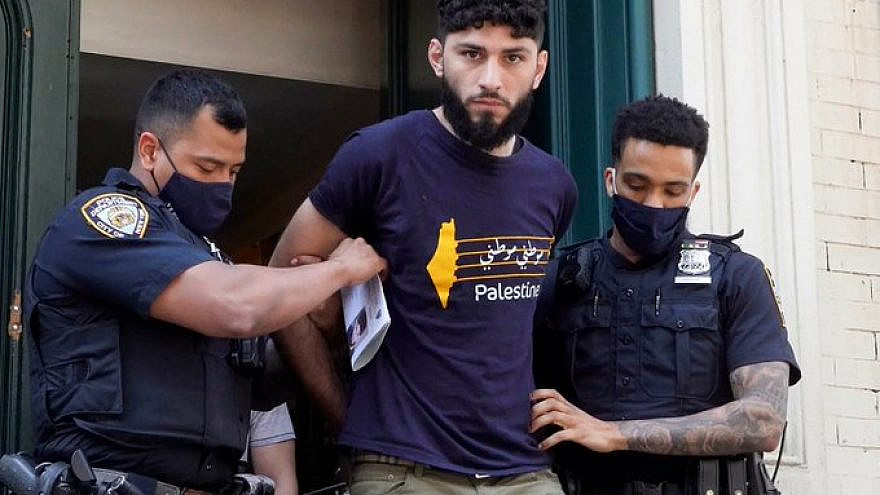 (January 12, 2023 / JNS) In the wake of rising attacks against Jews in New York City, a violent antisemitic attacker could be back on the streets in six months’ time.

According to the Canary Mission watchdog, Waseem Awadeh has been offered a plea deal by the Manhattan District Attorney’s Office. Awawdeh was charged with a hate crime for attacking a yarmulke-wearing Jewish man who was heading to a pro-Israel rally in May 2021.

“If I could do it again, I would do it again,” Awawdeh declared to one of his jailers, according to a prosecutor at Awawdeh’s arraignment in Manhattan Criminal Court. The original charges against Awawdeh carried a sentence of upwards of 10 years in prison. Under the terms of the plea deal, his sentence would be reduced to six months.

“It is outrageous that the office of Manhattan District Attorney Alvin Bragg is willing to let Awawdeh, who is violent and unrepentant, back on the streets of New York after only six months,” Canary Mission said in a statement. “With skyrocketing attacks on Jews in New York—close to 200 documented cases since 2018, there have been only two convictions that resulted in prison sentences.”

“We have only one question: Why?” Canary Mission asked.

According to statistics from the New York Police Department, there were 45 reported antisemitic hate crimes in the city last month, for an average of one every 16 hours. This represents a 125% increase over the same period last year. Anti-Jewish attacks made up 60% of all hate crimes in the city in November, far more than against any other minority group.

Under a plea deal, Canary Mission explains, the charge would be reduced to a violent class D felony, which in New York usually results in a three-to-seven-year sentence for a person found guilty at trial. However, Awadeh is being offered six months in prison if he pleads guilty to these lesser charges and forgoes a trial.

Awawdeh is accused of violently attacking Joseph Borgen, who was on his way to a pro-Israel rally on May 20, 2021, near Manhattan’s Times Square.

“They hit me with fists, kicked me, hit me with crutches, hit me with signs….They were saying, You dirty Jew, f*** Israel, go back to your country,” Borgen said in an interview with the New York Daily News after the attack.

Borgen also reported that he was maced and pepper-sprayed and suffered a concussion in the attack.

The same day, Awawdeh was part of a mob that attacked another Israel supporter. Awawdeh raised and swung his crutch wildly at the man, while fellow pro-Palestinian protester Ahmad Othman sucker-punched him and knocked him to the ground.

At the same demonstration, Awawdeh also spat on a female police officer who was attempting to maintain a barricade separating the pro-Palestinian and pro-Israel demonstrators.

That same day, Awawdeh was filmed standing with other pro-Palestinian protesters on the back of a pickup truck driving a convoy through Manhattan’s heavily Jewish Diamond District. After fellow protester Mohammed Othman threw a firework at a passerby, Awawdeh could be seen waving his crutch in a celebratory manner.

The firework burned a woman; she required hospitalization. As police and passerby tended to the victim, Awadeh and other anti-Israel protesters, some walking by and some in cars, shouted abuse.

Awawdeh later returned to the scene of the crime on foot. While running from the police, he fell and was arrested for his attack on Borgen.

Three days later, Awawdeh was released after posting $10,000 bail. He was

Awawdeh’s friends then hoisted him onto their shoulders as he held his crutch. His friends chanted, “Free, free Palestine!” while Awawdeh responded in kind and pumped his arms in triumph.

Awawdeh has led anti-Israel chants at rallies organized by Within Our Lifetime, a radical anti-Israel activist group in New York City known for its violent street protests. Within Our Lifetime states on its website, “We defend the right of Palestinians as colonized people to resist the zionist occupation by any means necessary.”

Another Within Our Lifetime activist identified by Canary Mission, Saadah Masoud, pleaded guilty in November 2022 to being part of a conspiracy to commit violent hate crimes against Jews in April 2022, June 2021 and May 2021. At anti-Israel rallies in New York City, Masoud has repeatedly assaulted Israel supporters, had multiple violent altercations with police and been arrested for assault and robbery. He is scheduled to be sentenced on March 3.