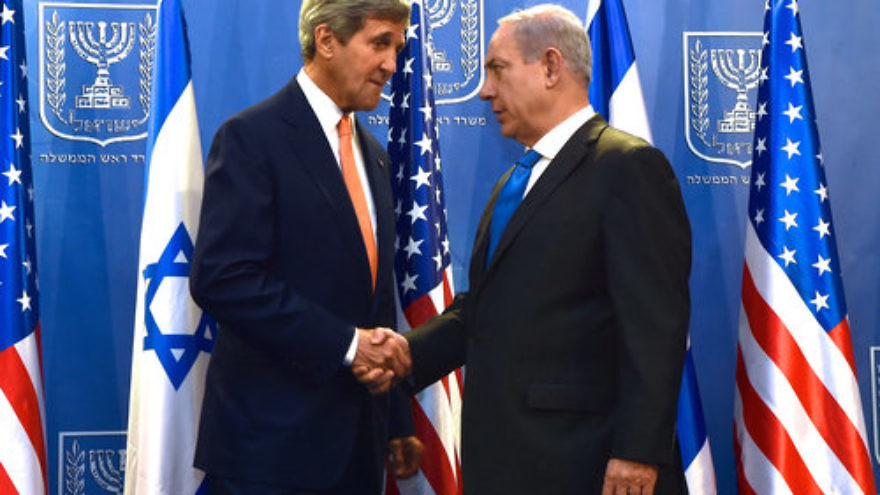 (February 21, 2017 / JNS) The chances of a formal peace agreement and normalization of relations between Israel and the wider Arab world in the near future are slim, contrary to media reports and the posturing of Israeli opposition politicians, experts say.

Citing unidentified former senior Obama administration officials, the Haaretz newspaper reported Sunday that Israeli Prime Minister Benjamin Netanyahu had met with Egyptian and Jordanian heads of state in a secret meeting last year in Jordan, in order to promote a regional peace agreement. The talks led nowhere, and Haaretz’s report blamed Netanyahu for the negotiations’ failure because he backed out over opposition from within his governing coalition.

Israeli opposition leader Member of Knesset Isaac Herzog (Zionist Union) jumped on the report Monday to blame Netanyahu for failing to reach a peace deal with the Arabs. Yet it is possible that the story is being overhyped by the Israeli political left, since the former Obama administration officials quoted in the report may have been seeking to do no more than present Netanyahu as obstructing peace. The article, meanwhile, did not mention that the gaps between Israel and the Arab world remain too large to bridge for an imminent peace deal.

Notably, word of the Jordan peace summit was kept under wraps until it was leaked to Haaretz this week, revealing the sensitivity of the issue for Jordan and Egypt, which both have peace treaties with neighboring Israel.

“This was a one-sided leak by Obama officials, suggesting there is no reason to believe there was any real prospect of negotiations on serious terms,” Eugene Kontorovich, a professor at Northwestern University School of Law and an expert on international law, told JNS.org.

Kontorovich had tweeted Sunday that the “highly selective” Haaretz report was meant to create a false impression that peace is “just around [the] corner” following President Donald Trump’s recent White House meeting with Netanyahu.

In a joint press conference with the Israeli leader Feb. 15, Trump seemed to break with decades of U.S. foreign policy by not firmly committing to supporting a two-state solution, saying that he will agree with whatever plan the Israelis and Palestinians prefer.

Arab states other than Jordan and Egypt, however, have always insisted that they would require a two-state solution to the Israeli-Palestinian conflict before publicly and formally agreeing to normalize relations with Israel. Given that a two-state solution seems further away than ever at the outset of the Trump era, relations between Israel and the Arab world will likely continue to fly under the radar, as opposed to a formal regional agreement.

The Saudi-backed Arab Peace Initiative, presented at an Arab League summit in Beirut in 2002, called for recognizing Israel if it ceded land won in the 1967 Six-Day War to the Palestinians, and allowed for Palestinian refugees to choose whether or not to return to Israel. Both of those concessions remain non-negotiable for Israel.

Sunni Arab Gulf states do not have warm feelings about the Jewish state, but they are simply willing to cooperate with Israel clandestinely in order to counter their regional archenemy—Iran. The Trump administration’s rhetoric against Shi’a Iran for being the world’s leading sponsor of terrorism, and its criticism of the 2015 nuclear deal as well as ongoing Iranian missile testing, demonstrate that the U.S. is shifting its priorities away from the Obama administration’s rapprochement with Iran and towards America’s traditional Sunni regional allies.

Therefore, the anti-Iranian stance of the Arab Gulf states puts the status-quo Sunni powers on the same side as Israel on the issue that most concerns both parties. Nevertheless, much of the Arab public opposes an open alliance with Israel, and accordingly, the Gulf states tread carefully on that matter.

Reflecting the rejectionist mood on formal Arab ties with Israel, Abdel Bari Atwan, editor in chief of the London-based news website Rai al-Youm, wrote last week, “The U.S. seeks to use the ‘Iranian threat’ to milk the Gulf states’ coffers and get them to normalize with Israel.” He claimed that the U.S. is extorting the Arab states and getting them to surrender.

“Nothing could better illustrate the new low to which the Arab decline has sunk,” concluded Atwan.

In a separate article, Abdulrahman al-Rashed, general manager of Al-Arabiya TV, wrote an article published Tuesday that carried the headline “Arab NATO in Face of Iran’s ‘Warsaw,’” in the Saudi-backed publication Asharq Al-Awsat. Al-Rashed compared the Arab states’ current predicament to that of NATO allies during the Cold War and the Soviet expansion. He questioned the possibility of Saudi Arabia, Egypt, the United Arab Emirates and Jordan forming a joint military force against Iran’s expansion, and argued that reports of cooperation between such an “Arab NATO” and Israel are premature. Even if such reports are true, he wrote, the cooperation would be limited and quiet.

Uzi Rabi, director of the Moshe Dayan Center at Tel Aviv University, told JNS.org that the discourse over Sunday’s Haaretz report as well as rumors of an emerging Israeli-Arab deal represent a “smokescreen.”

“There are a variety of ways in which tactical cooperation is ongoing with these Arab Sunni states because of mutual interests, but the Arab states have no sincere willingness to deal with the Palestinian issue,” which is a second-tier matter for those countries because they remain more concerned with their own survival. In any case, he said, the possibility of a two-state solution is eroding.

There should be cooperation between Israel and the Arab world, Rabi said, but such discussions must remain secret to avoid the embarrassment of Arab leaders.