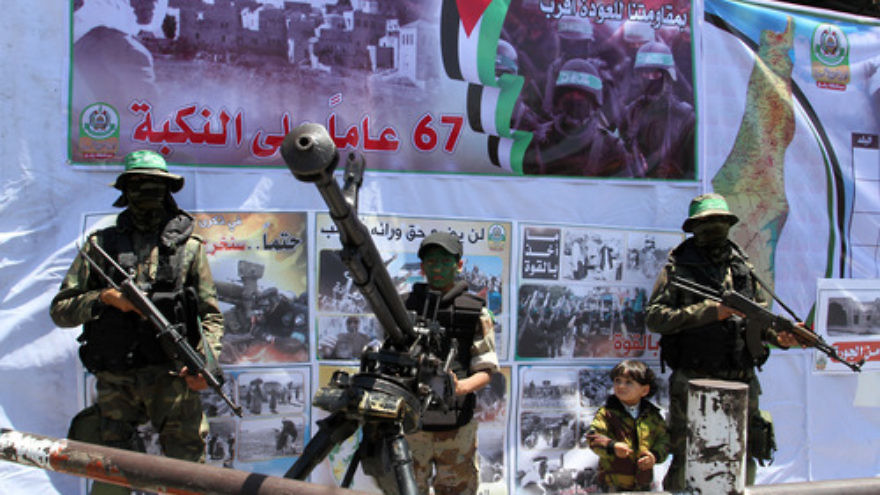 Click photo to download. Caption: Hamas terrorists participate in a militaristic rally against Israel in the southern Gaza Strip on May 17, 2015. With the emergence of Islamic State supporters in Gaza, Hamas has a new rival in the territory in governs. Credit: Abed Rahim Khatib/Flash 90.
Republish this article
1337 WORDS
Spread the word.
Help JNS grow!
Share now:

(May 18, 2015 / JNS) As Islamic terrorist organizations throughout the Middle East sink to new levels of brutality, the Palestinian terror group Hamas, which has killed hundreds of Israelis and launched thousands of rockets at the Jewish state, finds itself facing a threat to its rule in Gaza.

Over the last month, Islamic State-inspired jihadist groups in Gaza, who ironically argue that Hamas has been too lenient towards Israel and has failed to implement Islamic Sharia Law, have launched a campaign entailing both propaganda and physical attacks on Hamas.

A Salafi terror group that calls itself the “Supporters of the Islamic State in Jerusalem” recently threatened Hamas with a 72-hour ultimatum to release imprisoned Salafi extremists detained by Hamas or face attacks, after Hamas destroyed a mosque belonging to the group and arrested several of its members.

The Salafi jihadists followed up on their calls by launching mortar attacks on a Hamas base in southern Gaza and other attacks on Hamas security posts. Hamas has responded with a large crackdown, setting up checkpoints and deploying gunmen in Salafi strongholds.

“At this time, they (the Islamic State supporters in Gaza) are marginal, I don’t think they have the overwhelming public support that some of the recent headlines suggest,” Neri Zilber—a visiting scholar at the Washington Institute for Near East Policy focusing on the Middle East peace process, with an emphasis on Palestinian economics and state-building—told JNS.org.

“There is ongoing public disenchantment against Hamas inside of Gaza,” said Zilber. “Their popularity did spike after the [last summer’s] war [with Israel], as a sort of ‘rally around the flag’ effect. But conditions inside of Gaza are still quite terrible and much worse than they were before the war.”

The presence of Salafi groups in Gaza is not a new phenomenon, with several such groups operating in the coastal enclave for years. Salafism is a fundamentalist movement in Islam closely tied to or used interchangeably with Wahhabism, which is a Saudi-based ideology that has inspired Islamic extremists groups like al-Qaeda. The word “Salafi” comes from the Arabic root Salaf, meaning “predecessors” or “ancestors.” Salafis believe in the strict interpretation of Islam that upholds the Prophet Muhammad and the early Muslims who fought with him as the truest form of Islam. While Salafis have been present in Gaza going back to the 1980s, they have only more recently become more organized and thus determined to wage violent jihad.

Like the Islamic State terrorists operating in Syria and Iraq, the Salafi jihadists in Gaza do not recognize national boundaries and instead call for a global Caliphate. While they do share Hamas’s goal of the destruction of Israel, they view Hamas’s ideology as too nationalist and narrowly focused on the Palestinian cause.

These Salafi jihadists are largely “indigenous groups who have grown discontent with Hamas’s rule and their more limited and nationalistic ideology,” the Washington Institute’s Zilber told JNS.org.

“They (the Salafi jihadists) are also up against a very formidable Hamas security apparatus in Gaza,” Zilber said. “As far as domestic security services inside the Strip, they (Hamas) are by far the most powerful actor.”

At the same time, after decades of neglect by the Egyptian government, the nearby Sinai Peninsula has become a hotbed of Islamic extremist activity.

In 2014, the Sinai-based terror group Ansar Bayt al-Maqdis pledged loyalty to the Islamic State and has carried out Islamic State-style executions such as decapitations of Egyptian soldiers in the Sinai. Since then, the group has now referred to itself as Wilayet Sinai (Province of Sinai), in reference to it being a Sinai-based branch of Islamic State.

The Egyptian military, with tacit cooperation from Israel, has launched a major campaign to exterminate terror groups in the Sinai and to weaken Hamas in Gaza. Both Hamas and its parent group, the Muslim Brotherhood, are Egyptian government-designated terror groups.

Despite the growing threat of Salafi jihadists, Hamas officials have denied that Islamic State has a real presence in Gaza.

“There is nothing called the Islamic State in the Gaza Strip,” Hamas spokesman Sami Abu Zuhri recently said, Reuters reported.

“We do not fight people because of what they think, but at the same time, we do not allow any violations of security, whether by groups or individuals,” he said.

Yet the Salafi jihadists in Gaza—like Islamic terrorists in Libya, Nigeria, and the Sinai—have sought Islamic State’s blessings in their quest for affiliation with the terror group. The Salafis are making their presence known on social media, threatening Hamas with more attacks.

“They were inspired by the presence of ISIS (Islamic State) in Iraq and Syria and moreover in the Egyptian Sinai Peninsula,” Hani Habib, a Gaza-based political analyst, told Reuters.

Ironically, the menace of the Islamic State supporters may boost Hamas’s chances for survival, since Israel and others may see Hamas as a relatively stabilizing presence in Gaza compared to Islamic State.

“On a certain level, having these reports of Islamic State unrest in Gaza, it does serve one of [Hamas’s] purposes, which is that Hamas is the only one standing between the Islamic State and the complete chaos in the Gaza Strip,” Zilber told JNS.org.

For Israel, which has fought a series of deadly wars with Hamas, the Palestinian terror group’s presence in Gaza has been a serious threat to national security. But has Hamas’s governance of Gaza also created some stability? In a recent address to Israeli community leaders at Kibbutz Nahal Oz near the Israeli border with Gaza, Israel Defense Forces southern commander Maj. Gen. Sami Turgeman acknowledged as much, saying he sees no immediate alternative to Hamas’s rule in Gaza and does not believe it is possible to defeat Hamas in month-long military campaigns like last summer’s Operation Protective Edge.

“Gaza has an independent authority that functions like a country; there is a government and an annual plan, with executive bodies and inspection authorities,” Turgeman said, Yedioth Ahronoth reported.

“Most of the citizens in the Strip see Hamas as the only solution to their problems,” he said. “Whoever thinks there could be a national uprising—it doesn’t look likely. The chances it could happen are not high.”

Zilber said that there is “an ongoing debate in the Israeli political and military establishment about the best way forward in Gaza.” The analyst explained that some in Israel are advocating for maintaining the status quo of the blockade of Gaza and periodically fighting wars against Hamas, while preventing a humanitarian disaster in Gaza. Others support signing a long-term deal with Hamas, and allowing greater reconstruction and rehabilitation of Gaza to ensure a more enduring calm.

Over the last several months, it appears that Israel has taken the middle ground in Gaza, easing up on some restrictions such as exports of fruits and vegetables and allowing a greater number of reconstruction materials into the area.

“In actual terms, Israel’s policy has shifted greatly since the end of the war,” Zilber said. “It’s not a full scale hudna (Islamic long-term truce), but there has been a significant easing of some restrictions.”

Going forward for Israel, as the region becomes increasingly violent and unstable, it might be better to have the devil you know, Hamas, than the devil you don’t know, the Salafi jihadists.

“I think the middle ground will win out, while edging slightly more towards [IDF southern commander] Turgeman’s realpolitik assessment of ‘every couple of years we will have to fight a war against Hamas,’” said Zilber.