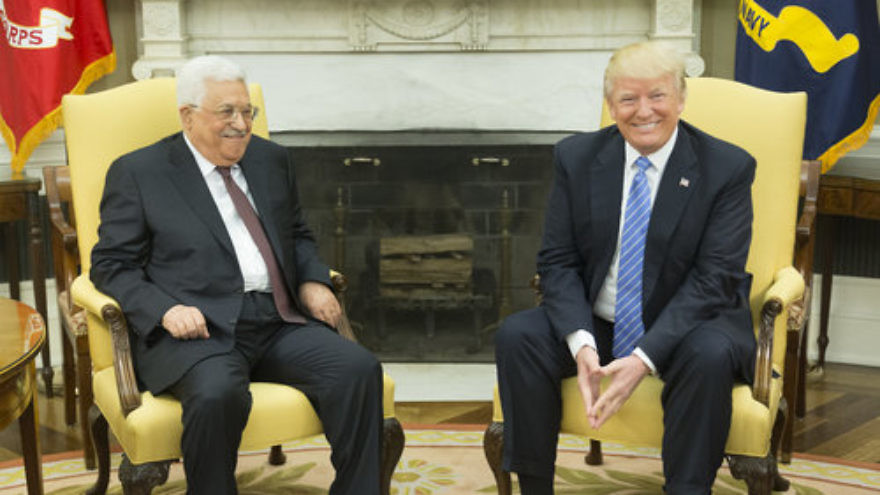 The pressure has begun.

The State Department’s “evenhanded” statement regarding the Temple Mount. The U.S.-backed Middle East Quartet’s call for “restraint.” President Donald Trump sending his international negotiations representative to the region to “mediate” between Israel and the Palestinian Authority (PA). It all adds up to one thing: American pressure on Israel to make concessions to the Palestinians.

The July 14 terror attack that killed two Israeli policemen is a clear-cut case of Palestinian aggression if ever there was one, and the Trump administration should have been clearly on Israel’s side from the beginning.

Instead, following Palestinian riots and terror attacks as well as the U.S. pressure, Israel decided Monday to discard the metal detectors in favor of “security measures based on advanced technologies.”

Security cameras had videotaped a terrorist bringing a backpack full of guns and knives into the Al-Aqsa mosque. Since there were no metal detectors, he strolled right in without the slightest interference from the Islamic Waqf officials who administer the site. The security camera footage then showed the heavily armed terrorists coming out of the mosque and beginning their murderous rampage.

Even before the two slain Israeli policemen were buried, the Palestinians launched a campaign of wild incitement. PA President Mahmoud Abbas, PA-salaried Muslim preachers and other PA officials openly called on Arabs to launch “days of rage.”

The Arab mobs have been through this drill a thousand times before. They knew what to do. And they did it. In and around Jerusalem last Friday, they tried to stone and burn Israeli police and soldiers to death.

The Trump administration should have been the first to speak out against the PA’s blatant incitement to violence. After all, if we are to believe the news reports, an angry Trump yelled at Abbas over the issue during their May 23 meeting in Bethlehem, saying the Palestinian leader “tricked” him in an earlier meeting in Washington, D.C. “You talked there about your commitment to peace, but the Israelis showed me your involvement in incitement,” Trump said, according to Israel’s Channel 2.

Well, the shock must have worn off pretty quickly, because here we are two months later, and Abbas and company are openly inciting the mobs while Trump says nothing.

In fact, his silence is worse than nothing. Heather Nauert, the spokesperson for Trump’s State Department, declared, “We support the status quo and we welcome all sides continuing their commitment to maintaining the status quo. We are encouraging both sides to not take any actions that would potentially escalate tensions.”

Every part of that statement is wrong. The U.S. should not support the “status quo.” The status quo had no metal detectors. That was the whole problem. The reason the terrorist was able to bring those weapons into the mosque, the reason two Israeli policemen are lying in their graves today, is precisely because the status quo was enabling terrorism.

Upholding the “status quo” at this point is the same as saying Israel should permit terrorists to bring in weapons.

The second part of Nauert’s statement is just as bad. Calling on “both sides to not take any actions that would potentially escalate tensions” is to treat the aggressors and the victims as equivalent. The PA is the side guilty of escalating tensions; it is the PA that Trump should be condemning and pressuring.

Then it got worse. The Middle East Quartet, which had faded into obscurity, suddenly reared its ugly head. The Quartet consists of the United Nations, the European Union, Russia and the U.S. It cannot issue a statement without the cooperation and approval of the Trump administration. The Quartet’s statement regarding the Temple Mount was to say it was “very concerned about tensions,” and call for a “solution that assures public safety and the security of the site and maintains the status quo.”

No acknowledgement of Palestinian aggression. No condemnation of PA incitement. And, once again, a call for the status quo. This is even worse than the State Department’s comments, because the U.S. is in effect collaborating with the U.N., EU and Russia in pressuring Israel.

The solution should not need to be “acceptable” to the PA, because the PA is the guilty party. Instead of remaining silent about the Palestinian riots, the Trump administration should be reading Abbas the riot act. The U.S. should have made it clear that it supported the now-removed metal detectors on the Temple Mount just as it supports the metal detectors that are in place at the Western Wall, at the Vatican, at leading mosques around the world and in every American airport.

The Obama administration was notorious for its “evenhanded” calls for “restraint” on “both sides,” which was always a code word for pressure on Israel to make concessions that will appease the Palestinians. But appeasement only encouraged and emboldened Palestinian terrorism. The new administration should not repeat this mistake.