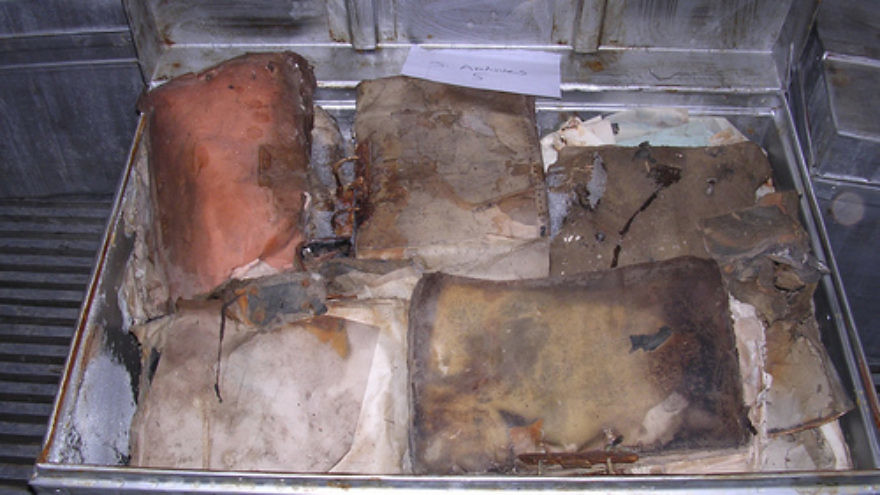 Click photo to download. Caption: Pictured before restoration, Iraqi Jewish Archive items that were recovered in by the U.S. in 2003 from the flooded basement of the Mukhabarat, Saddam Hussein’s intelligence headquarters. Credit: National Archives and Records Administration.
Republish this article
1142 WORDS
Spread the word.
Help JNS grow!
Share now:

A much-debated artifacts collection from the historical Jewish community in Baghdad that was slated to return to Iraq will remain in the United States for an additional two years, following last week’s announcement of an agreement between Iraqi officials and the U.S. State Department.

The agreement extends the exhibit of a selection of the artifacts, which is touring the U.S. and has already been displayed at New York City’s Museum of Jewish Heritage as well as the National Archives in Washington, DC. Previously, the artifacts were scheduled to return to Iraq in June.

“The Government of Iraq notes with satisfaction the remarkable success of the ‘Discovery and Recovery’ exhibit of the Iraqi Jewish Archive. This exhibit has led to an increase of understanding between Iraq and United States and a greater recognition of the diverse heritage of Iraq,” said Lukman Faily, Iraqi Ambassador to the U.S., in a statement.

“The fact that this [archive issue] is even on the agenda and being discussed, and being resolved in a way that seems to at least for the time being satisfy all the parties—that’s remarkable!” Stanley Urman, executive vice president of Justice for Jews from Arab Countries, told JNS.org.

The Saddam Hussein regime in 1984 forcibly seized the 2,700-item collection that has become known as the “Iraqi Jewish Archive” from the Bataween synagogue in Baghdad. The archive includes community records, Jewish books, and sacred items that belonged to the Baghdadi Jewish community.

“Since the material was confiscated in the first place form the Iraqi Jewish community, we got involved with the Iraqi Embassy and the State Department, telling them that this was stolen from our community and is the patrimony of our people,” said World Organization of Jews from Iraq (WOJI) President Maurice Shohet, who served on a 2010 committee that reviewed some of the archive’s materials.

“This is material that belonged to the [Jewish] community and it’s extremely important because there are personal documents and so on,” he said. “There were materials that were spiritual, unfortunately, like Torah scrolls that were buried. We had to bury them last December because they were unfit for use.”

U.S. Army Mobile Exploitation Team Alpha discovered the artifacts in 2003 when it raided the headquarters of the Mukhabarat, Iraq’s intelligence ministry. The items were found in the basement, flooded under four feet of water, requiring a $3 million, decade-long restoration process by the U.S. Archives and Records administration.

According to Ambassador Faily’s press release, items not making up the exhibit, such as duplicates of books and materials unrelated to the Jewish community, will be returned to Iraq.

Jews made up a thriving community in Iraq dating back to 720 B.C.E., and as recently as the 1940s Jews made up around a quarter of Baghdad’s population. But a June 1941 pogrom called the “farhud” presaged a much larger exodus of Iraqi Jews over the next decade. Most Iraqi Jews currently living in the U.S. are based in the New York City area, and they are hopeful that the artifacts will remain permanently at a location where they can be accessible to Jews.

Both the House and Senate proposed resolutions asking the State Department to renegotiate a 2003 agreement it signed with the Iraqi government to return all the archive’s items to Iraq following their restoration. The Senate version passed by unanimous consent Feb. 6.

“This is terrific news,” Toomey said in a statement. “These priceless artifacts will remain in the United States for at least another two years, protected and accessible for descendants and scholars. I don’t believe we should send this collection back to a country where their owners no longer reside. I applaud the State Department’s efforts and attention on this matter and will remain committed to permanently safeguarding these relics.”

The World Organization of Jews from Arab Countries (WOJAC), which has been involved in the archive issue, prefers a different approach to the Capitol Hill lobbying that has taken place.

“I spoke with the Prime Minister’s Office of Iraq and I requested that the prime minister give these artifacts as a gift to the Iraqi Jews in New York whom I represent,” said Heskel Haddad, the president of WOJAC.

Although Haddad is happy about the U.S. exhibit’s extension, he believes that it is pride—more than the actual financial worth of the artifacts—that is preventing the Iraqi government from relenting on its demand that the archive return to Iraq. He believes that requesting the archive as a gift to the Jewish community, rather than engaging in negotiations and legislative pressure, would help the Iraqis save face.

“We (Americans) don’t do things in a way that would give [other countries like Iraq] some respect,” Haddad said.

Meanwhile, requests are being taken from institutions throughout the U.S. and Canada on where to display the exhibit next. Despite the two-year extension, most reputable collections book their displays far in advance, causing a logistical problem.

Details including the location and duration of the next exhibit are still being determined, but “we hope to have something to announce soon,” a State Department official told JNS.org.

“We look forward to continuing our cooperation with the Government of Iraq on this matter so that the exhibit can be displayed in other cities in the U.S.,” the official said.

WOJI’s Shohet told JNS.org that the issue is “when you prepare for the exhibit, it takes 18 months.”

“So originally, when we were involved with preparing the exhibits and the Museum for Jewish Heritage was chosen, we knew at the time that we had enough time, but the whole thing came to be approved just recently,” he said. “So it’s hard for us to know when the next exhibition is, because all of them have plans ahead of time.”