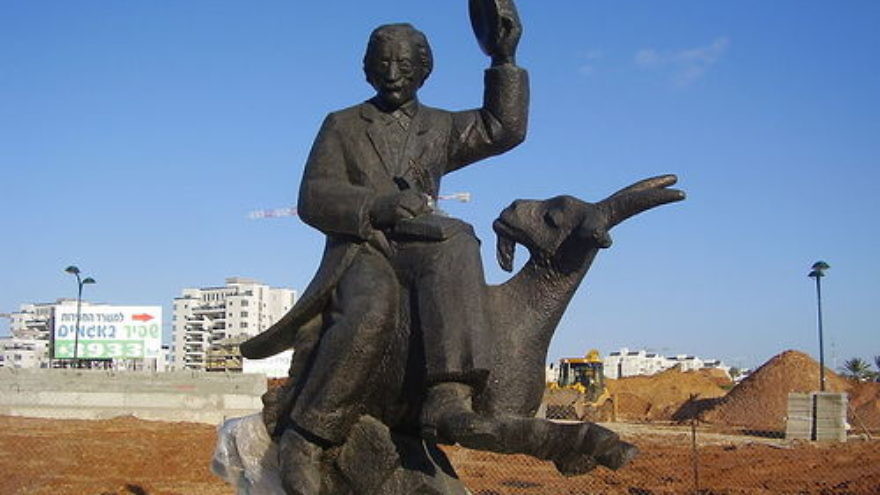 For those who try to get in better touch with their Ashkenazi Jewish heritage by studying Yiddish at the college level, there are challenges—but those can be outweighed by the nakhes (pride or pleasure) of rediscovering the nearly lost language.

“The most exciting thing about learning Yiddish is that it opens the door to the fascinating world of Yiddish culture that has flourished for over a thousand years and awaits explorers, researchers, translators and educators,” Agi Legutko—director of the Yiddish language program in the department of Germanic languages at Columbia University in New York—tells JNS.org.

Many American colleges—such as Columbia, the University of Maryland, and New York University (NYU), to name a few—have Yiddish programs. The language, which today is most commonly spoke by Jews whose ancestors hail from central and Eastern Europe, was spoken by about 13 million people before the devastation of the Holocaust.

Yiddish’s origins date back to the 11th century, when Jews settled in German-speaking lands. They came to speak a language that fused elements from German dialects with Hebrew-influenced Aramaic and Romance languages. With the eastward migration of Jews during the Middle Ages, Yiddish was transplanted onto Slavic soil, adding Slavic to the mix of languages that shaped the structure and form of Yiddish.

For many centuries, Yiddish defined Jewish existence in central and eastern Europe, and also in in New World countries to which Jews immigrated. It was the language not only of the home, but also of a rich literary culture, which like Yiddish itself combined Jewish motifs and content with European form.

Classics of Yiddish literature include the works of Sholem Aleichem (the pen name of Sholem Rabinowitz, 1859-1916), whose stories on the protagonist Tevye the Dairyman are known to a general audience as the basis for the musical “Fiddler on the Roof,” and Isaac Bashevis Singer (1904-1991), who became the only Yiddish writer to receive the Nobel Prize for Literature in 1978.

The most challenging aspect of studying Yiddish is overcoming stereotypes, Columbia’s Legutko believes.

“Many students come to class with preconceived notions about Yiddish, such as it’s not a real language, it’s a dialect, it doesn’t have grammar, it’s a language of jokes and curses,” she says. “It’s a full-fledged language, and I place a lot of emphasis on grammar in my teaching, so the students are often surprised that they have to learn grammatical rules and concepts that are entirely foreign to English-speakers, such as dative and accusative cases; or to memorize lists of irregular past participle forms of verbs.”

Another challenge students encounter, says Legutko, is that the language taught in academia is standard Yiddish, the so-called klal shprakh (an equivalent of Received Pronunciation, or Queen’s English in Great Britain), which was created by the YIVO Institute for Jewish Research prior to World War II and is a variety that almost none of the Yiddish speakers hailing from Europe use.

“The students trying to communicate in Yiddish with the native speakers, often encounter some sort of resistance such as, ‘No, this is not how you say it,’ which may be discouraging,” Legutko says. “But the nakhes of Yiddish is greater than these challenges.”

Born and raised in Kraków, Poland, Legutko didn’t know she was Jewish until she was 23. By then, she was already deeply submerged in Jewish culture and history, working as an English-speaking tour guide to Kazimierz, the former Jewish quarter of Kraków and a town which boasts more than 700 years of Jewish history.

“I was fascinated with Jewish traditions and religion, loved reading Singer, and only then found out about my Jewish roots. … Talk about genetic memory. I started learning Yiddish in order to read Singer in the original, but also as a way of going back to my roots,” Legutko says.

“I grew up in a Yiddish-speaking family in Ukraine, worked as managing editor of the Moscow Yiddish literary monthly Sovetish Heymland, and my Oxford doctoral dissertation was on Yiddish,” Estraikh tells JNS.org. “I teach almost exclusively graduate students. I try to equip them for their research. It is important to teach the cultural/historical context as well. When students study the language, they find grammar most challenging. Unfortunately, the majority of American students have problems with such things.”

Adi Mahalel, a Yiddish instructor at The Joseph and Rebecca Meyerhoff Center for Jewish Studies at the University of Maryland, did not grow up with Yiddish, but went on to study the language as an undergraduate at the University of Haifa and at Columbia completed his PhD on the Yiddish/Hebrew writer Il Peretz.

Originally, Mahalel studied Yiddish because he wanted to read authors Aleichem and Singer in the language, but he tells JNS.org that his quest turned into more than that.

Legutko says students no longer struggle to find opportunities for the practical use of Yiddish.

“It’s true that there is no country where you can go to have a full submersion in the language, but with the Internet and new Yiddish initiatives underway, there are many opportunities to practice the language,” she says. “I teach Yiddish in New York, so my task is easier—there are a great number of leynkrayzn, reading circles, [and] svives, hangouts, as well as lots of possibilities to interact with secular Yiddish speakers, or Yiddish native speakers residing in Hassidic neighborhoods of Boro Park or Williamsburg, though being a male gives you advantage in that context.”

There are also many opportunities to practice Yiddish online, notes Legutko, such as courses offered by learnyiddishlive.com or the Yiddish Book Center. Columbia is now also preparing an online database of Yiddish learning opportunities.

Estraikh believes studying Yiddish “is the same as to learn any other language, unless the student finds in Yiddish an ideological reasoning for something.”

“Yiddish is an excellent key to academic research, and those who have this key use it,” says the NYU professor.