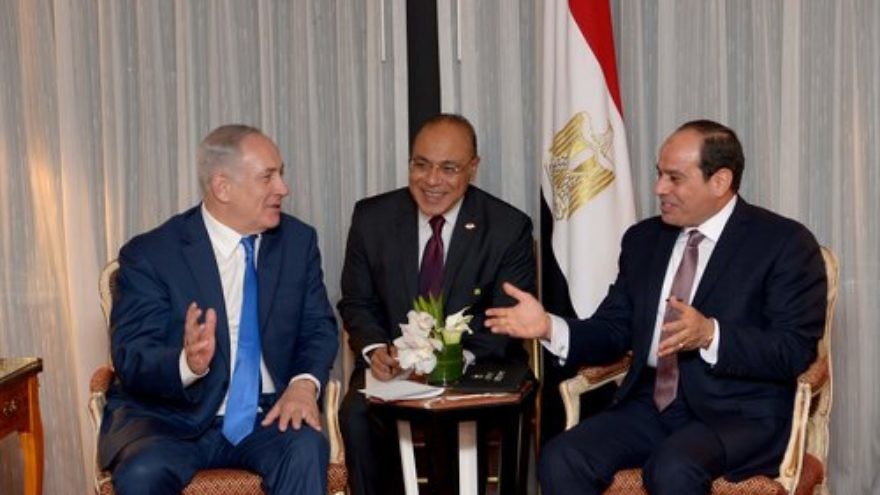 The meeting comes amid speculation of an historic shift in Arab policy towards the Jewish state.

During the hour-and-a-half meeting at the Palace Hotel, the leaders engaged in “a comprehensive discussion about the problems of the region,” according to a statement by the Israeli Prime Minister’s Office (PMO).

El-Sisi “expressed his desire to assist in efforts to achieve peace between Israel and the Palestinians and the region,” the statement said.

The Egyptian president’s office released a similar pronouncement, saying the two discussed “ways to resume the peace process and establish a Palestinian state.”

Regarding the peace process, Palestinian Authority (PA) President Mahmoud Abbas — who is also in New York at the U.N. confab — was notably absent from the meeting, but met with El-Sisi in Cairo in mid-July.

“The meeting (between Netanyahu and El-Sisi) represents a public step to further coordinate with Israel on a host of issues, from containing the Islamic State in the Sinai, reining in Hamas in the Gaza Strip, to trying to stem the tide of Iranian influence in the region,” Prof. Joshua Teitelbaum, senior research fellow at the Begin-Sadat Center for Strategic Studies, Bar-Ilan University, told JNS.org.

“While the Egyptian press played up the issue of the Palestinian-Israeli negotiations, it is most likely that the Israeli and Egyptian leaders discussed these other issues,” he said.

Israel and Egypt are “really on the same page on a host of regional issues,” Teitelbaum noted, and “the public nature of the meeting demonstrated El-Sisi’s confidence in his position at home.”

The last time the two leaders met was in secret in April 2016 at El-Sisi’s presidential residence in Cairo. Israeli opposition leader Isaac Herzog accompanied Netanyahu at that meeting, where the leaders discussed a potential regional peace initiative, Haaretz reported at the time.

Additionally, a secret summit held in Aqaba, Jordan — initiated by then-U.S. Secretary of State John Kerry — reportedly occurred in January 2016 and included El-Sisi, Jordan’s King Abdullah and Netanyahu. Netanyahu was said to have outlined a five-step plan aimed at promoting a regional peace initiative with Arab states and reviving peace talks between Israel and the Palestinians.

This week’s meeting between Netanyahu and El-Sisi comes just days after Bahrain’s King Hamad bin Isa al Khalifa condemned the Arab world’s boycott of Israel in an unprecedented declaration by an Arab leader.

The public showing of warming ties between Israel and Egypt and the Bahraini declaration fall in line with the narrative often touted by Netanyahu over the past two years that a significant regional shift is occurring, and that Arab nations are becoming more pragmatic in their approach toward relations with the Jewish state.

Netanyahu, speaking at an event earlier this month hosted by the Israeli Foreign Ministry, noted the current shift in Arab sentiment towards Israel is more profound today than the improved relations seen following the 1993 Oslo Accords with the Palestinians and the 1994 Israeli peace treaty with Jordan.

“What’s happening now with the Arab bloc states has never before happened in our history—even when we signed agreements,” Netanyahu said, Israel’s Channel 2 reported. “What we have now is greater than anything else during any other period in Israel’s history.”

For his role in forwarding Arab relations with Israel, El-Sisi has been praised by many supporters of the Jewish state, who view him as an important ally in maintaining Egypt’s 1979 peace treaty with Israel, fighting Islamic terrorism, and confronting Iran.