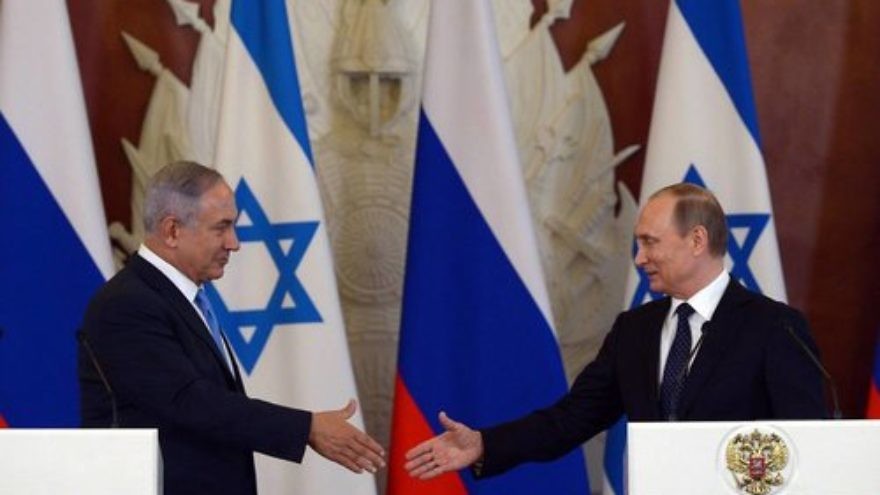 The issue of Iranian forces attempting to establish a permanent military presence in Syria, near Israel’s northern border, is reportedly high on the agenda for the upcoming meeting.

Iran’s activity makes “the need to have an open channel of communication between Israel and Russia even more important than it was some years ago,” Prof. Eyal Zisser, a senior research fellow at the Moshe Dayan Center for Middle Eastern and African Studies, and the vice rector of Tel Aviv University, told JNS.org.

Putin and Netanyahu have held five other bilateral meetings during the past two years to discuss regional issues, and to help maintain a protocol that prevents friction between their nations’ air forces when they operate over Syrian airspace.

Netanyahu last met with Putin in Moscow in March, when he conveyed Israel’s strong opposition to the presence of Iranian forces and terror proxies—many equipped with Russian-made heavy artillery—operating in southern Syria near the Jewish state.

“The Russians have made it very clear that they don’t care about the establishment of an [Iranian-led Shi’a land corridor] along Israel’s northern border,” said Zisser.

Israel and Jordan have also reportedly lobbied Putin and the Trump administration for the establishment of a secure buffer zone between Israel, Jordan and Syria, as part of any future negotiated resolution to the six-year-long Syrian Civil War.

During their March meeting, Netanyahu reaffirmed to Putin that Israel’s control over its northern Golan Heights region would not be discussed in any negotiations toward resolving the Syrian conflict.

Since becoming actively involved in the Syrian Civil War in 2015, Russia has worked closely with Iran in support of President Bashar al-Assad’s regime. Israel, meanwhile, has allegedly conducted several missile strikes targeting Iranian-sponsored weapons convoys heading to the Hezbollah terror group in Lebanon, as well as strikes responding to projectiles fired during the fighting in Syria that have landed in the Jewish state.

Netanyahu said in July that a cease-fire agreement in southern Syria, brokered by the U.S. and Russia at the G20 Summit in Germany, perpetuates the presence of Iranian forces near Israel. America and Russia responded to Netanyahu’s criticism by saying Israel’s interests would be taken into account in the war-torn state.

“Israel is not happy about the cease-fire agreement that was signed,” Zisser said. “This is why it’s important to have a dialogue…and put pressure on the Russians to change this agreement, or improve and update it.”

The cease-fire is purportedly based on the premise that Assad remains in power while the advance of Iranian-sponsored forces is inhibited. Critics contend that Russia and Iran may be using the cease-fire to consolidate their gains and launch new offensives.

Indeed, in early August, Russian military forces were reported to have replaced the Syrian regime’s military presence in Daraa and Quneitra in southern Syria, while constructing a base in the area, indicating that Russia intends to create a more permanent military presence near Israel’s northern border.

Citing a senior Israeli official, Haaretz reported in July that Israel is aware of Iranian plans to not only send military advisers to Syria, but also to build up forces there through the establishment of a permanent air and naval bases.

At the same time, it is unclear how long the current cease-fire will last. Previous cease-fires negotiated with Russia during the Obama administration’s tenure failed to halt the violence in Syria.