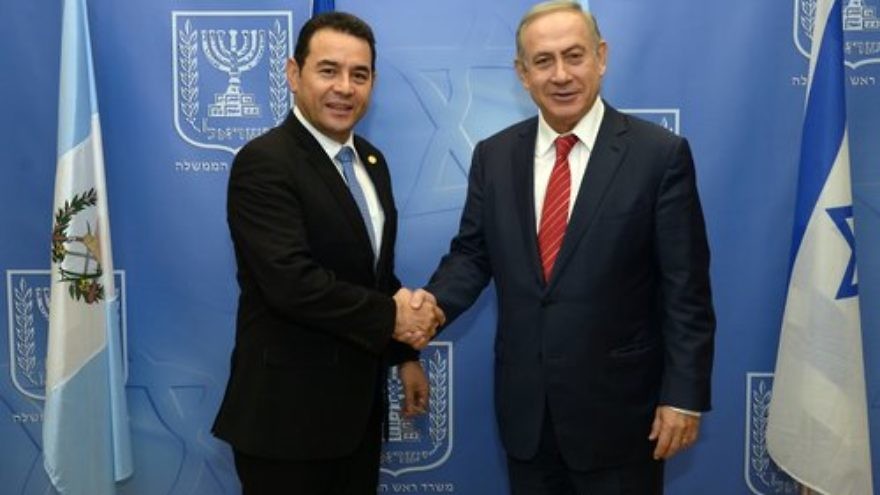 Israeli Prime Minister Benjamin Netanyahu’s historic visit to Mexico and Argentina in mid-September is expected to improve trade ties for Israel and open the dialogue with Latin America’s Jewish community.

It marks the first time a sitting Israeli head of state will visit the region.

“Netanyahu’s visit is an important instance in the strengthening of bilateral relations between Israel and Latin American countries,” Claudio Epelman, executive director of the Latin American Jewish Congress, told JNS.org.

“In Latin America there are many Jewish communities, all very different from each other, big and small, but they all share a great affection for the state of Israel,” Epelman said. “This is without a doubt an incredible opportunity for dialogue.”

Netanyahu’s visit is part of a broader effort to improve ties with non-traditional allies such as African and Asian countries, as well as Muslim-majority nations.

As part of this initiative, Netanyahu visited western Africa in June to expand ties on that continent, following his historic trip to eastern Africa last year — the first such visit by a sitting Israeli prime minister in 29 years.

In February, Netanyahu declared that Israel is “pivoting toward Asia” before visiting Singapore and signing a bilateral treaty with Japan that same month. In March, he visited China with a large Israeli business delegation to mark 25 years of Israeli-Chinese diplomatic relations, and in July, India’s Prime Minister Narendra Modi visited Israel in the first-ever visit to the Jewish state by a sitting Indian head of state.

The objectives of Israel’s pivot towards Africa and Asia are the same as those in Latin America: improving the outcomes for the Jewish state on U.N. votes, expanding economic cooperation, curbing Iranian influence on those continents and bolstering diplomatic relations.

“Latin America has always been friendly to Israel, but I think we’re at a position where these relationships can be far, far, far advanced,” Netanyahu told Morales. “I look forward to visiting Latin America….”

Israel is Mexico’s largest trade partner in the Middle East, with bilateral trade between the two nations amounting to $700 million in 2016.

Challenges in the region

Although Israel enjoys warm relations in Latin America, the region is also fraught with challenges for the Jewish state.

In recent years, several South American nations formally recognized Palestinian statehood, starting with Brazil’s 2010 recognition of a Palestinian state based on Israel’s pre-1967 lines.
In the summer of 2014, five countries—Brazil, Chile, Ecuador, El Salvador, and Peru—recalled their ambassadors to Israel in protest of Israel’s Operation Protective Edge in Gaza against the Palestinian terror group Hamas.

In February 2016, the Palestinian Authority opened its first-ever embassy and diplomatic mission in the Western Hemisphere—in Brazil. At the same time, Brazil refused to accept Israel’s nominee as its ambassador to the South American nation, former Israeli settlement movement leader Dani Dayan.

Israel has also faced diplomatic challenges in Venezuela, where its former Ambassador, Shlomo Cohen, was expelled in 2009, amid warming relations between that country with Iran and Hamas.
At the same time, Israel also faced a diplomatic spat with Mexico earlier this year when Netanyahu commented on the successful fence along its border with Egypt, which the Trump administration has pointed to as a model for its potential border wall with Mexico.

Prior to the Israeli government’s recent initiative to expand relations in Latin America, activists and lawmakers in the region began promoting a positive image of Israel to combat the growing influence of the BDS movement, the Palestinians, and Iran in their countries.

During the Israel Allies Foundation’s Latin America Summit in March 2016, parliamentarians from 13 Latin American and Caribbean nations signed a resolution in support of Israel and against BDS.

Echoing these sentiments, Mexican politician Hugo Eric Flores Cervantes — an evangelical Christian — asserted there should be no boycotts of products made in the disputed territories during a visit to Samaria this summer. And he urged Mexico to deepen trade with Judea and Samaria.

Israel also enjoys the support of millions more Evangelical Christians in Latin America. Dr. Luis Fernandez Solares, the International Christian Embassy of Jerusalem’s (ICEJ) Guatemala national director, said at the recent 2017 Herzliya Conference, that Latin American evangelical institutions should increase their cooperation with Israel and local Jewish communities to combat “leftist” leaders in the region with close ties to Arab nations as well as Iran and the Palestinians.

Following his South American visit, Netanyahu will address the U.N. General Assembly Sept. 19 in New York. His appearance will coincide with the 70th anniversary of the 1947 U.N. Partition Plan, in which 13 Latin American and Caribbean countries voted for the creation of a Jewish state in the former British Mandate of Palestine.