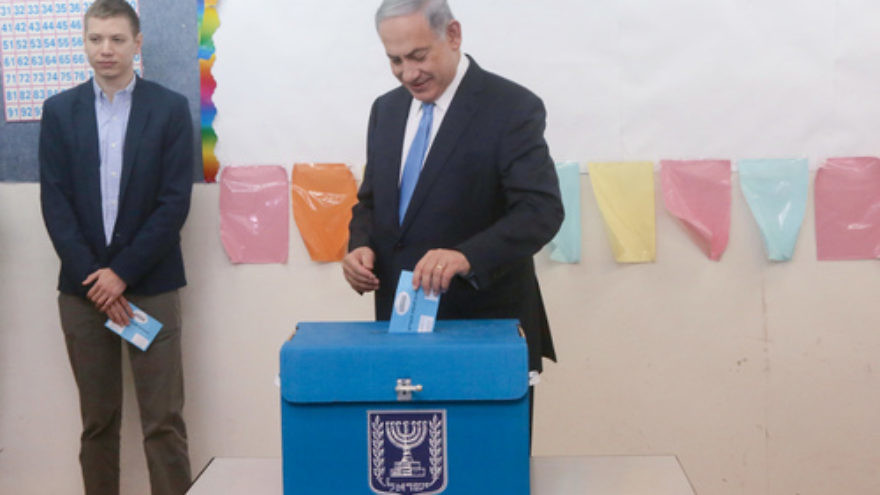 (March 17, 2015 / JNS) After trailing in the polls leading up to Tuesday’s Israeli election, Prime Minister Benjamin Netanyahu’s Likud party defied those projections with a sweeping victory over the Zionist Union party, according to official results released Wednesday. Netanyahu is in strong position to extend his current six-year run as prime minister.

Likud won 30 Knesset seats, a comfortable margin over the 24 seats for Isaac Herzog’s Zionist Union party. Totals for the rest of Israel’s parties were as follows: 13 seats for the Joint Arab List, 11 for Yesh Atid, 10 for Kulanu, eight for Jewish Home, seven for Shas, six for United Torah Judaism, six for Yisrael Beiteinu, and four for Meretz.

Israelis cast votes for entire parties, not for specific candidates. The president (currently Reuven Rivlin) usually gives the leader of the party that won the most Knesset seats the opportunity to form a governing coalition with other parties. To create a government, that leader’s coalition must consist of at least 61 of the 120 Knesset seats. The Jewish Home, Shas, United Torah Judaism, and Yisrael Beiteinu parties are seen as likely coalition partners for Likud, while Kulanu leader Moshe Kahlon has been perceived as a “kingmaker” in the coalition-building process because it is uncertain if his centrist party will support the right-wing Likud or the left-wing Zionist Union. With Kulanu in the fold, a Likud-led coalition would have 67 Knesset seats.

“Against all odds: a great victory for the Likud. A major victory for the people of Israel!” Netanyahu tweeted after Tuesday’s television exit polls were released. The final results were even more favorable for Netanyahu than the exit polls, which had projected either 27 of 28 Knesset seats for Likud and 27 for Zionist Union.

The latest pre-election surveys had predicted that Zionist Union would outperform Likud, likely based on voters’ prioritization of socioeconomic issues. Likud’s victory, however, might affirm that Israeli voters still place a high priority on security. In January, the Israel Democracy Institute’s (IDI) monthly Peace Index poll projected that 40 percent of Israelis would make their voting decisions based on a party’s socioeconomic issues, compared with 32 percent deciding on a party’s foreign policy and security stance. But on election day, it may have been security that won out.

“My experience and my understanding in Israel is that ultimately, security is the issue on the minds of Israelis: left, right, center,” Stan Steinreich, president and CEO of Steinreich Communications, a New Jersey-based public relations firm that also has an office in Israel, told JNS.org. “The economy and the economic outlook are important, but secondary.”

Following Netanyahu’s much-debated March 3 speech to the U.S. Congress about Iran, an Israel Hayom-New Wave Research Institute poll revealed that 41 percents of Israelis would place their trust in Netanyahu to deal with the Iranian nuclear threat, far more than the 6 percent of respondents who chose Herzog. (Fifteen percent said they trust U.S. President Barack Obama the most with the Iranian nuclear issue.)

In the same poll, 46 percent of respondents said Netanyahu’s Congress speech—which, given its proximity to the election, drew accusations from the Israeli left of being politically motivated—was the right move, while 39 percent thought it was a mistake. Netanyahu had argued that his speech was motivated by Israel’s survival, which he believes would be jeopardized by a bad nuclear deal between Iran and the P5+1 powers, a group of nations that includes the U.S.

A governing coalition led by Zionist Union would have been expected to make more concessions in the Israeli-Palestinian peace process than Netanyahu’s Likud, perhaps going as far as considering the division of Jerusalem. On Monday, a day before the election, Netanyahu vowed that a Palestinian state would not be established under his watch, reversing the support for a two-state solution that he expressed in a 2009 speech at Bar-Ilan University.

“I think that anyone who moves to establish a Palestinian state and evacuate territory gives territory away to radical Islamist attacks against Israel,” the prime minister told the NRG news website.

Steinreich, who stressed that his public relations firm did not take a side in the Israeli election and does not get involved in any political campaigns, told JNS.org that “we saw, most definitely, a shift in tactics by Netanyahu in the final 48 hours or so in terms of trying to harness the right.”

“Polling in Israel, like polling here in the [United] States, is a tool, and I think what you saw in this particular election was actually a shift in strategy in order to try to close the gap a bit,” Steinreich said, referencing the fact that Likud trailed Zionist Union in pre-election polls.

Labor MK Erel Margalit, the 12th-ranked candidate on Zionist Union’s list, told JNS.org at the recent American Israel Public Affairs Committee policy conference that the Israeli-Palestinian peace process “deserves much more attention” than it is getting at the moment.

“The time to lead some of these discussions is perhaps when the world is not totally focused on it, when you can be proactive about this,” Margalit told JNS.org, adding that both sides in the conflict should understand not only what they have to gain from a peace deal, but what they have to lose in the absence of an agreement.

Yet even if Zionist Union would have pushed for a major shift on the Israeli-Palestinian front, March’s IDI Peace Index poll revealed that almost two-thirds of Israeli Jews (64 percent) believe the peace process will not advance no matter which party forms the next government.

Regarding U.S.-Israel relations, the same poll said that 49 percent of Israeli Jews believe that the Obama administration will be friendlier to a Herzog/Livni government than one headed by Netanyahu, while 33 percent said the White House would show the same level of friendliness to either government. Netanyahu’s Congress speech, which the Obama administration opposed on the grounds that House Speaker John Boehner did not consult the president before inviting the prime minister, was the latest episode in a history of tension between Obama and Netanyahu.

“As the small country (Israel) dealing with the larger country (the U.S.), I think we have more of the responsibility to maintain the trusted nature of the relationship between the executive offices,” Zionist Union’s Margalit said.

But in a pre-election interview with Israel Hayom, Netanyahu dismissed the premise that a Herzog/Livni government would mean smoother U.S.-Israel relations.

“The relationship with the U.S. is strong enough,” said Netanyahu. “It will experience ups and downs, currently on its way up. The support for Israel among the American public is at an all-time high. The support for me personally has also gone up over the last year. We are not going to lose the American public just because we are standing up for ourselves. On the contrary: A prime minister who stands up for himself is often respected for it. True, there will always be those who think differently, but at the end of the day we need to stand up for ourselves.”

When they merged their parties, Herzog and Livni initially agreed to rotate the role of prime minister if they form the government. But on Monday, Livni said she would forgo the rotation and leave the premiership for Herzog alone. Before Livni’s announcement, Netanyahu had told Israel Hayom that both Livni and Herzog are “unworthy” of being prime minister.

“They will not last one day under the pressure,” Netanyahu said. “They will not be able to curb Iran’s nuclearization for one day. They have already admitted that the moment they are elected they will go to Ramallah. And I know exactly what will happen there: They will offer the Palestinians a state that would see Jerusalem divided and be adjacent to Tel Aviv, similar to previous offers. They will offer Palestinian Authority President Mahmoud Abbas immediate territorial concessions and a second ‘Hamastan’ will arise. Then we will have a double Iranian threat: a nuclear threat and the threat of an Iranian proxy right here at the heart of Israel.”

Herzog wrote in a blog post for the Times of Israel, “Bibi (Netanyahu’s nickname) failed to find solutions to the housing crisis and to the cost of living. … I will set up a national housing cabinet and I will sit at its head in order to ensure affordable housing. We will put an end to the national shame of poverty among the elderly, and we will heal and strengthen our health and education systems.”

Netanyahu, however, told Israel Hayom that his government had “addressed the economic issue in a way that no government before us ever has.”

“We accomplished a lot in the economic social realm,” he said. “True, there is plenty of work left to do, but I would like to remind everyone of Israel’s economic growth, which already exists, which led to low unemployment that has been maintained here for decades. The number of employed Israelis is constantly on the rise. We increased participation in the work force, among the ultra-Orthodox as well. In addition, we built unprecedented transportation infrastructure in a way that hasn’t been seen since the establishment of the state. We broke up the natural gas monopoly and drove down energy prices, which in turn reduced food prices.”

The current Likud-led government also “identified the problem in the housing market and we are planning to increase the housing supply by building 100,000 new units in lots that will be cleared for that purpose in high-demand areas in central Israel,” Netanyahu said.

“We will reinstate the mortgage subsidies that [Finance Minister Yair] Lapid did away with,” he said. “Having already lowered the customs tax, we will cancel the value-added tax on basic staples under supervision. This will translate into savings for the consumers. All these things will ease the burden and reverse the trend in the rising cost of living.”

Steinreich called the election a “Jeb Bush-Hillary Clinton face-off in Israel,” in reference to the presumed favorites in the upcoming 2016 American presidential race.

“You had a dynasty that Netanyahu has built for himself because of the legacy of his time in office, and you have Herzog, who comes from a political dynasty,” he told JNS.org. Herzog’s grandfather was Israel’s chief rabbi, and his father was the Jewish state’s sixth president.

“I think you had two very, very strong candidates, and I think the numbers played out that way in terms of how close [the election] actually was,” said Steinreich.

“The greatest message here, in my opinion, is that this is democracy in action,” he added. “It really shows the world that there is an open and positive dialogue and political debate in Israel, and I think members of the Israeli public are not as set in their ways as some people may portray them in the media. I think it shows the pluralism in Israel on the part of the electorate.”