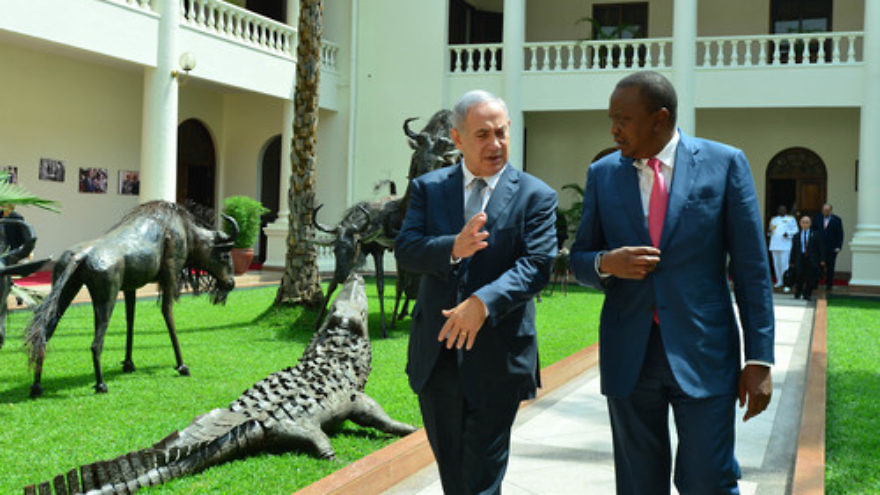 In the first decades of Israeli statehood, the Jewish state had good ties with many countries across the 54-nation African continent. But following decisive military victories by Israel over its Arab neighbors in the 1967 Six-Day War and the 1973 Yom Kippur War, Arab nations pressured many of those countries to break off relations as part of a decades-long diplomatic assault to isolate Israel.

Yet today, with Israel growing into an economic, technological, and military leader, African nations are understanding the potential value of renewed cooperation with the Jewish state.

“From the point of view of international relations, economy, science, sport, trade, political cooperation in the United Nations, it is very important. It’s obvious, it’s absolutely obvious,” said Zvi Mazel, whose former roles include Israeli ambassador to Egypt and deputy director-general of Israel’s Foreign Ministry in charge of African relations.

“What Netanyahu is doing right now is very important, but it should have been done a long time ago. It’s overdue,” Mazel told JNS.org.

Mazel explained that the 1993 Oslo Accords between Israel and the Palestinians “changed the way most third-world countries looked at Israel,” noting that once the peace agreement was signed, “many African nations renewed relations with Israel.”

Following the signing, in the mid-1990s, Mazel traveled across much of Africa, including to Uganda’s Entebbe Airport, the site of the dramatic rescue of 100 Jews and Israelis taken hostage on an Air France flight on July 4, 1976. The rescue mission was led by Yoni Netanyahu—the current prime minister’s brother—who was the only Israeli commando killed during the otherwise successful operation.

Prime Minister Netanyahu’s diplomatic tour began in Uganda with a July 4 ceremony to mark the 40th anniversary of the Entebbe rescue. Netanyahu proceeded to Kenya, where the current president’s father and Kenya’s first president, Jomo Kenyatta, had permitted an Israeli Hercules C130 aircraft to land and refuel during the rescue operation 40 years ago.

In addition to marking the historic rescue and his family’s tragedy, Netanyahu went to Africa to re-establish diplomatic ties with nations that are culturally worlds away from Israel, despite what Mazel described as being “just a few hours away by plane.”

As both prime minister and foreign minister in the current Israeli government, Netanyahu—with the help of Foreign Ministry Director-General Dore Gold—has made significant efforts to improve diplomatic ties with many nations across the Middle East, as well as neighboring Africa.  Gold visited South Africa this past March, in advance of the first visit by an Israeli prime minister to Sub-Saharan Africa in nearly 30 years.

A primary goal of Netanyahu’s Africa visit was to engage the diplomatic support of African nations, particularly in the U.N., whose numerous anti-Israel resolutions are often passed with the relative strength of the 22-nation Arab League and the 27-nation European Union (which recently lost the United Kingdom as a member).

According to Mazel, African nations voting in favor of Israel can help tip the scales on key U.N. resolutions.

“There are 193 countries in the United Nations. Every country has an equal vote and every vote is very important,” Mazel said.

According to Roni Akale, director-general of Israel’s Ethiopian National Project, Israel has much to offer the African continent, but the benefits are not necessarily readily appreciated.

“Many of the African countries are historically anti-Israel, but only because they don’t really know Israel,” Akele told JNS.org.

In line with the stories of many other Ethiopian-born Israelis, Akele crossed Ethiopia by foot at the age of 20, walking 800 kilometers (500 miles) to Sudan before arriving in Jerusalem in December 1983 during Operation Moses.

Akele suggested that Ethiopian Israelis “can be a good bridge” between Israel and Ethiopia, which holds a key diplomatic position in Africa and was the final stop on Netanyahu’s trip.

“Ethiopia is an extremely important country. Most of the African Congress is sitting in Addis Ababa (Ethiopia’s capital). When Israel and Ethiopia are in good relations, it is very easy for Israel to contact the other nations through Israel’s ambassador in Ethiopia,” Akele said.

Israel, meanwhile, “can do a lot to help Ethiopia in the areas of agriculture, hi-tech…Israel can also provide assistance in education, particularly in the areas of modern technology,” he said.

Mazel agrees, saying that Israel “has a lot to propose” to nations across Africa. “It really has a lot to offer in terms of economy, trade, science, sport, and more,” he said.

While Mazel sees tremendous value in Netanyahu’s uncommon multi-state trip, he suggested that the trip should be followed up immediately with constructive efforts to build on the gains of the four-day tour.

“One trip to Africa is not enough. It’s a good beginning. But we should see some content from it in the coming months and years,” Mazel said.

Mazel argued that Israeli officials should travel to Africa “twice or three times a year.”

“First of all, we should send our professional ministers—of agriculture, of trade, of science. We should encourage our businessmen to go there as well,” he said.

Similarly, Mazel noted that African officials should be invited to Israel. He said, “We should regularly invite them to events in Israel, invite them to see the universities, and to explain the possibilities of cooperation.”

Mazel would also like to see the Israeli government build on Netanyahu’s four-nation trip by visiting the rest of the continent, which contains more than 50 countries.

“We should pay attention to our friends, and not only to important countries like England, Germany, and France,” added Mazel.