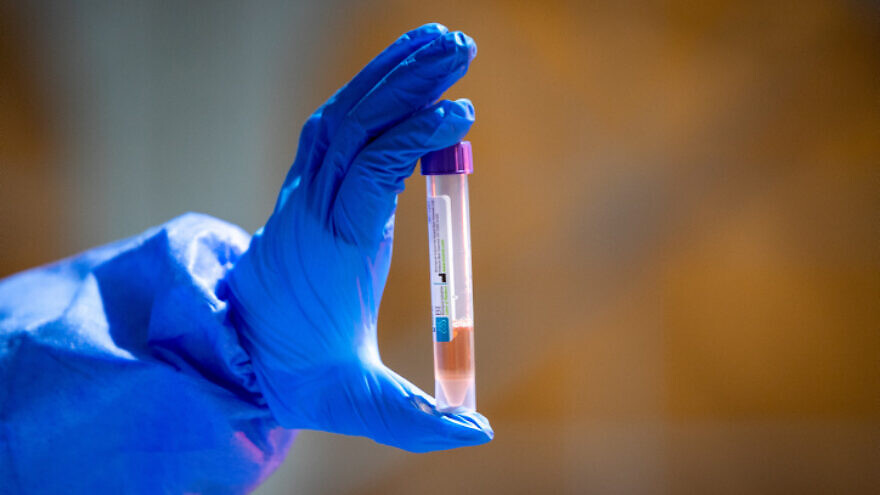 (March 16, 2022 / JNS) A previously undetcted variant of the COVID-19 virus has been discovered in Israel, the country’s Health Ministry announced on Wednesday.

The variant, a combination of Omicron BA.1 and BA.2, was discovered in two PCR samples via genetic sequencing in recent days, the ministry said in a statement.

“This combination strain has yet to be seen anywhere else in the world,” according to the ministry, though the two cases were individuals who entered Israel from abroad and were tested at Ben-Gurion International Airport.

“The concept of combination variants is well known,” Israel’s coronavirus commissioner, professor Salman Zarka, told Army Radio. “At this stage, we are not concerned about serious illness,” he added.

The two individuals in whose samples the strain had been identified suffered from mild symptoms of fever, headache and muscle aches, and did not require any special medical treatment, according to the Health Ministry.

The announcement came after KAN News reported on Tuesday night that a “Deltacron” variant had entered Israel.

“We found a combination of the original Omicron with BA.2,” Health Ministry director-general Nachman Ash told Israel Radio on Wednesday morning. “It is not ‘Deltacron.’ We do not yet know the significance of the new variant,” he said.

He added that it was probable that the individuals were infected before boarding their flight to Israel, though “it could be a variant created by us.”

The Health Ministry and the government have been concerned about a new outbreak in recent weeks, as the COVID virus’s reproduction or “R” rate has been rising.

In addition, cases have been rising again in several other parts of the world, including Hong Kong, Germany and Britain.

Israeli Prime Minister Naftali Bennett held a meeting on Wednesday with Health Minister Nitzan Horowitz and other senior ministry officials to evaluate the situation in the country, releasing a series of updated guidelines for the public.

The obligation to wear masks in closed spwill continue and only be re-evaluated before Passover, they said.  The Magen Avot project to protect the elderly weill contiue. At the same time, the country will work to expan the deployment of HEPA air filters in schools.

Bennett and Horowitz also said that officials would continue to push for the unvaccinated to get the jav and confirm the country’s stock of vaccines and drugs so that Israel will be prepared if there is another COVID wave.