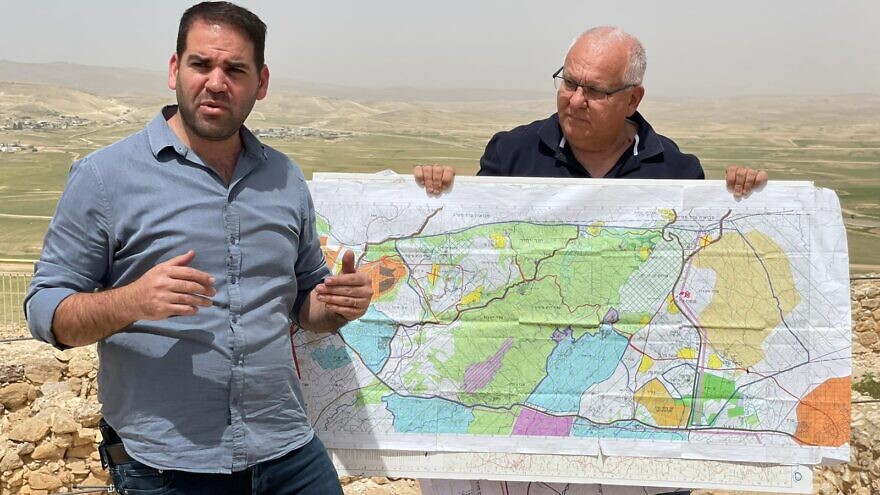 (April 19, 2022 / JNS) Israel’s government has approved 13 new communities in the southern Negev region, where the spread of unregulated Bedouin encampments has grown to such dimensions that some Israelis call it a national security threat. The government hopes that the new towns, approved over the last few months, will check illegal Bedouin squatting and strengthen Israeli sovereignty in the region.

It approved plans for Kasif, designed as an ultra-Orthodox city of 100,000, in the northeast of the Negev; Telah, a city of 20,000 in the region’s northwest; and Nitzana for 2,200 families in the southwest along the border with Egypt. It also approved five new communities along Highway 31 between Arad and Beersheva, referred to collectively as Mevo’ot Arad, or “the Arad Region”; and an additional five along Highway 25 between Beersheva and Dimona. On March 10, the government also approved a plan to develop a town, Ir Ovot, in the Arava, an area of the Jordan Valley south of the Dead Sea.

“Against all odds, we passed government decisions to establish 13 settlements in the Negev and one in the Arava,” Israel’s Interior Minister Ayelet Shaked posted in a celebratory tweet on April 10 together with a video of herself clinking glasses with Minister of Housing and Construction Ze’ev Elkin. Elkin affirmed in the video, “We succeeded against all odds.”

The five areas making up Mevo’ot Arad are the most important on a “strategic, nationalistic, Zionistic and regional level,” Yishai Merling, head of the Settlement Division of the World Zionist Organization, told JNS. The Settlement Division is the Israeli government body that handles the development of towns in the Negev, the Galilee, Judea and Samaria, and the Golan.

“From the moment I entered the Settlement Division, I saw my No. 1 task, without question, as Mevo’ot Arad. In my eyes, this is the most important thing this government has done up until now,” he said, adding that the last time the government did anything “this big” was in 1982 when it established a large number of Jewish communities in a short time in the Galilee. 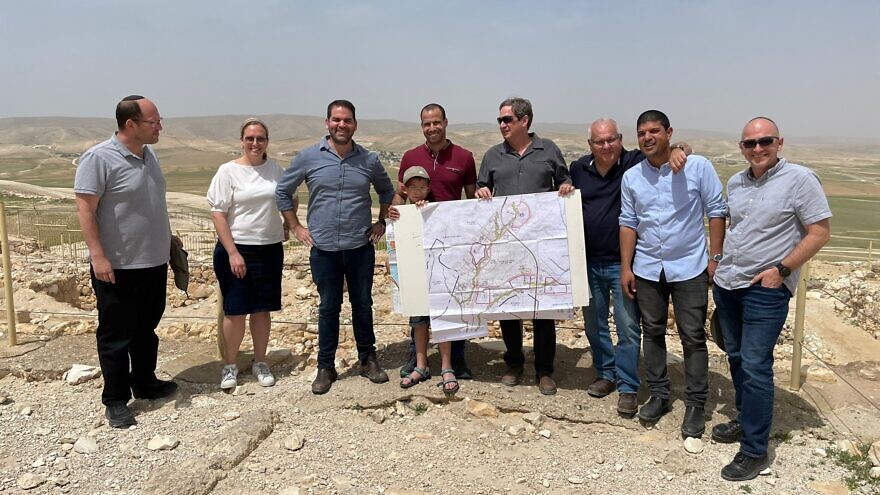 Yishai Merling (third from left) with other members of the World Zionist Organization’s Settlement Division team in the Negev. Credit: Courtesy.

Mevo’ot Arad is important, says Merling, because 1) it builds Jewish presence over a strategic area, roughly rectangular in shape, between Beersheva and Arad in the south and Hebron and Lachish in the north; and 2) it bolsters Israeli sovereignty around Arad, which he says is rapidly turning into a giant Bedouin encampment. Along Highway 31 from the Shokat Junction eastwards to Tel Arad, a distance of about 16 miles, “we can see the Bedouin completely gaining control of the region. From a bird’s-eye view, the place is full of illegal Bedouin camps.”

Merling said Bedouins have turned to violence along Highway 31, rioting and knocking down light posts. “Jews have been forced to travel in protected convoys just to get home,” he said.

“Those five settlements of Mevo’ot Arad will help establish territorial continuity between Arad and Beersheba,” he said. “We’ve found that where there’s strong settlement and agriculture, there’s security.”

‘This area is not going to remain a vacuum’

The new Negev communities come not without controversy. Opposition has been voiced by the professional staff of the planning division in Shaked’s own ministry, which is against the development along Highway 25. Staff in Israel’s Ministry of Finance, led by Avigdor Lieberman, who supports the plan have also expressed opposition. The finance ministry staff argues that the new communities are too expensive. The interior ministry’s planning division argues that they will weaken existing ones, pulling citizens from the older towns to the newer ones with better infrastructure.

“Everyone looks at this from their own narrow angle,” said Merling. “You have to understand what’s happening on the ground. Every day a new [Bedouin] house is being built. This area is not going to remain a vacuum. Either there’s going to be Bedouin dispersion or there’s going to be Jewish settlement.”

Indeed, given the time it can take to move from the planning to the building stage (Merling estimates five to seven years), the government has included in its decision the possibility of establishing “temporary camps” in the areas where the communities are to be established in order to pre-empt a Bedouin takeover.

Israel’s Minister of Environmental Protection Tamar Zandberg of the left-wing Meretz Party also opposed the new plan. In a heated exchange with Israeli Minister of Justice Gideon Sa’ar of the right-wing New Hope Party at a cabinet meeting on March 27, in which the government decided to move Mevo’ot Arad forward, Zandberg called the settlements “destructive.” Sa’ar accused Zandberg of being “hateful” towards Jewish settlement.

Zandberg tweeted later that day that “the frenzy of establishing wasteful settlements in land and resources will not strengthen the Negev but will weaken it. It will compete for a strong population with existing cities. It will cost much more precisely in an era of a cost-of-living and housing crisis, and it will harm open spaces and natural systems in an era of climate crisis.”

Naomi Kahn, director of the NGO Regavim’s international division, told JNS that Zandberg is being selective with her anger, noting that the minister didn’t protest when the government decided earlier to establish three communities dedicated to the Bedouin (a fourth Bedouin town will be built as one of the five to be established on Highway 25). “It seems in Zandberg’s mind, only Jewish settlement will harm the environment,” she said.

“There is a massive housing crisis in the State of Israel,” said Kahn. “The Israeli government has invested billions in relocating major sections of the army down to the Negev. People need somewhere to live if you expect them to work there.”

The three biggest problems in the past were that Bedouins were given free land in a new town but would continue to live on their illegal holdings, despite agreeing to move into the town. That led to a second issue where the town would be riddled with large empty spaces claimed by non-resident owners. Finally, Israel legalized illegal settlements, incentivizing the Bedouin to stay put and wait out the government.

Kahn said Regavim has developed a staged approach to ensure that Bedouin relocate to the new towns.

“The Supreme Court ruled the Bedouin are a protected minority, and therefore, they’re allowed to have all their communities built for them to help them protect their unique social and historic and religious culture,” she said. “We just want to make sure that the land reserves that are used to create these communities are used properly.”