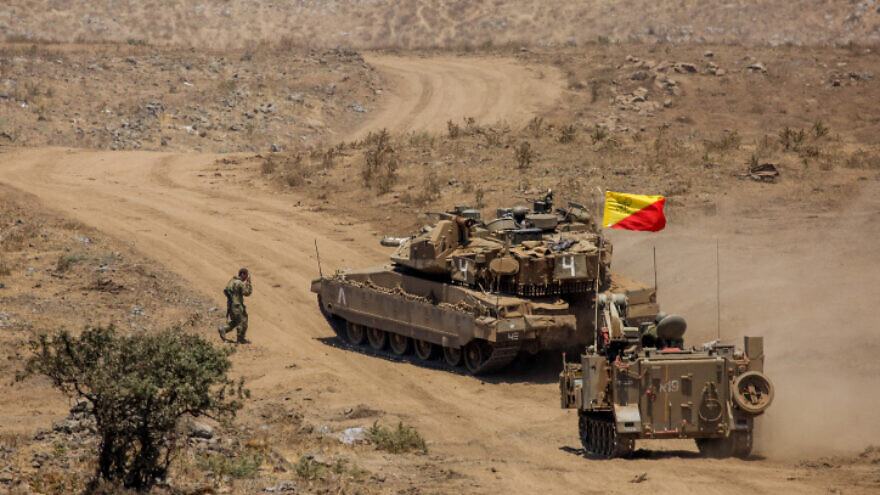 Israeli soldiers during a drill near the Israeli-Syrian border in the Golan Heights, on Aug. 4, 2020. Photo by David Cohen/Flash90.
Republish this article
1413 WORDS
Spread the word.
Help JNS grow!
Share now:

(November 10, 2020 / JNS) Hezbollah’s presence in southern Syria is significantly larger than previously known by the public, according to recently released report released by the Alma Research and Education Center.

Alma’s goal is to further geopolitical knowledge about the Middle East among English speakers. Based in the Galilee, the organization was founded by Lt. Col. (res.) Sarit Zehavi, who has served for 15 years in the Israeli Defense Forces, specializing in Military Intelligence.

The latest report revealed the location of 58 sites linked to Hezbollah’s activities in southern Syria, in the Quneitra and Dara’a provinces.

Two primary Hezbollah units, acting under Iranian patronage, are responsible for this deployment: The “Southern Command,” made up of veteran Hezbollah operatives embedded in the ranks of the Syrian Armed Forces; and the “Golan File” unit, which involves Hezbollah commanders orchestrating localized terror cells, made up of Syrians.

Alma’s report highlights the presence of 30 Golan File locations and a further 28 Southern Command unit sites. “In the research, we were able to reach exact coordinates in some places and a general location in the rest,” the report stated.

Maj. (res.) Tal Beeri, director of Alma’s research department, told JNS that both of these Hezbollah efforts are operational, and both are designed to create new opportunities to attack Israeli military and civilian targets during both routine times and in security escalations.

Beeri, who spent 20 years as an IDF intelligence officer specializing in Lebanon and Syria, described how Hezbollah’s Southern Command was formed, saying that its initial goal “was to facilitate the Syrian army’s retaking of southern Syria. It trained and assisted the Syrian army, which retook territory from rebel organizations that since 2012 came to control nearly all of southern Syria.”

According to Beeri, the Southern Command “is a unit made up of hardcore Lebanese Hezbollah personnel. Each one is tied to the Syrian army as an educator, with an emphasis on the 1st Corps [of the Syrian Army] in southern Syria. They accompanied [Syrian President Bashar] Assad’s forces as they retook the area.”

Beeri added that Alma has gotten hold of a video showing a Syrian military unit in training with its commander summarizing the drill and “thanking the Hezbollah operative standing next to him for the assistance. It’s an unequivocally incriminating video showing that Hezbollah came and helped the Syrian army. It is totally embedded in it, sitting in Syrian bases, in Syrian army uniforms. There is a photo of a joint patrol—anyone looking at it would think the Hezbollah operative was another officer in the Syrian army.”

With the completion of Assad’s conquest of southern Syria, Hezbollah’s Southern Command is continuing to train the Syrian army, as there are still pockets of rebel resistance, mainly in Da’ara province, according to Beeri. “But, in actuality, Southern Command started dealing with its second objective, which is to become operational on behalf of the Shi’ite axis and looking ahead to war with Israel. It is preparing operational plans and conducting intelligence-gathering in anticipation of the next war. In our assessment, every Syrian army base in the area, which collects visual intelligence, signals intelligence and electronic intelligence, has a Southern Command unit member sitting in it. They are there, passing the information on.”

Asked whether Assad has approved the Hezbollah operations, Beeri argued that the Damascus regime has little say in the matter after Iran and Hezbollah rescued it from the abyss.

“Who is Assad? The Iranians made a clear statement about this in late May during ‘Jerusalem Day,’ when they released a cartoon of [Supreme Leader Ayatollah Ali] Khamenei and all of Iran’s proxies praying in Jerusalem. You can see that in the front row are [Hezbollah chief Hassan] Nasrallah, the head  of Palestinian Islamic Jihad, Ziad Nakhaleh, Ismail Haniyah [chairman of the Hamas Politburo], the Houthis, even Venezuela’s Nicolás Maduro. Ten or eleven rows back is a barely recognizable Assad. He isn’t counted. He’s not exactly relevant,” said Beeri.

After rescuing Assad, Iran and Hezbollah remain committed to gaining a foothold in Syria, with their central goal being the ability to attack Israel on behalf of the Shi’ite-Iranian axis. To this end, Iran has attempted to smuggle many weapons and personnel into Syria, and construct bases of attack—an effort that has so far been hampered by a campaign of Israeli airstrikes.

One of the most recent reported strikes occurred on Oct. 19, apparently targeting a Hezbollah-linked terror target in southern Syria, one day before Alma’s report was published.

“The Assad regime is their platform. He invited them into Syria; what could be better for them? Now that they are here, Assad doesn’t have much of a say on what they can do,” according to Beeri.

While some sections of the Syrian Armed Forces are not in favor of this Iranian-Hezbollah dominance, they don’t have much of a choice in the matter, he added.

‘Exposing the scope of the deployment’

Hezbollah’s second unit in southern Syria, the Golan File, serves as a proxy terror network. “It is made up of local Syrians, residents of the area—some are former rebels, some are ex-Assad military, some are ex-militia members that were loyal to Assad,” explained Beeri. “They work under Hezbollah’s command. The commanding officer is a senior Hezbollah operative, who passes on instructions to local commanders and cell commanders. In many areas, the local commanders are Syrians.”

These attack cells are deployed throughout the Golan Heights—with an emphasis on the border with Israel—in villages that straddle the whole of the border and inwards into Syria as well.

Their role, Beeri said, is to gather intelligence ahead of terror attacks, such as planting bombs, sniper attacks and firing anti-tank missiles. “They have anti-tank missiles of all varieties. Our working assumption is that this includes some highly advanced missiles.”

Financial incentives offered by Iranian and Hezbollah recruiters in a war-torn country with a failed economy helps keep the ranks of this network full.

Asked how Alma compiled its detailed report, Beeri said that all of the information is based on open-source material.

“We know what to look for; that is half of the work. Some of us are former members of the defense establishment,” he said. “We activate professional data miners who scan through open sources, looking for this authentic information. It is mostly from Arab sources. Specifically, for this report, we heavily relied on Syrian opposition forces that draw their information from the ground.”

Alma monitors events on the ground, including through routine, direct observations. The organization’s singularity stems in part from the fact that its employees live close to the Syrian and Lebanese borders, and travel around the area as part of their everyday lives.

“We released a smart map with multiple layers of data that shows 58 sites of the two Hezbollah units. The map also shows where the IDF reportedly struck in the past,” he said.

One of those locations, struck the night before the report was published, already featured on Alma’s map as an enemy location. “We could point to the map to see who was the commander there, which cell was present—all based on our database,” said Beeri.

“The uniqueness of our work is in exposing the scope of the deployment,” he said. “Fifty-eight sites is a very big deployment.”

Such terror cells can sting Israel during routine times, but during conflicts, if the IDF plans on entering Syria or even if it focuses all of its efforts on Lebanon, the cells will attack Israeli soldiers, vehicles and target Israeli civilians in northern Israel. “The IDF would overcome them, but they will cause harm,” stressed Beeri. In the event of an escalation, he said, “the IDF will need to allocate resources to deal with them.”

Since 2014, the cells have sporadically planted explosives, targeting IDF soldiers.

“Everyone is talking about the next Northern War because there is now a single front across Lebanon and Syria,” said Beeri.

In its executive summary, the Alma report said, “Under the patronage of the Iranian Quds Force (part of the IRGC), a military terrorist infrastructure has been established on the Syrian border with Israel, enabling the opening of another front on the Syrian border, equivalent to the Lebanese front against Israel. These two units, the ‘Southern Command’ and the ‘Golan File’ pose an ongoing operational and intelligence challenge for the State of Israel and stability in the region.’ ”