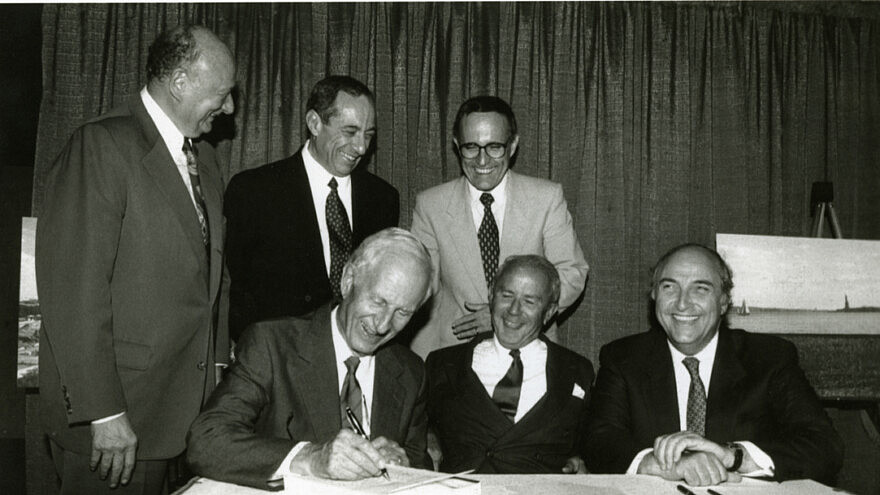 (November 9, 2022 / JNS) Manhattan’s Museum of Jewish Heritage-A Living Memorial to the Holocaust will host its annual Generation to Generation event on November 15, bringing together friends and family to support the museum’s mission of fighting bigotry and anti-Semitism through learning and teaching the lessons of the Holocaust.

This year marks the 25th anniversary of the museum’s inception. Museum co-founder George Klein stressed the importance of the event, which engages with the second and third generations of survivors.

“This generational event has existed for some time now,” Klein said. “There are still a few survivors among us, but not many. Thank G-d we have recordings of their testimonies.”

He added, “Before we got started, New York was the city with the largest number of Jews and had many Holocaust survivors and yet had no ‘Holocaust museum.’”

“In 1978, Jimmy Carter established the President’s Commission on the Holocaust. Mayor Ed Koch also felt that the city needed something to add to ‘the New York story,’ and so he created a task force in 1981, which I chaired,” Klein continued.

“We studied this matter for a year, and in May of 1982, we issued a report. The bottom line was that we should create a ‘living memorial’ to the Holocaust. And we felt that the memorial which would deliver the proper responsibility was a museum. Before this, there were attempts in New York to make memorials that were statues and edifices but none of them materialized,” he said.

Klein is one of the last living co-founders of the museum. He emigrated to the United States in 1938, a year before World War II began. Many of his relatives in Europe perished in the Shoah. Klein cited his father Stephen Klein as an inspiration. The elder Klein served during and after World War II on the Vaad Hatzalah (the “Rescue Committee”), a U.S. group that worked to save Jews, including hidden children, in Europe. He also recalled that his father helped an uncle who survived Auschwitz and came to live with his family after the war.

“The original name was ‘A Living Memorial to the Holocaust-The Museum of Jewish Heritage.’ Later on, the name was reversed to better reflect its mission,” Klein said. “The museum tells the story of how Jews lived before and after the war and how they rebuilt their lives from the ashes in both the U.S. and Israel.”

Robert P. Morgenthau, son of co-founder Robert M. Morgenthau, the longest-serving district attorney in the history of the State of New York, said, “It’s just incredible, the resiliency of spirit. At events such as the Generation to Generation dinner, you hear uplifting stories. You can’t help but leave these events and your interactions with survivors who attend without having that incredible feeling, knowing about those who came out of the Holocaust and then seized the opportunity to stay alive. It’s a lesson for the human spirit and optimism.”

He explained, “We built two buildings since 1997. It started with the original six-sided building [representing the six million Jews who were murdered in the Holocaust] and later the Robert M. Morgenthau wing, which began construction in 2001.

“Plans were already in place, but after 9/11 New York came to a halt, but my father and fellow trustees got together and decided that ‘We are going to show everyone that Manhattan is still alive!’” Morgenthau continued.

“My father was very ‘hands-off’ and never asked much from me, but one of the few things he did ask was for me to join the board of the museum,” he explained. “That showed me how important it was for him to see it carried on/have a family interest. We were the first spade in the ground post-9/11 in downtown Manhattan. So the two buildings are connected but were built at different times.”

Both buildings were designed by the late Pritzker Prize-winning architect Kevin Roche. Morgenthau is currently the treasurer on the museum’s board.

Unlike the United States Holocaust Memorial Museum in Washington, the Museum of Jewish Heritage, located in Battery Park City on the west side of the southern tip of Manhattan, is closed on Shabbat and has a kosher cafe. This was done at Klein’s request.

“You must have some sanctity for the six million Jews, including 1.5 million children, who were killed. And this was the sanctity which we could all universally agree upon,” he said.

The museum has seen over two million visitors walk through its doors and taught thousands of schoolchildren about the lessons of the Holocaust via its educational programs.

“Unfortunately, atrocities have not stopped,” Klein said. “The Holocaust is a specific word related to the World War era. But even today, in parts of the world, people are being killed only for being who they are. The message is to ‘never forget’ and to keep repeating that.”