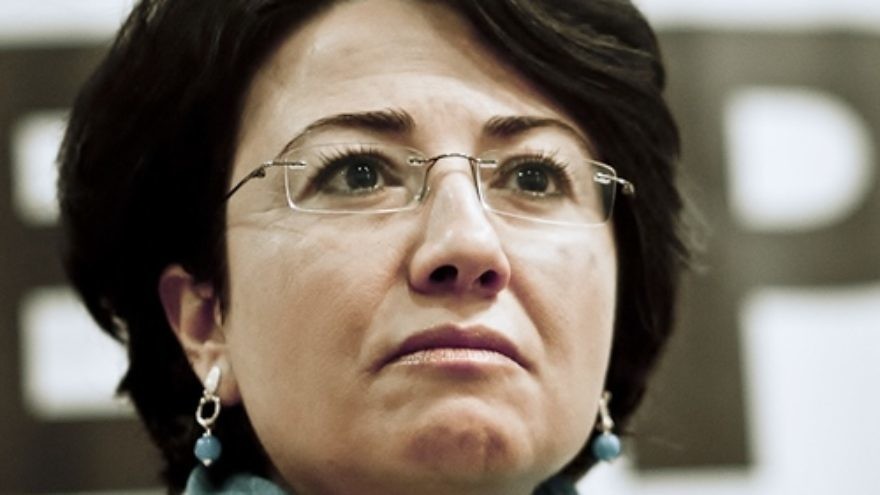 Israel’s parliament this week took action in response to an Arab Knesset member’s public support of a terrorist who murdered an American-Jewish peace activist.

But if you read the account by New York Times correspondent Isabel Kershner, you wouldn’t know anything about the terrorist or his victim—all you would learn is that Israel’s rulers are suppressing dissent and might be infected by “budding fascism.”

It’s as if Kershner and her editors are living in some kind of alternative universe, in which Israel is always guilty, Arab extremists are always innocent, and the 141 Americans who have been murdered by Palestinian terrorists simply don’t exist.

The current controversy began in February, when Haneen Zoabi and two other Arab Knesset Members (all from the Balad Party) paid a solidarity visit to ten families of Palestinian terrorists who were involved in recent attacks. One was the father of Baha Alyan.

For those who don’t recognize Alyan’s name, let me refresh your memory.

In October 2015, Alyan and fellow-terrorist Bilal Ghanem armed themselves with guns and knives, and boarded a bus in Jerusalem. One of the passengers was 78-year-old Richard Lakin, a civil rights veteran from Connecticut. Lakin “taught English to Israeli and Palestinian children” in Jerusalem and “never missed a peace rally,” according to his rabbi. The cover photo on Lakin’s Facebook page featured a Jewish child and a Palestinian child under the heading “Coexist.” Of course, none of that matters to Palestinian terrorists. They kill left-wing Jews, they kill right-wing Jews. It’s all the same to them.

Nor were Alyan and Ghanem deterred by the fact that Lakin was obviously an elderly man. They stabbed him in the face and chest. But that wasn’t enough. They also shot him in the head.

How does Haneen Zoabi feel about the murderer of an American-Jewish peace activist? She made her feelings very clear during her visit to the terrorists’ families. The purpose of the visit was to dramatize their demand that Israel surrender the bodies of the dead murderers. Alyan’s father, Muhammed, was the leader and spokesman for the families. According to the Palestinian news agency Ma’an, the meeting began with a moment of silence, evidently to honor the dead terrorists. That was followed by “a reading from the Koran,” by Muhammed Alyan.

Zoabi and her colleagues “emphasized their Palestinian identity,” Ma’an reported, and “said they will do all they can to pressure Israeli decision-makers so that the bodies will be buried…The [Knesset members] saluted the families’ strong stance and their endless struggle against [Israeli] aggression.”

Afterwards, Zoabi’s Balad Party posted a description of the meeting on its official website. The report referred to Alyan and the other dead terrorists as “shahids,” or martyrs, the highest term of Islamic religious honor. Balad also posted a video message by Alyan’s father, according to Palestinian Media Watch. In his message, Alyan called the visit by Zoabi and company “warm and productive,” and praised them for “listening to the suffering and pain of the shahids’ families.” He also said Zoabi et al planned to meet with the terrorists’ families again.

In response, Micah Lakin, the bereaved son of Richard Lakin, called on Knesset Speaker Yuli Edelstein to remove the Balad Knesset members’ parliamentary immunity, so they could be prosecuted for praising terrorists. Balad denounced Lakin and other critics of Zoabi as “the trumpets of fascism inciting against us.”

Balad secured a temporary reprieve, when Edelstein announced that he did not have the authority to take away Zoabi’s immunity. That prompted other Knesset members to introduce the legislation which the Knesset passed this week, and which so outraged Isabel Kershner and the New York Times.

It’s actually a very mild law. It permits the removal of immunity only if 90 out of the Knesset’s 120 members vote to do so. Even the New York Times grudgingly conceded that the rules “make the process difficult to carry out.” But that did not stop Kershner from asserting—in what was allegedly a news story—that the law “has added to the sense” (whose?) that Israel’s “conservative government” is “pushing questionable measures” (questioned by Kershner, that is) that some say are “indicative of ‘budding fascism.’”

There are so many troubling elements to this episode. There is the disturbing specter of an Arab Knesset member exploiting her parliamentary immunity to endorse terrorists. There is the grotesquely misleading coverage by the New York Times. And then there is the perplexing indifference of many American Jews. U.S. Jewish organizations—especially Richard Lakin’s old friends in J Street and Americans for Peace Now—should be speaking out loudly against those who praise Richard’s killer. Why are they silent?