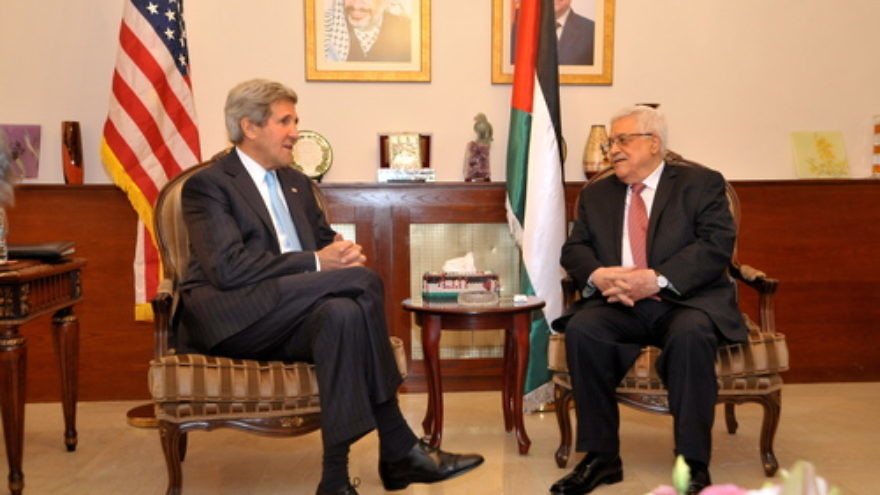 Just when you thought Secretary of State John Kerry couldn’t get any weaker on the problem of Palestinian incitement and violence, he did.

Kerry met with Palestinian Authority (PA) President Mahmoud Abbas in Amman, Jordan, on Feb. 21, against a backdrop of daily Palestinian stabbings of Israeli women and children, and non-stop anti-Jewish incitement in the official PA press, radio, and television.

Yet the secretary of state did not threaten to withhold the Obama administration’s annual $500 million aid package to the PA over the incitement. He didn’t even threaten to reduce the aid.

Incredibly, Kerry didn’t even demand that the PA stop the incitement or the violence. Here’s how State Department spokesman John Kirby described what Kerry said to Abbas: “The secretary continued to urge for calm and a decrease in violence, incitement and inflammatory rhetoric.”

“A decrease.” Not an end to violence—just a decrease.

Note that the PA has one of the largest per-capita security forces in the world. Moreover, the State Department’s own annual human rights reports acknowledge that PA police and security officers routinely imprison and torture the PA’s political enemies. In other words, the PA has proven itself to be fully capable of squashing troublemakers, if it so chooses. If it wanted to stamp out anti-Israel terrorists, it could.

And obviously the PA could stop the incitement at any time, if it wanted.

Consider a few of the examples of the vicious incitement in the PA media—or by the Fatah faction, which Abbas chairs—in the days preceding the Kerry-Abbas meeting:

—Fatah’s official Facebook page featured a photo of a bleeding terrorist on top of a huge map of Israel, with the caption: “This is the blood that drew the borders of the State of Palestine.” (Feb. 14)

—A cartoon distributed by the PA depicted Israel as a giant snake attacking Muslim and Christian religious sites. (Feb. 5)

—A senior adviser to Abbas, Sultan Abu Al-Einein, said this about the Palestinian knife-terrorists in Jerusalem: “Blessings to our Martyrs, the residents of Jerusalem who had the honor of igniting the first spark of this activity…We bow before every drop of blood that has dripped from our children and women, and bow the head before every Martyr and Martyr’s mother….” (Jan. 16)

Kerry should have walked into his meeting with Abbas holding a copy of Al-Einein’s speech in his hand. He should have demanded that Al-Einein be fired and that Abbas make a nationally broadcast speech denouncing what Al-Einein said—and condemning the Palestinian knifers. And Kerry should have said that U.S. aid would be halted if Abbas did not take those steps within 48 hours.

Abbas would have seen that the United States means business. He could not have ignored such a threat.

Instead, Kerry spoke weakly of the need to “decrease” the incitement and violence. He couldn’t even bring himself to say that the incitement and violence must be halted. Kerry’s timid stance guarantees not only that there will be no decrease; in fact, there will be an increase. Because the PA sees that it can do anything it wants, with no consequences.

The PA can call terrorists “martyrs” and “role models.” The PA president’s own adviser can publicly salute “every drop of blood” that the terrorists shed. And all the Obama administration will do in response is slap Abbas’s wrist. Shameful.

Stephen M. Flatow, a New Jersey attorney, is the father of Alisa Flatow, who was murdered by Palestinian terrorists in 1995.